Diana van der Klugt, a district councillor, told The West Sussex County Times that Sedaris was a “welcome sight” to residents of Horsham District “as he tirelessly and painstakingly goes about gathering up the litter so thoughtlessly discarded.”

Susan Pyper, lord lieutenant of West Sussex, added that Sedaris’ efforts to reduce community blight made him a “real local hero,” that inspired others, the County Times reported.

Sedaris told the County Times that when he first moved to the area several years ago, he was surprised by the amount of trash on the streets. “I’m angry at the people who throw these things out their car windows, but I’m just as angry at the people who walk by it every day. I say, pick it up yourself. Do it enough and you might one day get a garbage truck named after you,” Sedaris said.

Although Sedaris’ recent book Let’s Explore Diabetes With Owls reached No. 1 on the New York Times nonfiction best-seller list, the author might be better known in his U.K. home for his obsession with walking and picking up litter, Gawker reports. The County Times wrote an addendum to their article about Sedaris’ celebrated trash-collecting habit to explain his international fame.

Sedaris wrote in The New Yorker in June that his use of Fitbit, a wearable pedometer, encouraged him to walk farther every day with “ a heavy bag of garbage” in tow. “On foot, nothing escapes my attention: a potato-chip bag stuffed into the hollow of a tree, an elderly mitten caught in the embrace of a blackberry bush, a mud-coated matchbook at the bottom of a ditch,” Sedaris wrote.

The author now spends nine hours a day walking 60,000 steps, which is about 25 miles, picking up trash along the way. 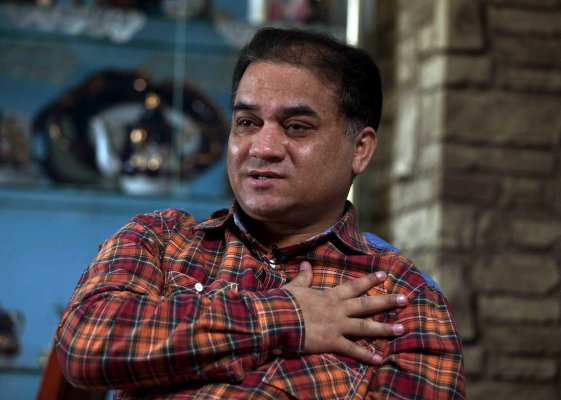