Maggie Gyllenhaal: "I Relate to Panic"

In Maggie Gyllenhaal’s crackling new series, The Honorable Woman, she plays a high profile business executive with dealings in Israel and Gaza. So…..pretty topical. Her character, Nessa Stein, sleeps in an ultra secure fingerprint-operated panic room. Gyllenhaal doesn’t have one of those but says she understands panic.

“The panic comes when you think you’re supposed to be someone you can’t possibly be,” Gyllenhaal, 36, said during an interview with Time for the 10 Questions page. Just as her character goes from someone who’s “expected to be extraordinary and remarkable all the time” but comes unglued as the series progresses, she feels pressure to perform herself, to be what others expect her to be.

“I feel like so much of my 30s has been that performance not working any more,” she says. Gyllenhaal also talked about what she doesn’t want to talk about: who’s right and who’s wrong in the Israeli-Gaza conflict and her disappointment in President Obama. She also shared her nuanced feelings about feminism. “I do sometimes take issue and have almost all my adult life with the kind of old-school feminism that cuts out the complicated gray areas,” she says, like when people are considered “difficult” instead of as “creative.”

The Honorable Woman airs Thursday nights on Sundance. Gyllenhaal’s interview can be read in full by subscribers in this week’s issue of TIME. 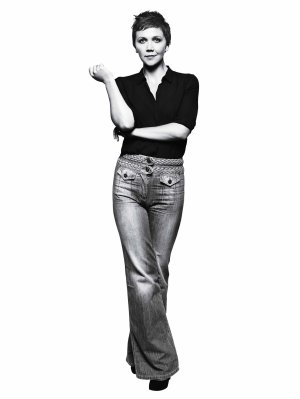 10 Questions With Maggie Gyllenhaal
Next Up: Editor's Pick