Who's to Blame for The Bachelorette's Slut-Shaming?

&nbsp;You can change notification settings in the options pageClose

Republicans CLAIM they’re upping their digital game yet they have yet to make a ‘***lawless’ parody video about Obama. Long way to go guys.

Pretty hard to see @SDNYnews going quite this far out on a limb if nobody’s getting indicted. nytimes.com/2014/07/31/nyr…

Rand Paul wants MSNBC “hacks and cranks” to apologize to him on TV “for 24 hours”: slate.me/1nWuWiG

less than 1 minute ago from Adobe® Social

less than 1 minute ago from Hootsuite

Fox News The Five cohost Bob Beckel called The Bachelorette’s Andi Dorfman a “slut” on his show Tuesday. It’s a demeaning and infuriating comment that caters to double standards for women and men, but it’s also the kind that The Bachelorette thrives on.

Why did Beckel make the comment about Andi and not the dozens of women on these shows that have come before her? For those of you who don’t keep up on reality TV news, a sort of bombshell was dropped on an otherwise dull season of The Bachelorette Monday: the runner-up of this season, Nick Viall, broke an unspoken rule on Monday night: he talked about sex.

Both The Bachelor and The Bachelorette walk a fine line between prudishness and salaciousness by implying sex without ever explicitly discussing it. This tricky balance comes to a head in the third-to-last episode of each season when that season’s Bachelor or Bachelorette can opt into sharing the Fantasy Suite with any or all of the three remaining contestants vying for his or her heart. The two sleep in the same room (littered with candles and rose petals, though apparently not condoms) overnight, and the cameras stop filming. Sex is implied, but any footage or discussion of it is edited out.

Until Monday, on the show’s live after show. “If you weren’t in love with me, I’m just not sure why, like, why you made love with me,” Nick said to Andi on the show, mentioning that their night together was, to him, “fiance-type stuff.”

Andi responded that his question was “below the belt” but reassured him that the feelings she had shared with him were real.

(N.B. Andi shared the Fantasy Suite with two of the remaining three contestants. Most Bachelors and Bachelorettes will spend the night with all three.)

The immediate reaction on Twitter was that Nick was a crazy stalker who just slut-shamed Andi as revenge. The secondary fallout, however, has been pointed at Andi. Enter, Fox News.

“She’s a slut!” Bob Beckel said on his show. “I’m not kidding you. She sleeps with someone else, and then doesn’t tell the guy about it. This is what America’s come to, this crap.”

Panelist Andrea Tantaros responded with outrage: “Are you kidding me right now? Excuse me, Bob. You probably sleep with a different woman every night.”

“I’m not some Bachelor or Bachelorette,” he shot back.

Even if Nick didn’t intend to slut-shame Andi with his question, others inevitably picked up on his very public revelation about their reality TV relationship and did the deed for him.

And I honestly do believe Nick did not intend any harm. Nick’s entire M.O. this season of The Bachelor has been being skeptical of the process in the beginning but allowing himself to become vulnerable enough to fall in love with Andi on his “journey.” The show also teased that Nick was notoriously bad with breakups (this one is no exception), and he was visibly shaking during their face-to-face conversation. I would like to (perhaps optimistically) believe that Nick was truly hurt and trying to be honest about his feelings when he asked Andi that question, and simply disregarded the show’s concocted and unspoken rule that one does not talk about sex.

And if Nick was a woman, this complaint would never be considered some sort of insult to a male Andi. It wouldn’t reflect poorly on Andi if she were a man who had had sex with both contestants. We wouldn’t see complaints on Fox News.

However, Nick’s question has a problematic undertone: he is implying that Andi ought not sleep with someone unless she is in love with him.

And even though this franchise has aired for 12 years under the same premise, we still don’t like to think about the fact that people are having sex with multiple people on this show.

Correction: we don’t like to think about women having sex on the show.

After all, the men are allowed to be “players.” In the “Men Tell All” episode before this year’s finale, it was revealed that one of the contestants failed a lie detector test about the number of women he has slept with, saying previously that he had slept with less than 20. The audience laughed. When Nick asked his question, jaws dropped.

It’s 2014, so Andi has the right—like any other Bachelor or Bachelorette or human being—to have sex for a myriad of reasons besides love. Plus, the show is also constructed to make her develop feelings for more than one man at a time, so it shouldn’t be shocking that she kisses or sleeps with or does whatever with multiple men.

Nick’s question actually reminds me of an incident from the last season of The Bachelor in which a contestant named Clare showed up at Bachelor Juan Pablo’s room at 4 a.m. and invited him for a swim in the ocean. They swam—and then some. Again, the show danced around the sex, but it was heavily implied.

After the incident, Juan Pablo essentially slut-shamed Clare for having sex with him—even though he consented at the time. “Maybe it wasn’t right,” he told her on the show. “I have a daughter, I don’t want her to see what happens, if she sees it.”

Clare (understandably) was mortified because she believed she was a consenting adult having sex with another consenting adult. “I knew when we were in the ocean, that it was a mutual feeling. If he didn’t think it was right he shouldn’t have done it. I would have respected that,” she said to the camera as she cried.

Again, the woman is blamed for seducing the man, for having sex, for not waiting until she is in love. (Juan Pablo uses his daughter and family as a weapon, contrasting Clare to a motherly figure for his daughter and essentially calling her a slut.)

So if you’re a woman, it’s best not to enter the Bachelor universe. Talk of sex is frowned upon, but inevitable. Though the show itself doesn’t encourage slut-shaming—Juan Pablo did that all on his own—clearly the audience wants to use the show as a platform for slut-shaming, as happened with Nick this season. After 12 years, tacit agreements about avoiding sex talk are breaking down. Will anyone try to “pull a Nick” next season and bring up sex or even use sex talk as a strategy? Will the producers embrace this brave new world of candidness? If so, talking heads like Bob Beckel will be waiting in the weeds, ready to cry “slut.”

Most Popular on TIME
1
What the Freemasons Taught the World About Secrecy
2
Why the U.S. Is Losing the War On COVID-19
3
How U.S. Sanctions on Hong Kong Could Impact Banks 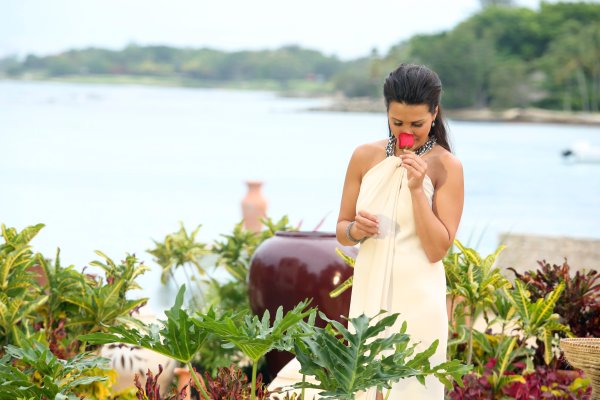