There are 1,725 words in the latest resolution released by the United Nations Human Rights Council, which cynically chastises Israel for so-called “human rights violations” in Gaza.

Nowhere among those 1,725 words will you find the name of the terror organization that is truly responsible for every civilian death and every human rights violation in both Israel and Gaza: Hamas.

Instead of focusing on actual human rights violators around the world, as this international body was created to do, the UNHRC keeps its main focus on Israel—a nation that has gone to extraordinary lengths to protect and preserve the lives of civilians, both during this latest conflict and throughout previous defensive responses to Hamas’ terror.

A nation, Israel, which Colonel Richard Kemp, the Former Commander of British Forces in Afghanistan, has said “did more to safeguard the rights of civilians in a combat zone than any other army in the history of warfare.”

Since its inception in 2006, the UNHRC has released a total of 103 resolutions. Astonishingly, 56 have focused on criticizing Israel. The UNHRC has held a total of 21 special sessions to address dire humanitarian crises throughout the world. One has addressed Sudan, another Sri Lanka, another Ivory Coast and another Libya—while 7 of the 21 special sessions have irrationally targeted Israel.

While the UNHRC goes after Israel, it has completely ignored Hamas’ actions. There have been more than 2,600 rockets lobbed by Hamas at Israel. But you’ll find the word “rocket” appear only once in this latest resolution.

Hamas makes no secret of its intentions. This terrorist organization openly states that it deliberately fires rockets at Israeli civilians and calls for the kidnapping and murder of all Israelis.

Even the Palestinian representative to the UNHRC, Ambassador Ibrahim Khraishi, stated in a July 9 interview with Palestinian television that such attacks against Israel violate humanitarian law. He said, “the missiles that are now being launched against Israel, each and every missile constitutes a crime against humanity, whether it hits or misses, because it is directed at civilian targets.”

What makes Hamas’ actions a double war crime is that they target civilians in Israel while exploiting civilians in Gaza and using them as human shields.

Hamas is building its terror command centers and weapons storage facilities among schools, hospitals and mosques, showing no regard for civilian lives. Israel’s concerted efforts to avoid harming uninvolved civilians have been well documented. Hamas instructs the people in Gaza to ignore Israel’s phone calls, leaflets and text messages, warning civilians of pending attacks against terrorists. Knowingly, they put Palestinians in harm’s way turning them into propaganda tools.

Hamas spokesman Sami Abu Zuhri said in a television interview earlier this month, “the fact that people are facing Israeli warplanes bare-chested to protect their homes, I believe this procedure has proved its efficiency. And we in the Hamas movement call on our people to adopt this procedure.”

Where is the condemnation for this war crime? Where is the so-called “Human Rights Council”?

UNHRC’s mechanisms for voting and membership seem designed to protect some of the worst human rights violators in the world. This is an organization whose elected membership has included such stalwarts of human rights as Saudi Arabia, Cuba, Iran and Libya under Muammar Qaddafi. Israel is the only country that is on the UNHRC’s “standing agenda” to be debated at each session—not Syria, not the Congo, not Sudan—but the only democracy in the Middle East.

There have been more resolutions aimed against Israel than all 191 countries in the world, combined.

The real tragedy is, of course, the suffering that civilians in Israel and Gaza are experiencing because of Hamas’ terrorist actions and motives. Hamas has disrupted the lives of millions of Israelis, forcing us into bomb shelters on a daily basis. Hamas’ decision to ignore and reject ceasefires, divert international aid meant to restore basic infrastructure in Gaza into the production of more weapons and an underground network of terror tunnels and, most heinously, their decision to use civilians as human shields are all evidence of how Hamas continues to perpetuate the suffering of their own people in Gaza.

Instead of wasting its time on these misguided, one-sided resolutions that antagonize Israel, the UNHRC must turn its attention to true human rights violators throughout the world, especially terrorist groups like Hamas. Hamas and its ideological partners in Al-Qaeda, ISIS, Boko Haram and Hezbollah are committed to terror. They stand against the most basic and natural human rights, they have no regard for human life, they mistreat and violate the rights of women and they oppose all believers in free speech and democracy.

The UNHRC must shift its focus to eradicating these crucial injustices facing humanity today, and abandon its politically motivated and cynical agenda to target Israel.

Ambassador Ido Aharoni is the Consul General of Israel in New York. 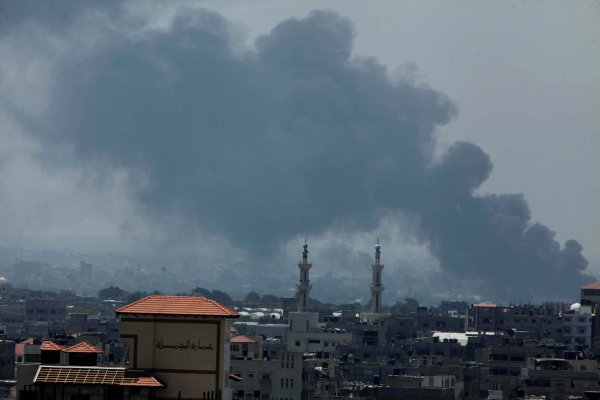 In Ramallah, a Wedding Stands Against the Chaos and Hate
Next Up: Editor's Pick