Men have been blaming their screwups on women ever since the Garden of Eden. Because Adam totally didn’t mean to eat that apple! He only did it because that crazy Eve chick tricked him into it. She must have had a crush on the snake.

This week, former Virginia governor Bob McDonnell’s defense team started bringing witnesses to testify about Maureen McDonnell’s craziness and the former governor’s saintliness. The couple is facing federal corruption charges related to luxury gifts and loans they accepted from a political donor. The defense strategy so far has been to pin the blame for the whole mess on the ex-governor’s wife, saying she had a “crush” on big donor Jonnie Williams, but wasn’t a public official herself so lavish presents to her don’t count as corruption.

Williams, who testified for federal prosecutors under a generous immunity deal, denied any romantic intrigue with Mrs. McDonnell, saying his relationship with the family was a business transaction to help sell health supplements through his company, Star Scientific. “I thought the governor could help bring this product to the marketplace, and it was not the right thing to do,” he testified.

But the defense is arguing that the governor didn’t have anything to do with the $165,000 in cash and gifts that Williams gave him over a two-year period, it was just little ol’ Maureen being a silly woman in love. Love makes women dumb, right?

Longtime McDonnell aide Janet Vestal Kelly testified for the defense on Monday, calling the former governor “Mr. Honest,” but said his wife was “divaish” and “pathologically incapable of taking any responsibility.” She explained that it was “well known” that Maureen McDonnell would “hide things,” and that she seemed “kind of flirty” with Williams. Kelly said she didn’t want to “pile on” the former Virginia first lady, but that her staff even worried that Maureen McDonnell might be mentally ill and they once staged a mutiny because she was so difficult to work for. The defense also presented a letter signed by Maureen McDonnell’s staff detailing the “worst kind of bullying.” And on Tuesday, Maureen McDonnell’s sister-in-law, also named Maureen McDonnell, testified that she was “very manipulative, very unpredictable and very deceptive.” Suddenly, it’s the first lady’s personality that’s on trial, not her husband’s role as an elected official.

It’s possible that Maureen McDonnell, the former governor’s wife, is the lovesick crazy woman the defense team is making her out to be (she did text Williams: “I just felt the earth move, and I wasn’t having sex” after an earthquake.) But it’s also possible this is an elaborate ruse to blame the wife in order to get both McDonnells out of some serious prison time. (They face 14 counts of public corruption, obstruction of justice and lying on financial documents.) This could be a clever experiment in political alchemy: by transforming a corruption scandal into a sex scandal, it puts the focus on the woman’s behavior instead of the money trail. And it makes sense: sex scandals are easier for the public to understand, and blaming the woman tends to take some of the heat off the man — just ask Paula Broadwell or Rielle Hunter.

But now “blaming the woman” (or using a woman’s behavior to distract pesky critics and prosecutors) is becoming a catchall strategy for exonerating male politicians from calamities that might not have much to do with sex at all. New Jersey Governor Chris Christie said he was “blindsided” by the scandal surrounding the George Washington Bridge closures in Fort Lee, N.J., which he says was orchestrated by his aide Bridget Anne Kelly (who was later publicly shamed for a “personal relationship” she had with another staff member). Chinese politician Bo Xilai last year blamed his “crazy” wife for embezzling government money and taking bribes (she was convicted in 2012 of murdering a British business associate). Newt Gingrich staffers blamed the collapse of his 2011 presidential campaign on a takeover by his wife Callista. And former Alaska Senator Ted Stevens blamed the $250,000 worth of home renovations from a wealthy oil contractor that led to federal corruption charges in 2008 on his wife Catherine (an investigation later found that prosecutors withheld evidence that would have helped Stevens, who lost his Senate seat and then died in a 2010 plane crash). None of these were explicitly sex scandals, but they were still spun as the woman’s fault.

Of course, the woman isn’t always blameless — for Stevens, at least, there might have been some truth to his claim that his wife paid the renovation bills and he might not have known about the thousands of dollars worth of gifts. And it’s possible that Maureen McDonnell did accept Williams’ money without her husband’s knowledge (although this picture of the governor driving Williams’ car makes that seem unlikely). Some lawyers say Bob McDonnell’s “crush” defense is so nutty it just might work, others say it could be the truth. But it’s still a mighty convenient tactic, and it’s not just used by men; Hillary Clinton was all too willing to blame Monica Lewinsky for the affair with Bill, even though Lewinsky was a young, inexperienced intern and Bill Clinton was the President of the United States.

The trend could be an unfortunate by-product of women’s rights: as women are seen as increasingly capable of succeeding, they’re also seen as increasingly capable of screwing up. For example, Mary Todd Lincoln was famous for overspending on White House decorations and falsifying spending records, but Lincoln didn’t try to blame any of his political woes on her (then again Honest Abe had bigger fish to fry).

There’s an old saying that says, “Behind every great man, there’s a great woman.” These days, it seems the inverse is also true: in front of every embarrassed man is an embarrassing woman. 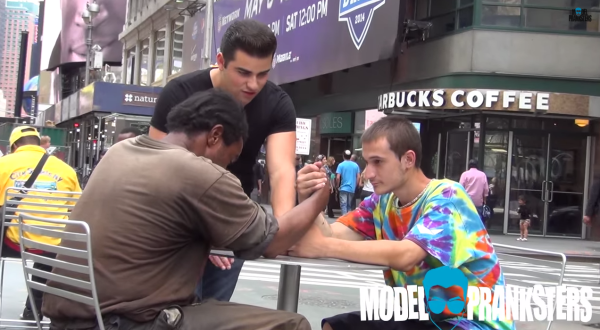 Using Homeless Guys as Reality Show Props is Offensive
Next Up: Editor's Pick