Make Chaste: How the Faith-Based Counterpart to 50 Shades of Grey Came to Be

When Variety announced this week that the 50 Shades of Grey movie would have some competition in its Valentine’s Day opening weekend next year, the timing was impeccable: interest in 50 Shades had recently returned to fever pitch, with the release of the first trailer (which you can watch, above, for the umpteenth time) and that meant that the anti-50 Shades brigade was out in full force too.

That’s where Old Fashioned comes in.

“A former frat boy and free-spirited woman together attempt the impossible, an old-fashioned courtship in contemporary America,” reads the movie’s logline. The premise involves a romantic male lead who makes a commitment to not be alone with his intended until after marriage. It is, producer Nathan Nazario says, an “unconventional approach to romance” — and pretty much the exact opposite of the sex-contract-centric 50 Shades. As Variety notes, Old Fashioned’s distributor Freestyle Releasing has had success with that kind of “unconventional” before, having released God’s Not Dead earlier this year.

The raunchy novel by E.L. James that started it all was published in 2011, but Old Fashioned‘s writer-director-star Rik Swartzwelder tells TIME that he’d been working on the screenplay for a decade. “I’m a huge cinema buff and I see all kinds of movies but I had never seen a film that reflected my dating life,” he says. That inspired him to create something that would.

Swartzwelder describes the film as “not a religious film, per se” but “a film with faith,” which was financed by individuals who believed in the story. The film was shot in late 2011 and, though Swartzwelder says 50 Shades wasn’t on his radar while he was coming up with the story, the team was aware of the phenomenon by the time they hit post-production. And even if the movie didn’t start out having anything to do with the bigger blockbuster that will share its release date, it was a response to what its creators see as a culture that celebrates ideas like those in 50 Shades but doesn’t seem to create stable romantic relationships. Nazario cites the American divorce rate as evidence that there needs to be an alternative to the mainstream way of finding a mate, and making a movie that presents one such alternative is one way to help that along.

So, despite the lack of a concrete tie between the two movies, the timing is — obviously — not a coincidence.

“For a small independent film with no stars, timing is always a consideration,” Nazario explains. “We were looking ahead at dates and observed that 50 Shades had put a stake on Valentine’s Day. We’d actually been thinking about that date and, when we saw that, it seemed like a good opportunity.”

Still, its audience will have to wait a few months to find out what Old Fashioned‘s creator really thinks of 50 Shades. “The answer to your question is the film [Old Fashioned] itself,” says Swartzwelder. “I’ll let people draw their own conclusions.” 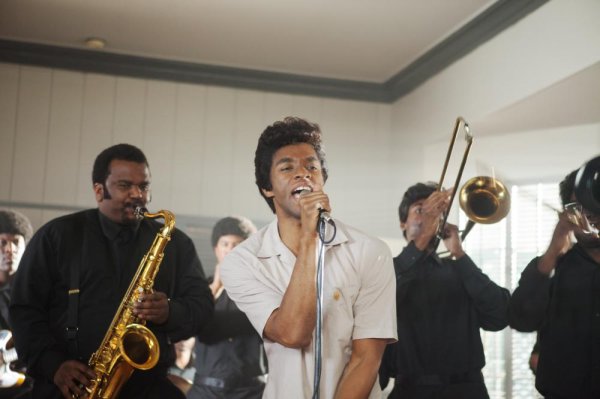 Get On Up: James Brown's Got a Grand New Bag
Next Up: Editor's Pick