Vladimir Putin invaded and annexed Crimea. Instead of condemning him for this outrageous act, however, some think it is more important to blame President Obama for this tragedy. The analysis is flawed. The historical amnesia is frightening.

President Obama’s “reset” did not tempt Vladimir Putin Obama to invade Crimea. Instead, the reset aimed to engage the Russian government in the pursuit of common interests, but not at the expense of our relations with countries on Russia’s borders and not to the detriment of advancing universal values around the world, including in Russia. While Russia’s Prime Minister Dmitry Medvedev was still president, the reset produced results for American national interests. We signed and implemented the New Start Treaty, which contains important verification measures that continue to work today. We expanded the Northern Distribution Network, which developed into a vital transit route for supplying our soldiers and civilians in Afghanistan. With Russian support, we passed UN Security Council Resolution 1929 in the spring of 2010, which put in place the most comprehensive set of sanctions ever against Iran. And we worked closely with others to facilitate Russia’s accession into the World Trade Organization, which now binds Russia to follow international trade and investment norms.

Would the United States have been better off not work with Russia and not achieve these outcomes? My answer is no.

While pursuing these goals with the Russian government, the Obama administration also militantly practiced as second track of engagement with Russian civil society. When President Obama first visited Russia in July 2009, he spent the first day engaging government leaders. With the exception of a breakfast with Prime Minister Putin, he spent his entire second day engaging Russian society, first students, then business people, then NGO leaders, and finally political opposition leaders. During his last visit to Russia in September 2013 to attend the G-20 summit, he continued to practice dual-track engagement, first meeting first with Putin and then just a few hours with some of Putin’s fieriest non-governmental critics. No other G-20 leader met with civil society leaders. Putin did not like it. Obama did it anyway.

When Putin became president for a third time in the spring of 2012, it became quickly clear that he saw the United States as an enemy — a competitor for influence around the world and a fomentor of revolution in the Middle East, Russia, and Ukraine. With Putin in the Kremlin, the reset was over. Some important cooperation started in the first years of the reset continued, including most importantly the P5+1 process regarding Iran. But few if any new areas of cooperation emerged, compelling the Obama administration to adjust its approach. By last summer, the agenda of US-Russian cooperation was so thin that President Obama decided to cancel a two-day summit planned for Moscow in September 2013, hardly a gesture of weakness or accommodation towards Putin.

In fact, in my years working as U.S. Ambassador in Russia, I was constantly amazed out how much power and agency the Russian government erroneously assigned to the United States. Russian leaders believed that President Obama started the Arab Spring in Tunisia, and then brilliantly executed a series of regime change plays throughout the region. They also believed that the U.S. had the power and intent to foment revolution against the Putin regime. They labeled me as the main instigator! And of course in Ukraine, Putin firmly believed again that the almighty United States orchestrated the “coup” against former Ukrainian President Yanukovich, as if the Ukrainian people had nothing to do with it.

It was not the reset or Putin’s perception of Obama’s weakness that created the permissive conditions for Russia’s invasion and annexation of Crimea. Rather, Putin could review 70 years of history of Russian aggression in Eastern Europe and correctly conclude that the United States had no means to stop his invasion plans. George W. Bush did not prevent Russia’s invasion of Georgia. (Some argue that had Obama bombed Syria last fall, Putin would not have invaded Crimea, but Bush’s invasion of Iraq in 2003 did not stop Putin’s invasion of Georgia). Few would accuse President Reagan of being naïve or weak regarding the Soviet Communist regime. Yet, when Soviet leader Leonid Brezhnev colluded with Polish General Jaruzelski to crush Solidarity and implement martial law in December 1981, Reagan could not deter this brutal crackdown. President Johnson, of course, did not prevent Brezhnev from invading Czechoslovakia in 1968. And President Eisenhower, even armed with his rhetorically muscular “roll back” of Communism policy, failed to halt the Soviet invasion of Hungary of 1956. And obviously, President Roosevelt was unable to compel the Red Army to retreat back to Soviet borders at the end of World War II.

The record is clear and consistent. Whether Democrat or Republican, no U.S. president has ever succeeded in deterring Soviet military intervention in Eastern Europe over the last 70 years. American responses to intervention, however, did vary radically. President Reagan pursued a much more coercive and robust response to martial law in Poland in 1981 compared to President Johnson’s feeble response to Soviet occupation of Czechoslovakia in 1968.

It is on this debate — how to make Putin pay for his actions — that our national leaders should focus. Debating the extent of sanctions against Russian officials, arguing over the size of the economic assistance package to the new Ukrainian government, debating greater military assistance to the Ukrainian army, considering how large the increase should be of scholarships for Ukrainians to study in the U.S. over the next decade, or jousting over how large the plus up should be for the Freedom Support Act should be in next year’s budgets — these are the important policy questions of our moment. Debating Obama’s weakness only makes our entire country weak.

Michael McFaul is professor of political science and Hoover senior fellow at Stanford University. He served for five years in the Obama administration including as U.S. ambassador to the Russian Federation, from Jan. 2012 to Feb. 2014. 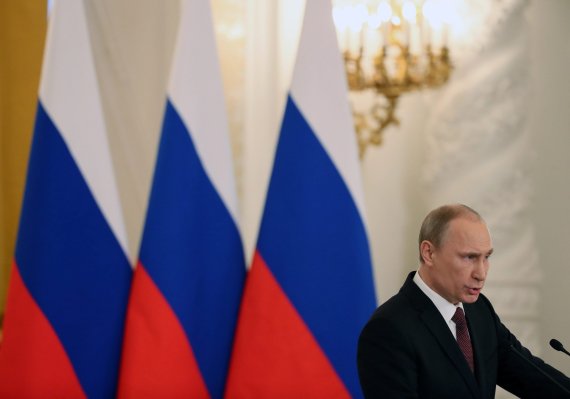