A winged lionfish at the Beijing Aquarium on May 30, 2012.
Mark Ralston—AFP/Getty Images
By Bryan Walsh

If you were trying to create the perfect invasive aquatic species, a fish capable of out-eating and out-breeding anything it comes across, chances are you wouldn’t be able to improve upon the lionfish. The spiny, venomous fish can produce up to 15,000 eggs every four days, and feed voraciously on small fish, invertebrates and mollusks. They also tend to have a hostile territorial attitude to other reef fish and scuba divers alike. Introduce a lionfish into a coastal coral reef, and it can quickly clear the habitat of any competitors.

Since the lionfish—which is native to Indo-Pacific waters—was accidentally introduced off Florida in the 1980s or 1990s, that’s exactly what has happened. The lionfish has been identified as a major threat through the coastal waters of the Atlantic, from North Carolina to the Caribbean. There have been sponsored lionfish derbies, underwater hunts where divers stalk the invasive fish, and restaurants have even tried to make an industry out of harvesting the lionfish, serving them to diners. (They’re not bad, provided you remove the poisonous spikes.)

And starting on Aug.1, Florida will no longer allow the importation of invasive lionfish—though that might seem like closing the barn door after the horse has left, given that the first lionfish introduced into the Atlantic likely came from aquarium, and the population has since exploded. The Florida Fish and Wildlife Conservation Commission will also allow lionfish to be hunted by divers equipped with a rebreather, a machine that recycles oxygen so that divers can remain below the surface for much longer. That might help divers spear a few extra lionfish, but given that a female can produce as many as 2 million eggs in a year, divers will need to be awfully busy to keep up.

The reality is, as the National Oceanic and Atmospheric Administration has said, “it is unlikely that the lionfish invasion can be reversed.” Which means divers should get used to the sight of the striped-lion fish, fins open like a sail, patrolling its new territory. That’s the challenge of responding to invasive species—there is no cure. There is only prevention. 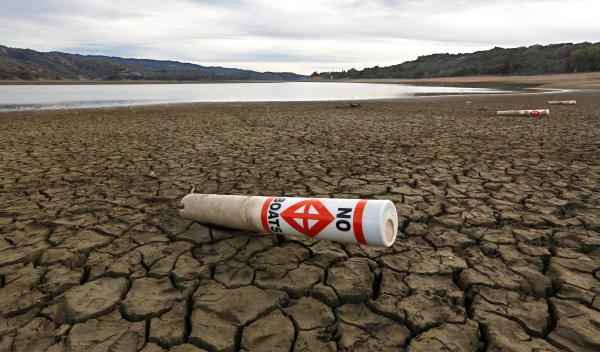 California Tries to Crack Down on Water Hogs
Next Up: Editor's Pick