In Ramallah, a Wedding Stands Against the Chaos and Hate

Weddings in Ramallah usually take place on Saturdays or Sundays. But when my daughter Tania and her in-laws to be were discussing her wedding date, the main concern was to avoid the World Cup finals. The only available date was Friday, July 11th. Little did we know last April, when we met with the priest at the Latin Church in Ramallah with our expected new in-laws, that this July date would be in the crossfires of a war on Gaza in which rockets would be flying all over.

In addition to local friends and family, we were expecting relatives to arrive from Jordan and the U.S. via Jordan bridges, and some straight into Tel Aviv.

As the wedding day neared, we had to reassure friends and relatives that Ramallah was safe. Friends from Nazareth, Jerusalem and Amman were calling us, saying that they are worried about coming. A week earlier, my brother-in-law, his wife and another couple were nearly killed by angry settlers as he was returning from a wedding in Ramallah. The incident caused us all to reserve half a local hotel in Ramallah to ensure that family and guests would sleep in town rather than risk returning home at night.

Our friends coming from the U.S. were bombarded with news about how almost all of Israel was being hit by rockets from Gaza. The news and images were accompanied with voiceover and scrolling text that portrayed Palestinians as merciless terrorists who were carrying out a totally unprovoked attack on innocent Israelis and terrifying the entire country.

Relatives from Jordan who were also invited to attend the wedding were seeing the same images, but with an entirely different subtext. The rockets were given names and the attacks were part of the heroic Palestinian resistance. In addition to the images of destruction and killing, the narrative of the Arab media was of the Palestinian heroes who were presented as nothing short of some kind of Superman that could go through fire without getting hurt.

Both narratives accompanied angry voices refusing a ceasefire and insisting on the continuation of the carnage in order to accomplish some unclear political or, rather, emotional goal.

The American relatives coming via the Israeli crossings on the Jordan River were extensively questioned and interrogated. In one case, after six hours of delay, Israelis finally allowed all but my nephew. The reason this young man, who belongs to the pacifist Mennonite Church, was not allowed to attend the wedding was because he had volunteered a year earlier with the Christian Peace Makers teams, a faith-based group that helps disenfranchised groups around the world. They have missions in Mexico and in the Palestinian town of Hebron. His main job at the time, in a Palestinian town without any Christian Palestinians, was to help kindergarten children cross the street and protect them from rowdy Jewish settlers who feel that the city of Hebron is their God-given territory, irrespective of who has been living in the city for centuries.

Our Mennonite relatives that did make it visited the Tent of Nations near Bethlehem. The farm, owned by a Christian Palestinian family, is dubbed “people’s bridge” and has turned into a Christian retreat for locals and volunteers. This educational and environmental farm has become a target of nearby Jewish settlers. A few weeks earlier, Israeli troops had uprooted some 1,500 fruit-bearing trees, an act the Palestinian Christian owners felt was a prelude to a possible confiscation to make room for the expansion of the nearby Jewish settlement.

One group of relatives from the U.S. were surprised to find us sitting relaxed in a local hotel balcony when they arrived in Ramallah. On their way, the tourist bus driver had an app on his cellphone that would blare a siren every time a rocket was launched from Gaza. After some hot shawarma sandwiches and Ramallah’s best Rukab ice cream, our relatives began to settle in.

Judging by the diametrically preconceived attitudes formulated by mass media, it is difficult to find anyone on the planet that is neutral in this decades-old conflict. Neither stereotypical images of Palestinians as terrorists or as superheroes does much to show the humanity of Palestinians.

The ongoing onslaught of Gaza is being spun, on the one hand, as an act of self-defense. No country can accept being shot at with rockets, is the typical Israeli line. The speakers never tell their audience that Israel is no ordinary country, that it has been holding another people under military occupation for 47 years, that it has brought Jewish settlers into and besieged the occupied areas in contravention of international law. This siege of Gaza for more than seven years hasn’t been approved by any international body, yet no one is able to put an end to this basic right, describing it as a reward to Hamas rather a right to the human beings living in Gaza.

On the other hand, Palestinian fighters facing up F-16 fighter jets and powerful tank and naval shells respond with unsophisticated rockets that have barely caused any fatalities or physical damage—yet has produced much anger. While the war on Gaza takes on an asymmetrical nature when you look at the reported casualties (more than 1,200 Palestinian civilians versus three Israeli civilians), the conflict is never written about with anything but stereotypical adjectives.

A follower of the Israeli narrative hears the word Hamas as if every one of the 1.8 million Palestinians is a Hamas fighter holding a knife in his teeth and waiting to destroy the entire state of Israel. The pro-Palestinian narrative is similarly oblivious of the humanity of the Israelis and the desire of the majority of Israelis for peace irrespective of the fact that their government is being pulled to extreme positions that have included the yet to be proven justification of the war. Even though Israel began the war on an unproven accusation against the Gaza-based Hamas leadership, the fact is that those killed in Hebron, or in Jerusalem as well as the hundreds in Gaza, are human beings.

Neither side, nor their respective supporters and allies, seems aware of the humanity of the other. After an unbearable seven-year-long siege, Gazans want to live in freedom and independence with open borders so they can visit relatives and friends in Cairo or pray in Jerusalem. And Israelis don’t want to have to run to their shelters every time a siren warns of an incoming rocket.

The day after my daughter was born, September 7th 1990, I got a message on my beeper. Israeli soldiers had clashed with Palestinians in Jerusalem’s Al-Aqsa mosque, leaving 17 Palestinians dead.

Despite all obstacles since her birth, my daughter has grown into a beautiful, smart and outgoing young woman. Her wedding and the festivities following it were beautiful and joyful. The bride and groom went to Turkey for their honeymoon and returned. But the war on Gaza has not stopped.

The hatred and the dehumanization have escalated to unprecedented levels on both sides. Neither calls of death to Arabs nor anti-Israeli rhetoric will change the basic problem that continues to fester.

The underlying roots of this conflict are political. No military solution can replace the human aspiration of people to live in freedom and independence. The sooner all parties can deal with these yearnings, the sooner we all can have our humanity back.

Daoud Kuttab is an award-winning Palestinian journalist. He is a columnist with Al-Monitor and a former Ferris Professor of Journalism at Princeton University. Follow him on Twitter at @daoudkuttab.

Write to Daoud Kuttab at daoudkuttab. 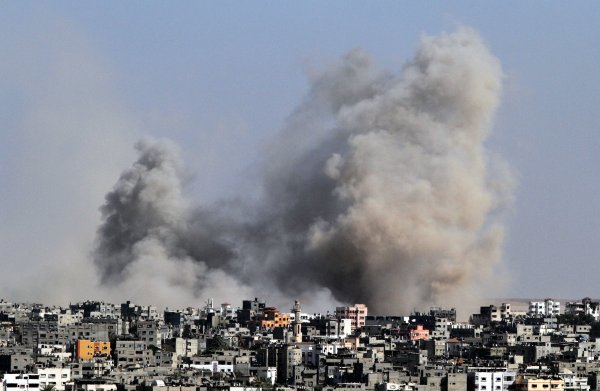 Steven Stotsky: How Hamas Wields Gaza's Casualties as Propaganda
Next Up: Editor's Pick