The U.S. is escalating sanctions on the Russian economy nearly two weeks after the shootdown of a civilian airliner over eastern Ukraine and amid growing violence along that country’s border with Russia. President Barack Obama announced the new sanctions Tuesday hours after the E.U. approved similar measures.

“Today the United States is imposing new sanctions on key sectors of the Russian economy: energy, arms, and finance,” Obama said from the White House.

The U.S. Treasury Department sanctioned three Russian banks: Bank of Moscow, Russian Agricultural Bank and VTB Bank OAO, in an effort to increase “costs” on Russia, Obama announced, while the U.S. government is restricting exports of energy-related parts to Russia.

The new sanctions also apply to United Shipbuilding Corp., the largest such company in Russia. “We have hit five of the six largest state-owned banks in Russia,” a senior Obama Administration official said Tuesday.

The U.S. will also require export licenses for energy-related technology for new Russian deepwater, Arctic offshore and shale projects, according to that official. Additionally, the official said there would be no new Ex-Im Bank transactions with Russia.

“It doesn’t have to be this way,” Obama said, calling on Russia to rein in separatist forces and become a “good neighbor” to Ukraine. “This is a choice that Russia, and President Putin in particular, has made.”

Obama said that since the shootdown of Malaysia Airlines Flight 17 that Russia and “its proxies in Ukraine” had in several ways impeded the crash investigation, including by tampering with evidence. The U.S. government believes that Russian-backed separatist forces deployed an SA-11 surface-to-air missile provided by Russia to shoot down the airliner, likely confusing it with a Ukrainian military aircraft.

Obama said the new sanctions would further weaken the Russian economy, which has suffered from capital flight amid the ongoing crisis, adding that still more sanctions could be imposed if Russia doesn’t reverse course. When asked if the rising diplomatic tensions between the U.S. and Russia represent a “new Cold War,” Obama balked. “No, this is not a new Cold War,” the President said. 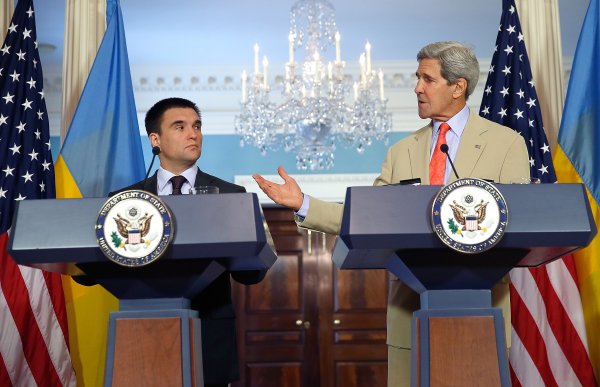 John Kerry Comes Down on Russia
Next Up: Editor's Pick