Zhou Yongkang, then Chinese Communist Party Politburo Standing Committee member in charge of security, attends a plenary session of the National People's Congress at the Great Hall of the People in Beijing on March 9, 2012
Ng Han Guan—AP
By Hannah Beech

For years, as head of China’s police state, Zhou Yongkang was wrapped in an aura of menace. At his disposal was a $110 billion annual budget for domestic security — more than China’s official military spending — as well as reams of dossiers on communist faithful and ordinary citizens alike. As China’s security czar, Zhou could order the downfall of most any individual practically at will. It helped, of course, that his looks followed central casting for the bad guy in a James Bond film: determined jaw, greased-back dyed hair, that uncompromising set to his thin lips.

On July 29, after months of rumors about his downfall, Zhou was placed under formal investigation for “suspected ‘serious disciplinary violation,’” Chinese Communist Party code for corruption and other abuses of power. If Zhou is officially prosecuted by antigraft authorities — and Chinese authorities don’t tend to launch idle investigations — he will be the highest-ranking Chinese leader to be felled for corruption since the Communist Party took power in 1949. Until late 2012, Zhou was a member of the Politburo Standing Committee, the elite clique of communists that rules China.

But since his retirement, the noose around the neck of the now 71-year-old has drawn ever tighter. Several of his family members — who appear to have somehow amassed significant fortunes — are believed to be in detention. Shortly after releasing news of Zhou’s investigation, the People’s Daily, the mouthpiece of the Chinese Communist Party, posted a tweet saying that Zhou Bin, Zhou’s son, had been “arrested on suspicion of illegal business operation.” The tweet was accompanied by an image of a photocopy of Zhou Bin’s ID card.

Dozens of Zhou Yongkang’s subordinates, advisers and acolytes also have been investigated, jailed or publicly shamed. The mass arrests have included men from three main spheres of influence that Zhou once controlled: the populous southwestern province of Sichuan, a state-owned oil-and-gas behemoth and the Ministry of Public Security.

The most dramatic downfall of a Zhou associate was that of Bo Xilai, the former party chief of the southwestern metropolis of Chongqing, who was sentenced to life imprisonment last year for bribery, embezzlement and abuse of power. Bo’s wife was convicted of murdering an English business consultant. The collapse of one of China’s most glamorous power couples brought a touch of Macbeth to the inner sanctum of Chinese politics.

The man who has presided over the dismantling of Zhou’s power network is China’s President Xi Jinping, who has unleashed an anticorruption campaign that has brought down hundreds of Communist Party officials in recent months. Warning that the rot within official ranks could prove an existential threat to a party that has ruled for 65 years, Xi has surprised skeptics who presumed his graft-busting project would fade after a few months. Instead, Xi, who came to power as Zhou retired from the Standing Committee, has vowed that his crusade will capture both low-ranking “flies” and the highest-echelon “tigers.”

Zhou, with his trademark sneer, looks to be a prime example of the latter. He was also, according to some China political analysts, a leader of a Communist Party faction that may have clashed with Xi’s supporters. If that’s true — and there’s no way to prove it, given the cloistered nature of Chinese politics — then Xi’s pursuit of Zhou betrays personal as well as political interest. Whatever the internal politics, July 29 proved an ideal day to announce the Zhou investigation: as China watchers gleefully noted, the date also happens to be International Tiger Day. 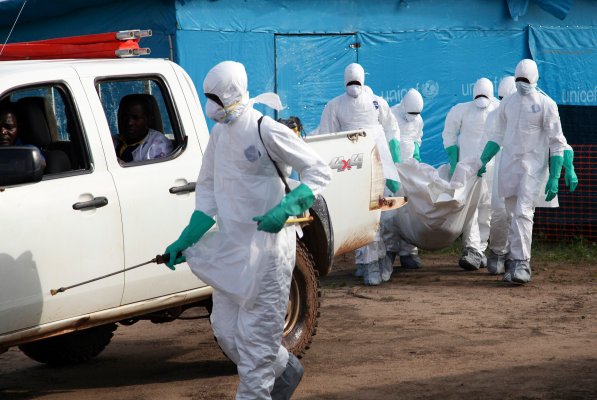 Fears Grow as Ebola Outbreak Spreads
Next Up: Editor's Pick