A Tea Party Tempest in Tennessee

U.S. Senator Lamar Alexander announces the kickoff of his "Standing Up for Tennessee" bus tour at Sullivan's Restaurant in his hometown of Maryville, Tenn., as his wife Honey and State Rep. Art Swann look on on July 25, 2014.
Tom Sherlin—The Daily News/AP
By Jon Meacham

I’ve always thought that Lamar Alexander’s Little Plaid Book, a collection of political wisdom gleaned from more than half a lifetime in the arena, is an underappreciated classic. (My favorite rule is #73, “Walk in Parades,” followed by #74: “If it is the Mule Day parade, walk at the front.”) Subtitled “Rules, Reminders, and Lessons About Running for Office and Making a Difference, Whether It’s for President of the United States or President of Your Senior Class,” the book is the kind of thing that might have resulted if Machiavelli and Dale Carnegie had teamed up to write a primer on Southern politics.

Like other incumbents, Alexander, a former governor who is now seeking his third term in the U.S. Senate, is facing a Tea Party primary challenge, and voters will choose between Alexander and state representative Joe Carr on Aug. 7. While the race is not especially close in the polls, Alexander knows the risks.

The defeat of Eric Cantor in Virginia and the political near-death experience of Thad Cochran in Mississippi have invested Tea Party campaigns like Carr’s with tragic electoral possibilities for incumbents who do not take such incursions seriously. An Alexander victory would signal that the GOP, at least at the senatorial level, has more in common with the passionate pragmatism of Ronald Reagan than with the provocative postings of Sarah Palin.

Alexander is one of the last of a kind—a politician with a passion for governing, and to govern, as we know, is to choose, and choice tends to require compromise, for, like life, politics is not perfectible.

This last point is essential, and it goes to the heart of the Tea Party primary campaigns of 2014. From immigration to Obamacare, Tea Party conservatives are out for total ideological victory—though what might come on the day after is less clear. As Newt Gingrich said in endorsing Alexander, projecting a GOP takeover of the Senate, “As a committee chairman next year, he will play a vital role in ending the Obama era in health and in education. We need Lamar’s experience and shrewdness to fix Washington.”

It’s an old truth: you can’t beat something with nothing, and it takes serious legislators to effect serious change.

I grew up in Tennessee when Alexander was governor and have watched him closely through the years. He is what people ought to want in a senator: an experienced, sensible man with a record of achievement. He first sought public office more than four decades ago. He lost that first gubernatorial race in 1974, but won four years later. He has been a two-term governor, a university president, a secretary of Education, a presidential candidate, and a United States senator. He was one of the early Southern governors who courted automakers to come to right-to-work states in the Old Confederacy—and, as he points out, by end of the 1980s, Tennessee had gone from the third poorest state in the Union to the state with the fastest growing family incomes.

With no state income tax, Alexander used the public sector to create conditions for private-sector growth, including building critical roads while leaving the state with no road debt. He was also an innovator in education. Alexander did all this from 1979 to 1987 with a legislature that was in Democratic hands.

Carr has buzzy endorsements, chiefly from Palin and from Laura Ingraham, who played such a critical role in defeating Cantor for renomination in Virginia. “It’s time for bold colors. Abandon the pastels,” Ingraham told Andy Sher of the Chattanooga Times Free Press. “We need fighters. Lamar’s had his time. He’s had a good run.” Alexander, she added, is “kind of like an old sweater. He was really comfortable and sharp looking at one point, but now it just takes up room in your drawer.”

In endorsing Carr, Palin thanked Alexander for his service but said it was time for a change: “With the new challenges in D.C., the time has come for new leaders who are willing to stand up to the political establishments and the Obama administration and say, ‘no mas!’”

It’s worth remembering, though, that a senator like Alexander has much more in common with the real Reagan—a master compromiser—than any reflexive ideologue has. Reagan would have walked in front of the mules, right along with Alexander, who’s earned at least six more years of such parades.

Correction: The original version of this story incorrectly described Carr. He is a current member of the Tennessee House of Representatives. 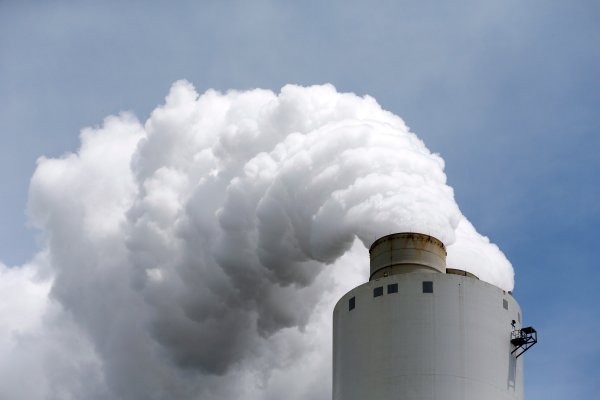 Delay Action on Climate Change by 10 Years and Costs Rocket 40%: Report
Next Up: Editor's Pick