Michelle Nunn speaks to her supporters after winning the Democratic primary for Georgia Senate on May 20, 2014.
Akili-Casundria Ramsess—AP
By Alex Altman

As a Democrat in a Southern state, Senate candidate Michelle Nunn has a tough path to victory. The road became a little bumpier Monday, when a conservative magazine published a series of internal strategy memos outlining the Nunn campaign’s perceptions of the candidate’s weaknesses.

The memos are a guide to practically everything the Nunn campaign worried about last winter—except how to run damage control on the memos themselves.

Obtained by reporter Eliana Johnson of National Review, the documents detail the challenges Nunn must surmount to win election as a moderate Democrat in conservative Georgia. Among the vulnerabilities identified are the perception that Nunn is “too liberal,” that she is “not a real Georgian” and that Republicans will tie her to national Democratic leaders who are deeply unpopular in the Peach State.

The documents warn of weak spots stemming from Nunn’s role as CEO of a nonprofit foundation. They reveal the campaign’s clinic assessment of how it must mobilize traditional liberal constituencies, like African-Americans, Jews and Asians. And they expose the campaign’s plan to sell Nunn with “rural” imagery that might soften up Georgia voters skeptical of a candidate reared partly in the suburbs of Washington, where her father served as a Georgia senator.

According to National Review, the documents were briefly posted online in December.

Beyond the potentially damaging aspects, the memos offer a rare, unvarnished glimpse into the mechanics of running a campaign. They cover everything from scrubbing a voter file to modeling turnout (1.4 million votes is Nunn’s magic number, according to a memo from Democratic strategist Diane Feldman). The documents map the architecture of Nunn’s outreach machine and detail which constituencies to target. Much of the information will reinforce negative impressions of how campaigns work, including suggestions for how to drive a message week-by-week and the ways it can whack Republican opponents.

In short, the memos are a classic example of what is known in Washington as a Kinsley gaffe: when a politician errs by accidentally revealing the truth. (The phenomenon is named after the journalist Michael Kinsley, who coined the phenomenon.) The existence of the memos is not a surprise; any campaign worth its salt undertakes a study of its perceived weaknesses. The Nunn memos are remarkable less for their judgments than for the fact that a hapless adviser apparently posted them on the Internet.

“Like all good plans, they change. But what hasn’t changed and is all the more clear today is that Michelle’s opponents are going to mischaracterize her work and her positions, and part of what we’ve always done is to prepare for the false things that are going to be said,” Nunn campaign manager Jeff DeSantis told The Hill.

From time to time, these leaks happen. In 2007, internal strategy memos from Mitt Romney’s first presidential campaign were obtained by the Boston Globe, including a 77-page PowerPoint presentation dotted with analyses of both Romney’s weaknesses and those of his GOP rivals. Around the same time, Rudy Giuliani’s strategy blueprint materialized online after a leak. The Atlantic nabbed similar documents from Hillary Clinton’s team the following year, revealing her campaign’s concerns about “frontrunner-itis” and its strategy for exploiting Barack Obama’s “lack of American roots.”

Recent polls have shown the Democrat in a tight race with Republican nominee David Perdue, who edged Rep. Jack Kingston in a Republican Senate runoff last week. A Democratic Senate Campaign Committee memo released (intentionally) last week assails the GOP businessman’s “record of putting himself first,” a signal that Nunn’s campaign will borrow a page from the populist playbook President Obama’s advisers deployed against Romney. As they fight to hold control of the Senate, Democrats view the race as a rare pickup opportunity on an unforgiving electoral map.

How much will the leak hurt Nunn’s prospects? It’s tough to say. But when you’re trying to sell a candidate as authentic, a long look at the careful packaging can’t help. 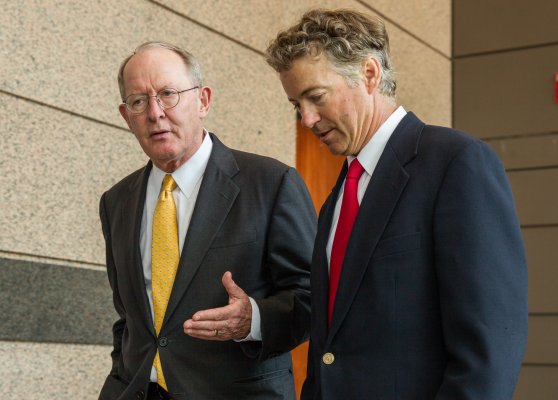 The Tea Party's Next Target
Next Up: Editor's Pick