The Liberian government closed off most of the country’s border crossings Sunday in an effort to curb an Ebola outbreak that has already killed over 670 people across Guinea, Liberia, and Sierra Leone and become the largest outbreak of the virus on record.

President Ellen Johnson Sirleaf said the airport will remain open, but that all travelers coming in and out will be tested for the virus, Reuters reports. “All borders of Liberia will be closed with the exception of major entry points,” she said. “At these entry points, preventive and testing centers will be established, and stringent preventive measures to be announced will be scrupulously adhered to.”

Ebola kills around 90% of those who contract it, although the current outbreak has only killed around 60%. Numerous medical personnel have succumbed to the most recent outbreak, including Dr. Samuel Brisbane, one of Liberia’s most high-profile doctors, who died Saturday.

Two Americans, Dr. Kent Brantly and missionary Nancy Writebol, have contracted the virus and are currently in stable condition, NBC reports. Both worked for North Carolina-based aid group Samaritan’s Purse, and spokeswoman Melissa Strickland said that they are both “alert.”

Brantly and Writebol had followed all CDC and WHO guidelines and worn full protective equipment when treating Ebola patients, including gloves, goggles, face protection, and full body coverings, Strickland said.

Since Ebola is highly contagious, Liberia has also restricted public gatherings such as marches and demonstrations until the outbreak is brought under control. “No doubt, the Ebola virus is a national health problem,” President Sirleaf said in a statement. “And as we have also begun to see, it attacks our way of life, with serious economic and social consequences.” 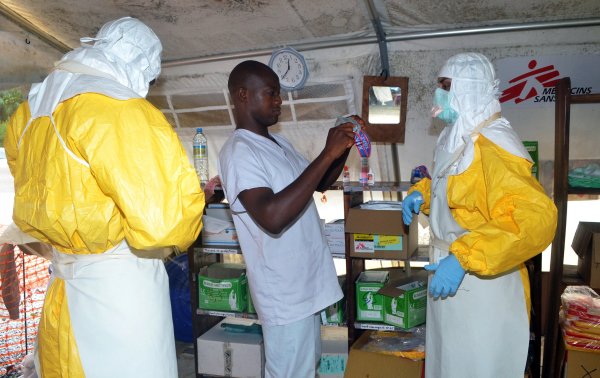 Officials Say Ebola Virus Is Suspected in Nigeria
Next Up: Editor's Pick