Afghanistan: Awash in Guns, as Well as Narcotics

U.S.-supplied weapons like these M-16s in Kandahar, Afghanistan, often lack proper accounting by both U.S. and Afghan authorities, according to a new investigation
SIGAR
By Mark Thompson

The bad news out of Afghanistan this week is that the U.S. military’s accounting for the arsenals the Pentagon is giving to Afghan security forces is plagued by “incompatible inventory systems” that generate “missing serial numbers, inaccurate shipping and receiving dates, and duplicate records,” according to a new report from the top U.S. government investigator inside Afghanistan.

The worse news? The problems become “far more severe” once the weapons are in the hands of the Afghan forces. “Given the Afghan government’s limited ability to account for or properly dispose of these weapons, there is a real potential for these weapons to fall into the hands of insurgents, which will pose additional risks to U.S. personnel, the Afghan National Security Forces, and Afghan civilians,” according to John Sopko, the special inspector general for Afghanistan reconstruction.

Sopko and the U.N. have made clear in recent years that the production of opium in Afghanistan is growing with every passing year. Sopko’s latest report, released Monday, makes clear that Afghanistan is also awash in undocumented American-supplied arms.

As the U.S. pulls its combat troops out of Afghanistan by the end of this year, proper accounting and tracking of the arms become critical for Afghan forces to battle the Taliban — and to keep those weapons out of enemy hands. “Taliban fighters are scoring early gains in several strategic areas near the capital this summer, inflicting heavy casualties and casting new doubt on the ability of Afghan forces to contain the insurgency as the United States moves to complete its withdrawal of combat troops,” the New York Times reported Sunday.

“We’re not talking just handguns and M-16s and AK-47s,” Sopko told TIME correspondents over lunch on Friday. “We’re talking some high-powered stuff — grenade launchers, RPGs, machine guns — anything that one person could use.” His new report says the U.S. recorded improperly, or simply failed to record, the serial numbers of 43% of the nearly half-million small arms the U.S. has supplied Afghanistan over the past decade.

Sloppy U.S. record keeping is compounded by Afghanistan’s indifference to the congressionally mandated U.S. oversight of the weapons’ whereabouts. “When we went there and said, ‘We want to see how the Afghans handle this,’ the Afghans refused to let us in to check the weapons” at one facility in Kabul, Sopko said. U.S. military officials told Sopko’s auditors they’d get them in. “We showed up and guess what — everybody was attending a funeral,” Sopko said. “We could not get in. When our guys tried to take pictures, all of a sudden, whoa, the Afghans kicked us out — and our U.S. military couldn’t get us in.”

The problem of untracked weapons, according to excerpts from the 28-page report, is likely to get worse:

Part of the accountability problem, the report notes, stems from imposing rules that require schooling in a country without much of it. “Efforts to develop the capabilities of Afghan National Security Forces personnel to manage the central depots,” it says, “have been hindered by the lack of basic education or skills among ANSF personnel.” 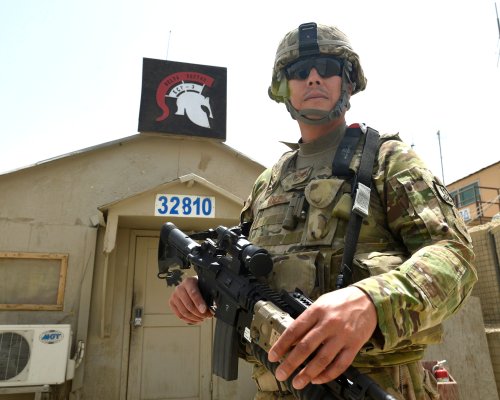 Quadruple Threat: Soldier, Sailor, Airman and Marine, All Rolled Into One
Next Up: Editor's Pick