The most often-recited chapter of the Qur’an by the Muslim faithful is first chapter appropriately named “The Opening” (Al-Fatihah in Arabic). It is recited at least 17 times a day just through the five daily ritual prayers. And, The Opening is recited often at the beginning and end of religious gatherings, weddings, funerals, and other important life events. The chapter consists of 7 lines that offer the pre-text to the rest of the Qur’an. Commentators have pointed to The Opening as a summary of the entire Qur’an. In the Islamic tradition this chapter is known as “Mother of the Book” (Umm ul-Kitab) because of its stature in the Qur’an and in the life of devout Muslims.

Since this is my last post for the 30 days, 30 reflections of Ramadan series, I thought it appropriate to offer some insight into this commemorative chapter of the Qur’an — hoping that the end is just the beginning of many conversations and openings. These insights are just a glimpse into the extraordinary commentary that exists in the Islamic tradition on The Opening.

The Opening begins with what becomes the opening phrase of all of the 114 chapters of the Qur’an [except chapter 9 since it is a continuation of chapter 8]: “In the name of Allah, The most gracious, The dispenser of grace” (1:1). Alternatively, you will often find this phrase being translated simply as “…The most merciful, The most compassionate.”

The Opening begins by introducing the author. God is introduced as Allah, which is the Arabic word for God. Allah is a unique name that by its linguistic nature cannot be gendered (unlike goddess) and cannot be pluralized (unlike gods). Allah is the name for God that unites all divine names and attributes into One unlike other names and attributes that point to an aspect of God. To clarify, Allah is not “the Muslim God.” Allah is described in the Qur’an as the creator and sustainer of the heavens and the earth and everything that exists in between — the God of every living reality. As such, when the Torah or Gospel is translated into Arabic, God or its equivalent from another language is translated as “Allah.”

Then, God’s chief attributes are introduced — The most gracious, The dispenser of grace. Both attributes (Al-Rahman and Al-Raheem) share the same linguistic root — R-H-M. The root word in Arabic means “womb.” So, the attributes are really expressing the mother-like mercy and compassion that God has for the creation. Interestingly, the Prophet Muhammad would often teach people about God using mother-like metaphors. Once the Prophet saw a woman endearingly holding her child and told his companions that God is more merciful to the creation than this woman is toward her child. Mercy or Grace is really seen, in Islamic theology, as the basis for all of God’s work in the universe. And, the devotees of God are those who adorn themselves with this characteristic such that they should strive to become “Servants of The most merciful” (Qur’an 25:63 — 76).

The next line reads, “All praise is due to God alone, the Sustainer of all the worlds” (1:2). Here the creations relationship to God is introduced and another essential attribute of the divine is revealed. The Qur’anic logic is based on the premise that if God is One, The merciful, The compassionate — then all praise or thanks that comes from the creation should properly be directed toward God. The second part — “the Sustainer of the worlds” — reveals this understanding of God as being the originator and nurturer of everything living thing that exists, the One who takes every living being from its immature and weakest form to its mature and strongest form.

The chief attributes of The most gracious, The dispenser of grace are reaffirmed in the third line of The Opening (1:3).

Then, in the fourth line, another of God’s attributes is revealed and an important theme of the Qur’an is mentioned for the first time: “Master [or Owner] of the Day of Judgement” (1:4). The idea of human accountability of the beliefs held and of the lives lived by human beings is one of the most central teachings of the Qur’an. It assumes a life of the soul that continues well after death. Death is not the end of the soul’s journey; death is what marks the next phase of the soul’s journey — just as when the baby is expelled from his or her mother’s womb to come into the life of this world, death expels the soul from the womb of this world into the next. And, ultimately, every human soul will be asked about how they used the gift of free will in this world. And, God is the Master or Owner of that Day [which really means period of time] in which souls will either be forgiven or taken to task. Interestingly, the word for judgement is related to the word for debt in Arabic. As such, some of the commentators say that this is the “Day in which debts are due” — meaning the debt of life and its blessings. And, since God is the Master or Owner of these debts, God can just as easily and justifiably forgive as God can take to task.

The relationship between the human being and God is really crystallized in the next line: “You alone do we serve, and You alone do we turn to for help” (1:5). Having established our complete dependency, in reality, on God in the previous lines — the central Qur’anic theme of servanthood to and trust in God is introduced. Servanthood does not simply require the life of prayer and ritual devotion — though important. Rather, serving God is about living life in the most beautiful and ethical way in accordance with the teachings of God and in accordance with the divine attributes that the servant seeks to acquire as part of his or her own character. Relying on the help and assistance of God is a natural state of servanthood and it is a profound affirmation of God’s power and majesty.

In the next line, The Opening turns into a prayer and the recitation reaches its climax: “Guide us the straight path” (1:6). This asking of God to be guided is an acknowledgement that God plays an active role in the seeker and servant’s life. God is not aloof nor has God abandoned creation after creating it. Rather, God guides through scripture and prophets and sages. And, God guides every heart that is humble enough to ask for guidance. Interestingly, the next chapter of the Qur’an begins, “This is the Book wherein there is no doubt, a guide for those who are mindful of God” (2:2). In essence, indicating that the rest of the Qur’an is an answer to the devotee’s asking God for guidance.

Finally, the very last line offers a peek into what this guidance is: “The path of those upon whom You have bestowed Your blessings, not of those who have been condemned nor of those who go astray” (7:7). Much of the Qur’an is recounting of stories of people and communities from the past who received God’s good graces. The Qur’an also offers prescriptions and proscriptions to achieve spiritual and ethical success. And, much of the Qur’an is also a relaying of past peoples who transgressed the boundaries set by God and who worshipped other than God — all as a way of warning and redirecting readers and believers to a life of devotion to what is good and right and to an absolute and pure monotheism in which nothing and no one is taken as a god besides God.

This is a brief insight into The Opening and into the major themes of the Qur’an. Ramadan, which will end on Sunday at Sunset, comes every year to remind Muslims of the gift and responsibility of the Qur’an. It is my deepest prayer that more contemplation of the Qur’an will lead to greater openings in the mind and heart that manifest in the world as new rays of light in the midst of darkness. 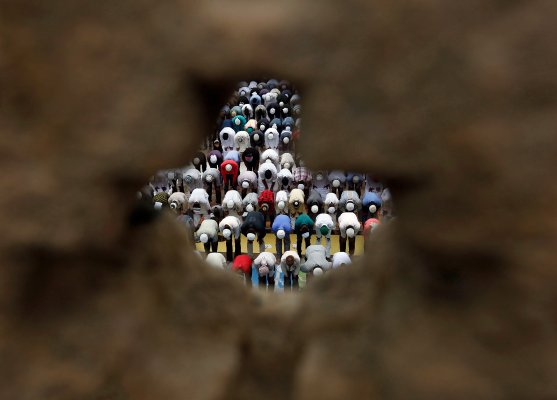 Ramadan, Day 29: Death and Dying
Next Up: Editor's Pick