Obama: Migrant Children Without Humanitarian Claims Will Be Sent Back

President Barack Obama took a tough line on the thousands of unaccompanied migrant children who have crossed the nation’s southern border in recent months, saying those without humanitarian claims will be subject to return to their home countries eventually.

Meeting with the leaders of El Salvador, Guatemala, and Honduras, Obama continued his efforts to dissuade parents from sending their children on the often dangerous journey to the United States. “Children who do not have proper claims,” Obama said, “will at some point be subject to repatriation to their home countries.”

But Obama did preview what the administration is calling a “pilot program” that he is considering in Honduras to allow those with refugee claims to make them from that country without physically making the journey to the United States.

“Typically refugee status is not granted just on economic need or because a family lives in a bad neighborhood or poverty,” Obama said. “It’s typically defined fairly narrowly.”

“There may be some narrow circumstances in which there is humanitarian or refugee status that a family might be eligible for,” he added. “If that were the case it would be better for them to apply in-country rather than take a very dangerous journey up to Texas to make those same claims. But I think it’s important to recognize that that would not necessarily accommodate a large number of additional migrants.”

Obama said such a system would keep smugglers from profiting off families seeking better lives for their children, and “makes this underground migration system less necessary.”

Earlier this month Homeland Security Secretary Jeh Johnson estimated that up to 90,000 migrant children will attempt to cross into the U.S. during the fiscal year ending this September. 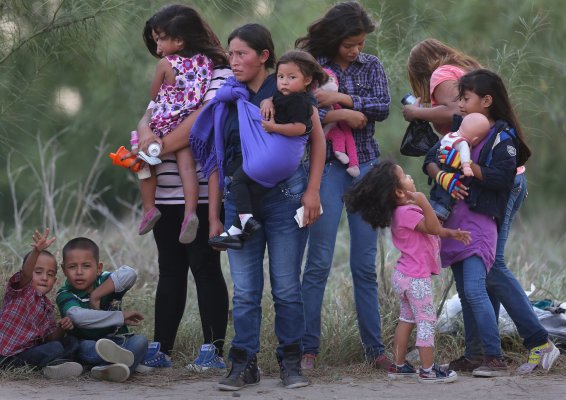 Migrant Girls Share Haunting Stories About Why They Fled
Next Up: Editor's Pick