These Are Twitter's Biggest Secrets

The exterior of the Twitter headquarters on February 5, 2014 in San Francisco, California.
Justin Sullivan—Getty Images
By Kevan Lee

When I choose someone new to follow, when I compose a new tweet, when I share and favorite an update, I seldom think about the why. My following sessions would probably seem haphazard to an outsider, and my favoriting technique comes and goes from one strategy to another.

Even so, the way I use Twitter is far less random than I thought. There is science and psychology behind the way we all tweet.

Researchers have discovered trends in the way that we perform every major action on Twitter—favoriting, updating, sharing, and following. And there’s even an interesting bit of psychology behind what makes Twitter so attractive in the first place. Here’s a look at the psychology of Twitter: what makes us follow, favorite, share and keep coming back for more.

Why we love Twitter so much: Rats, levers and psychology

I’ve hit more than my fair share of Twitter wormholes—minutes that turn to hours as I find more and more tweets to read and share. Does that sound familiar to you, too?

I figured there was a psychological reason behind the draw of Twitter. After digging around, sure enough, I came across a perfect explanation of this phenomenon, courtesy of Dr. Marion Underwood, a clinical psychologist at the University of Texas at Dallas.

This hit home for me. Twitter offers these intermittent rewards that keep us coming back. Maybe you’ll check Twitter once and have a notification that someone retweeted you. That’s enough to keep you coming back a handful more times, even if nothing new and rewarding has occurred. We keep pushing the lever, hoping for something great.

The concept makes complete sense for those who wind up checking Twitter multiple times each day (same goes for email, too).

And just as there is psychology behind why we love Twitter so much, there’s science and data behind the many different ways we interact with one another. Here are three of the most interesting studies I’ve come across.

Why we follow: The 15 factors that affect follower growth

What spurs us to follow someone on Twitter? Researchers at Georgia Tech and Michigan combined to study the factors involved in following.

Their study looked at more than 500 Twitter users and a half-million of their tweets and analyzed follower count over a 15-month period—one of the longest timeframes you’ll see in a Twitter study.

The research team worked from a basis of follower growth factors that were made up of variables from social science, linguistics, computer-mediated communication, and network theory. In other words, if there is any reason why someone would follow someone else on Twitter, this study accounted for it.

The factors they came up with boiled down to three categories: social behaviors, message content, and social network structure. Here are the individual factors for each, starting with social behaviors:

Knowing what’s behind each of these factors, how would you rate them in terms of importance? Which factor helps gain the most followers?

The winner is network overlap.

In the chart above, you’ll see that the effect on follower growth spills to both sides of the x-axis. So not only can you see that network overlap, retweetable content, and a good bio have positive effects on gaining followers, you might also notice that broadcast communication (e.g. tweets with no @-mention), negativity, and hashtags drive follower growth down.

Takeaway: The PsyBlog has a nice recap of the findings from this study, summarizing points of emphasis from the research data. If you want to grow your followers, try these tips:

I’m sure we’d all love to know what makes for a perfect tweet. Cornell researchers were interested, too.

They conducted a study that examined more than 1.7 million tweet pairs, comparing the differences in language between the two tweets and assigning value based on which style of tweet gains more retweets. Their conclusion:

If you were looking for an exact formula of a perfect tweet, the researchers didn’t find one. They did, however, offer a large number of best practices to go along with their conclusion above.

Perhaps best of all, the research team put together a tool based on their findings that can help you perfect your posts. Enter two similar tweets into the Retweeted More tool, and you’ll get an algorithmic answer about which is better.

(Ready for some practice? See how you fare against the algorithm by taking this25-question test–see if you can pick the tweets that got shared more.)

Takeaway: Take inspiration from headlines and from your past successful tweets (your Buffer analytics can help with this) to write a tweet that is optimized for sharing. Try out the Retweeted More tool to test different versions.

(If you’re curious what we’ve found works best for retweets, check out the recap from our Twitter webinar.)

Why we favorite: Reaction & function

A study published by the Association for the Advancement of Artificial Intelligence sought to put our myriad favoriting methods into categories. They quizzed a group of more than 600 Twitter users by asking two questions:

They received more than 331 answers to these questions and placed each answer into one or more categories. Here’s the full taxonomy of categories they used to classify favorites.

What’s interesting about the way these 331 answers fell is that there came about two distinct use cases for favorites. The research found that people favorite a tweet for one of two reasons:

(If you’ve ever favorited something you agree with, your favorite would fall into the function/purpose category. According to the study’s authors, favoriting as agreeing is intended for the author; liking for the person doing the favoriting.)

Takeaway: Classifying favorites is nothing new; we all seem to have a method of favoriting tweets. The research shows, at least, that our method isn’t necessarily unique to us. For every user who favorites their friends, there’s a user who’s favoriting for bookmarks.

Do these insights ring true to you?

Psychology shows us how Twitter can be so addicting: We crave a great experience each time we pull the Twitter lever, and it keeps us coming back for more.

Research and data reveal a bit into the way that we use Twitter. We follow based on our network, we retweet based on tried-and-true formulas, and we favorite for reaction or function.

Kevan is a content crafter at Buffer, the super simple social media management tool. His social media and productivity tips have appeared in Fast Company and Lifehacker, and he’s always on the lookout for a good headline pun. Connect with him on Twitter .

Correction: The original version of this story incorrectly identified the university where Marion Underwood teaches. She is a member of the faculty at the University of Texas at Dallas. 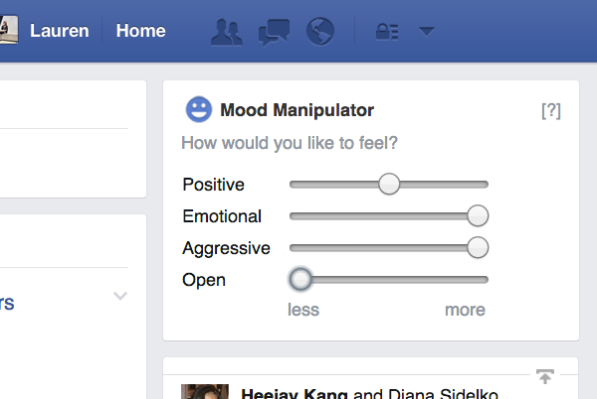 Manipulate Your Own Mood, Before Facebook Does
Next Up: Editor's Pick