Smoke rises from a building following the Israeli attacks in Gaza City on July 25, 2014.
Anadolu Agency—Getty Images
By Steven Stotsky

An informational battle of competing messages directed at international audiences parallels the military fighting between Israel and Hamas. Accompanying a barrage of wrenching images are Palestinian fatality statistics alleging disproportionate numbers of non-combatants. These figures are crucial because they form the basis of accusations that Israel uses excessive and indiscriminate force.

Hamas, the terrorist group controlling Gaza, endeavors to turn Israel’s military superiority to its own advantage by portraying the Israeli response to intense rocket and mortar fire as disproportionate and indiscriminate. In doing so, it hopes to turn public opinion against the Jewish state, as well as bolster its own standing at the expense of the Fatah-led Palestinian National Authority in the West Bank.

Fatality figures provided by Hamas and other groups should be viewed with suspicion. Not only do Israeli figures cast doubt on claims that the vast majority of fatalities are non-combatants, but a careful review of Palestinian sources also raises doubts.

Analyses of the casualties listed in the daily reports published by the Palestinian Center for Human Rights, a Gaza-based organization operating under Hamas rule, indicate that young males ages 17 to 30 make up a large portion of the fatalities, and a particularly noticeable spike occurs between males ages 21 to 27, a pattern consistent with the age distribution typically found among combatants and military conscripts. Palestinian sources attempt to conceal this discrepancy with their public message by labeling most of these young men as civilians. Only a minority is identified as members of armed groups. As a result, the PCHR calculates civilian fatalities at 82% as of July 26. PCHR provides the most detailed casualty reports of the various Palestinian agencies from Gaza that provide figures to the media and to international organizations like the UN. Its figures closely match those of the Hamas-run Gazan Health Ministry and other groups.

We have seen this before. A similar dispute over casualty figures occurred during Israel’s “Operation Cast Lead” in the Gaza Strip in January 2009. The Israelis contended that the majority of the fatalities were combatants; the Palestinians claimed they were civilians. The media and international organizations tended to side with the Palestinians. The UN’s own investigatory commission headed by Richard Goldstone, which produced the Goldstone Report, cited PCHR’s figures along with other Palestinian groups providing similar figures. Over a year later, after the news media had moved on, Hamas Interior Minister Fathi Hammad enumerated Hamas fatalities at 600 to 700, a figure close to the Israeli estimate of 709 and about three times higher than the figure of 236 combatants provided by PCHR in 2009 and cited in the Goldstone Report. Initially, playing to the international audience, it was important for Hamas to reinforce the image of Israel’s military action as indiscriminate and disproportionate by emphasizing the high number of civilians and low number of Hamas combatants among the fatalities. However, later on, Hamas had to deal with the flip side of the issue: that Hamas’s own constituency, the Gazan population, felt they had been abandoned by the Hamas government, which had made no effort to shelter them.

Scrutiny of Palestinian figures in the current conflict reveals a spike in fatalities among males ages 21 to 27 and an over-representation from ages 17 to 30. Data gleaned from the daily reports of the PCHR show that from July 8, the start of Israel’s “Operation Protective Edge,” through July 26, 404 out of 915 fatalities tallied from daily reports in which the ages were identified occurred among males ages 17 to 30, comprising 44% of all fatalities among a group representing about 10% of Gazans.

Expanding the age range from 17 to 39 and including those identified as combatants whose ages were not given increases that number to 551 fatalities, or 57% of all fatalities, even though this group represents less than one-sixth of Gazans. By contrast, adult female fatalities were less than 10% of total fatalities for a group that comprises a quarter of the total population.

Children, here defined as those under age 17, represented 194 of fatalities, 20% of the total. Any child fatality is a tragedy, but it is important to note that children make up over half the population of Gaza.

Despite the discrepancies noted, the substantial number of civilian fatalities leaves room for further scrutiny. In seeking an alternate explanation for the excess of young male fatalities, it might be posited that this reflects some behavioral feature of this group separate from combat-related activities. However, the shape of the fatality demographic makes this unlikely. What feature would explain the sharp increase from age 17, peaking at ages 22 to 25 and then declining rapidly after age 30?

A more plausible explanation is that the age demographic of the fatalities reflects the relative involvement of different age bands in hostilities. Of course, some of those in the most represented age-bands aren’t combatants. However, balancing that, Palestinian and Israeli sources confirm that a portion of the fatalities over age 40 were senior Hamas or Islamic Jihad operatives targeted by Israel.

Furthermore, this overall breakdown of the number of fatalities doesn’t address important issues like the portion of female and children casualties who were family members of targeted combatants who failed to heed Israeli evacuation warnings or were perhaps intimidated into remaining as “human shields.”

The demographic analysis of the fatalities in the Gaza conflict has limitations. It can’t identify who is or isn’t a combatant. But the spike in fatalities among males starting in their late teens and peaking in their early to mid-twenties, and the divergence of the pattern of fatalities from the demographic pattern of the population, raises considerable doubt about claims that as many as 75% or more of the fatalities are non-combatants. In light of evidence—provided by groups that monitor Arabic language media (like the Middle East Media Research Institute)—that Hamas has instructed Gazans to describe anyone killed as a civilian, journalists have a responsibility to convey this uncertainty to their audiences and not present figures provided by Hamas and Hamas-affiliated sources as unqualified fact.

Steven Stotsky is a senior analyst with The Committee for Accuracy in Middle East Reporting in America (CAMERA), a U.S.-based group that monitors the news media for what it considers to be anti-Israel bias. 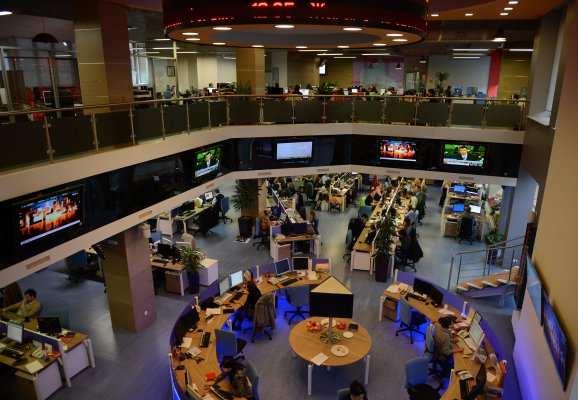 Why the Broadcasting Board of Governors Is Nothing Like RT
Next Up: Editor's Pick