Scarlett Johansson, Lucy and the Future of the Female Action Star

This weekend’s Lucy—the action thriller starring Scarlett Johansson as a woman who has 10 times the brain capacity of other humans—may just turn out to be a hit. The film scored $2.7 million at the Thursday box office, beating out Hercules, which stars a traditionally macho hero, Dwayne “The Rock” Johnson. If the box office numbers continue to soar, Johansson will join the small pantheon of women who can carry an action film that isn’t based on a comic book or a young adult novel.

There are very few actresses who can accomplish that feat. Remember, we’re not counting Jennifer Lawrence (The Hunger Games is based on the uber-popular YA series), Kate Beckinsale (the Underworld series was based on a comic), anyone who shared the screen with an equally formidable male action hero (Linda Hamilton in Terminator 2) or who starred in an action film that bombed (Jennifer Garner in Elektra). Who’s left? Angelina Jolie is probably the most well-known: she took top billing in Tomb Raider, Salt and Wanted (to varying degrees of success). Uma Thurman kicked ass in both Kill Bill movies. And Sigourney Weaver was a terrific warrior in Alien. That’s about it.

And none of those women starred in a tentpole superhero film. In fact, films focused on superheroines have historically crashed and burned (see: Halle Berry in Catwoman). But being able to carry an action film with no built-in fan base means that the people at Disney may finally feel comfortable with giving Johansson her own Black Widow film, where she plays the star, not the sidekick to Robert Downey Jr. as she does in The Avengers.

But there’s a hitch. Lucy isn’t really an action movie. It’s more a meditation on pseudo-science: action scenes are intercut with clips of animals from nature documentaries and shots of stars swirling through space. Lucy never shoots or kicks when she can just sweep bad guys out of the way with the flick of her hand. Her Marvel movies have certainly proven that she has the physicality necessary for a superhero film. But does she want her own franchise? Her resume suggests perhaps not.

Johansson has taken a strange trajectory to this spot. Her breakout roles had her playing the other woman or the unfaithful woman (even if the cheating is simply emotional): Lost In Translation, Girl with a Pearl Earring, Match Point, The Other Boleyn Girl, Vicky Cristina Barcelona and He’s Just Not That Into You all place Johansson in some sort of love triangle or cheating scandal. Why she was cast in these roles is obvious: Johansson is a classically beautiful, voluptuous blonde. Men in the audience knew she was fatally attractive, and women—based on the number of times I’ve heard female friends declare their hatred for her—were repulsed by her undeniable sex appeal.

You may notice that these more recent films increasingly capitalize on Johansson’s intelligence and not just her body: she’s played and tricky alien, a computer, and now in Lucy, the smartest woman in the world. So while the success of Lucy may mean that Johansson can helm a Black Widow movie, taking such a simplistic roles could feel a step down for Johansson. She’s made a point throughout her career to choose pretty complex roles, working with directors like Woody Allen and Christopher Nolan and opting for lower-budget projects like Don Jon and Under Her Skin, when she could turn on her charm and have an easy road to rom-con stardom. Why go from playing hyper-smart women in artier films to reciting cliche dialogue in a superhero flick?

But the way actors afford to take “challenging” roles like Samantha in Her is by suiting up for things like The Avengers. So I suspect it will only be a few more years before we see Scarlett Johansson heads up her own Marvel franchise. Hopefully more women will follow. 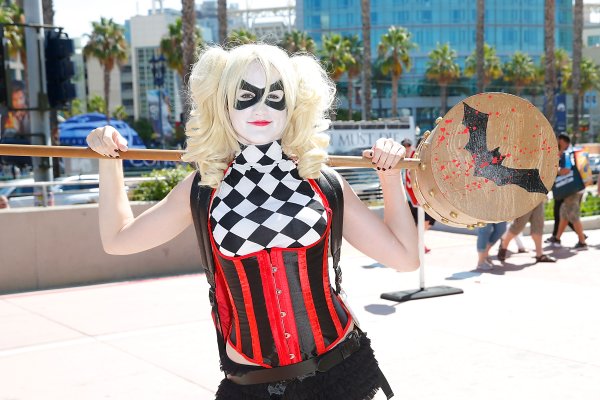 The Rise of Fangirls at Comic-Con
Next Up: Editor's Pick