Seattle’s iconic Space Needle looks to be completely undamaged after a small, white quadcopter drone operated by an Amazon employee may have crashed into an observation deck window Tuesday evening, police say.

Witnesses reported seeing an unmanned aerial vehicle buzzing around the Space Needle before “possibly” colliding with the structure, then zipping over to a nearby hotel room, they told police. The Seattle Police Department then contacted the resident of the room, who admitted to piloting the drone but said he merely approached, and did not collide with, the Space Needle.

The Amazon employee showed the police video of his drone flight, none of which suggested the drone actually hit the building. The video has been taken down from YouTube, but a few Vines posted by BuzzFeed have survived:

Commercial use of drones is generally prohibited in the United States while the Federal Aviation Administration works out how to integrate them into the national airspace. Flying drones recreationally, however, is allowed, though certain FAA rules and local laws apply. FAA guidance, for example, says recreational pilots should keep their aircraft below 400 feet above ground level and away from populated areas.

The Space Needle incident does not appear to have had anything to do with Amazon’s in-development drone delivery program. 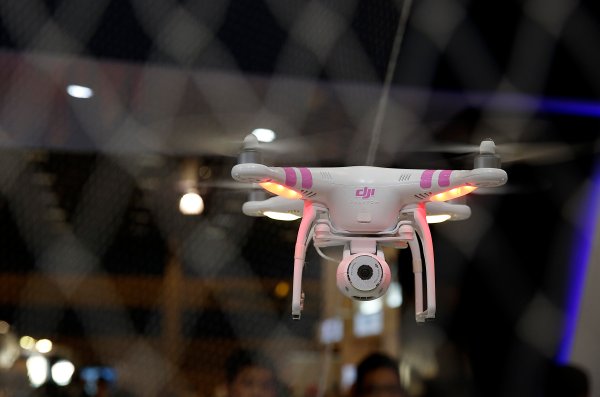 Here's Why So Many Drone Pilots Are Getting in Trouble
Next Up: Editor's Pick