Hamas Still Has Some Friends Left

With the fighting in Gaza intensifying daily, the ruling militant group Hamas is finding itself pushed to the limit. Trying to match Israel’s vast military might is an impossible task, and even finding the resources to launch rocket attacks against Israeli targets could only be achieved by heavy foreign investment.

But which country wants to invest in Hamas? The West certainly doesn’t. The militant Palestinian organization has been a firm fixture on the United States’ Foreign Terrorist Organizations list since 1997. Hamas’ only hope is its neighbors in the Arab world.

Hamas has two clear allies, according to Middle East experts: Qatar and Turkey. Both have given Hamas their public support and financial assistance estimated to be in the hundreds of millions of dollars.

Turkey’s ruling Justice and Development Party, which came to power in 2002, supports what Joshi calls “other neo-Islamist allies.” Though the Turkish government explicitly rejects the label “Islamist”, their social conservatism is inspired by an Islamic ideology that Hamas shares. Last year, Meshaal visited Turkey and met with Turkish Prime Minister Recep Tayyip Erdogan for several hours.

Both Qatar — one of the world’s richest states — and Turkey are powerful allies to have, but Hamas might wish for more support given the breadth of the Arab world. It once had it, too. Hamas used to be strongly allied with both Iran and Syria, with the former giving Hamas an estimated $13-15 million a month as recently as 2011, as well as long-range missiles. Hamas’ political bureau used to be based in the Syrian capital of Damascus before its move to Qatar in 2012.

But relations cooled dramatically with Iran and Syria amid sectarian divisions following the outbreak of the Syrian civil war. Iran, a Shia-majority country, backed the government of Syrian President Bashar al-Assad whose Alawite faith is a branch of Shia Islam. Hezbollah, a powerful Shia Islamist group based in Lebanon, also took Assad’s side.

However Hamas, a Sunni-led faction, sided, as most of the Arab world did, with the rebels. Cue Tehran cutting their allowance, Hezbollah allegedly ordering Hamas members out of Lebanon, and Hamas packing their bags for Qatar.

“Iran’s relationship with Hamas was always problematic,” says Chris Doyle, director of the Council for the Advancement of Arab-British Understanding. “Hamas is a Palestinian Sunni group and Iran is Shia. Nevertheless, Hamas was their entry into the issue of Palestine.”

Seeking to regain its influence over this issue, Iran has attempted to foster a reconciliation with Hamas over the last 18 months. Farwaz Gerges, professor on the Middle East at the London School of Economics says the conflict in Gaza is the reason. “The current crisis has brought a kind of rapprochement between Iranian leaders and Hamas.”

Hezbollah too, Gerges notes, has invited Hamas back into the fold. On Monday, the Hezbollah-owned television channel Al Manar reported that Hezbollah leader, Hassan Nasrallah, praised Meshaal for “the persistence of the Hamas resistance.” The TV station added he “strongly supported their rightful demands to end the current battle.”

Gerges is quick to point out that this doesn’t signal “a return to the warm days of the Iran, Hezbollah and Hamas leaders.” However he adds: “Out of this particular crisis, a new realignment might happen.” That may sound like good news for Hamas, but there’s another Arab country that is of late vehemently opposed to it. That would be Egypt, the largest and most influential country in the Arab world and the one responsible for drafting a potential cease-fire.

From 2012 to 2013, Hamas enjoyed Egypt’s munificence under the leadership of former President Mohamed Morsi, a longtime member of the Islamist Muslim Brotherhood of which Hamas is an offshoot. When Morsi was ousted last year and replaced with Abdul Fattah al-Sisi, Hamas knew the good times were over.

“The most devastating thing that has happened to Hamas is the ousting of Mohamed Morsi,” comments Gerges. Sisi, whose government has orchestrated a violent crackdown on the Muslim Brotherhood, destroyed Hamas’ tunnel network into Egypt and closed the border crossing at Rafah, devastating Hamas’ finances. The United Arab Emirates and Saudi Arabia, two of Egypt’s financial backers, are also hostile to Hamas. Like Egypt, they view the Muslim Brotherhood as a clear domestic threat — and Hamas is guilty by association.

But perhaps Hamas doesn’t need Egypt. As the death toll continues to rise in Gaza, there is a groundswell of public sympathy across the Arab world for the group.

“Hamas in terms of people on the street is at the height of its political power in every single Arab country with the exception of Egypt,” says Gerges. “The longer the conflict continues, the more they gain in popularity. And for Hamas, what really matters is the public pulse.” 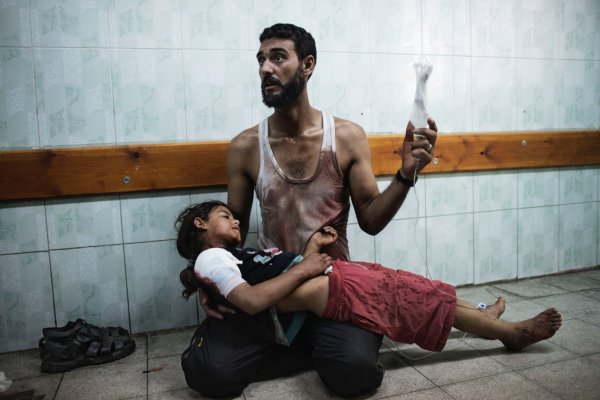