Equity markets have been extremely strong in the past few years. Most of America’s largest companies have managed to increase revenue, profitability, and shareholder distributions, sending their share prices to record highs. A few companies, on the other hand, haven’t achieved the same growth levels. In fact, over the past 10 years, some S&P 500-listed companies have consistently shrunk.

Economic headwinds hurt the sales of some companies. Other companies shrunk because they spun off or divested business segments. Based on 24/7 Wall St.’s review of S&P 500 companies, these are America’s 10 great shrinking companies.

After being hurt by the recession, several industries have been thriving in recent years. Notably, while GM and Chrysler needed a government-financed bailout to survive the recession, eventually America’s automotive sector recovered as car and light truck sales have rebounded. By contrast, U.S. homebuilders have struggled to boost sales in the wake of the recovery, as new housing starts remain well below historical levels. Two of the companies with the largest declines in sales during the last 10 years are home builders PulteGroup and Lennar.

While economic reasons were behind several large long-term revenue drops, divestitures were the primary cause of the declines in most of the other companies. These activities have been especially common in the oil and gas sector. Marathon Oil, Williams, and ConocoPhillips each spun off units into new, separately-run companies.

In other instances, the companies that reported large drops in revenue were conglomerates that elected to break up their empires. For instance, once-troubled Tyco International split itself into three businesses in 2007. What remained of Tyco was again split three ways in 2011. Altria Group, too, spun off its brewing operations, its international cigarette operations, as well as Kraft Foods in the 2000s.

In other instances, America’s fastest shrinking companies divested operations that simply did not fit into their businesses. H&R Block sold its financial advisory and mortgage servicing units to focus further on its bread-and-butter tax advisory business. In another notable instance, Pepco sold its power plant unit in order to shed exposure to commodity fluctuations.

A shrinking business may, in fact, often serve as a blessing in disguise to shareholders. Motorola split itself into two companies in 2011, Motorola Solutions and Motorola Mobility. The latter, which sold Motorola phones and other home products, has struggled substantially since the split. While shareholders cashed out in a sale to Google, the business has continued to struggle. Meanwhile, Motorola Solutions, the shares of which have performed well without Motorola Mobility weighing them down, has decided to spin off yet another business and shrink further.

In order to identify America’s fastest shrinking companies, 24/7 Wall St. reviewed the S&P 500 companies that had the largest revenue declines over their last 10 full fiscal years. We excluded companies that filed for bankruptcy or are no longer in the S&P 500. Sources included the Securities and Exchange Commission, S&P Capital IQ, and Morningstar.

Perhaps no company has evolved as much as Altria Inc. (NYSE:MO) has in recent years. Beginning in 2002, Altria, then called Philip Morris, spun off much of its stake in the Miller Brewing Company, which is now part of SABMiller. While Altria still held a 26.8% stake in SABMiller at the end of last year, it no longer records sales of beer as part of its revenue. Altria’s spinoffs continued as the decade progressed. In 2007, Altria spun off Kraft Foods, which itself split into two companies in 2012. The year after selling Kraft, Altria shrank again, this time spinning off its international cigarette operations into a separate publicly-traded company, Philip Morris International (NYSE: PMI). In addition to the spinoffs, revenue from smokeable products has been relatively flat in recen

Scandal rocked conglomerate Tyco in the early 2000s, leading to the convictions of CEO Dennis Kozlowski and CFO Mark Swartz in 2005 for stealing money from the company. In the years that followed, Tyco has split up its business several times. In July 2007, the company spun off its healthcare and electronics businesses into two new companies, Covidien and Tyco Electronics — now called TE Connectivity. In September 2011, the company announced a further split, this time spinning off its ADT home security and its flow-control, or valve making, businesses. Currently, Tyco International Ltd. (NYSE: TYC) provides security and fire safety products and services, including alarms and sprinklers, to homes and businesses. While Tyco’s revenue declined by 69% between its 2003 and 2013 fiscal years, former CEO Ed Breen has been praised for his work in turning around the company.

MORE: The 15 Highest-Paying Companies in America

While Motorola has been lost sales over the past decade, much of this decline came when it split its operations into two separate businesses in 2011. The company’s phone and consumer products businesses was named Motorola Mobility, while Motorola, Inc., which focused on providing communications equipment and services to businesses and governments, changed its name to Motorola Solutions. Google acquired Motorola Mobility that same year for $12.5 billion, but sold it earlier this year to Lenovo. Without the struggling home products and mobile devices businesses, Motorola Solutions has experienced solid earnings growth. Motorola Solutions Inc. (NYSE:MSI) is likely not done shrinking. In April, the company announced it would sell its enterprise solutions business, which accounted for about $2.7 billion, or roughly 36%, of Motorola’s $8.7 billion in sales in 2013, in order to concentrate on its government services business.

Texas exploration and production giant Marathon Oil’s revenue dropped from $36.7 billion in 2003 to $14.6 billion last year. In between, revenue hit a high of more than $77 billion in 2008 as oil prices soared. Of this, $12 billion came from exploration and production, while more than $64 billion came from refining, marketing and transportation. In 2011, Marathon Oil Corp. (NYSE: MRO) spun out its downstream refining, market and transportation business, now called Marathon Petroleum Corporation, into its own public company. The spinoff resulted in the loss of the bulk of Marathon Oil’s revenue. The newly spun off Marathon Petroleum reported revenue of nearly $94 billion in 2013. By contrast, Marathon Oil reported less than $15 billion in revenue.

For the rest of the list, please visit 24/7 Wall Street. 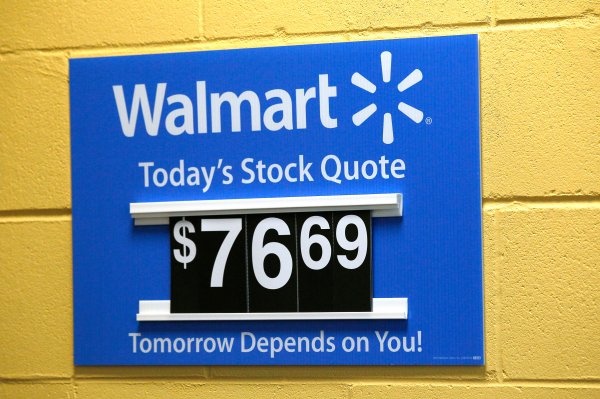 Walmart's Head of U.S. Operations Will Step Down After Slump in Sales
Next Up: Editor's Pick