deadmau5 Sounds Off on DJs, Antagonizing Everyone and His Label: Q&A

deadmau5 is a busy man. Joel Zimmerman, the Canadian electronic music producer known best by his stage name, not only just released his first double album, while(1<2), but also just finished competing in the Gumball 3000 rally, a Cannonball Run-style race that runs from Miami to Ibiza. While Zimmerman’s race in his Nyancat-decorated Ferrari was cut short due to a license suspension in France, his album was racing to the top of the dance charts, debuting at #1 on the iTunes chart and #4 on Billboard.

while(1<2) shows deadmau5 at this best — pairing unforgettable beats and hooks with sparse, film score-esque soundscapes and pushing the boundaries of the electronic and dance music form into minimalist atmospherics. The album is his first on Astralwerks and clocks in at a whopping 25 tracks, including remixes of two Trent Reznor songs, “Ice Age” by How To Destroy Angels and “Survivalism” by Nine Inch Nails.

TIME talked to the producer over IM about making music, picking fights and racing his so-called “Purrari”:

TIME: Do you still enjoy strapping on your mau5 head?

You just released a new track called Carbon Cookie. Can you tell me about that?

I had 30 minutes to kill. Not sure what I was doing, I think I was starting some track for half a second there and then facepalmed…. and just went with it. They usually end up in the recycling bin to be honest, I just figured whatever, but surprisingly enough, there was a melody in there that I’m throwing onto another track… so it wasn’t a total loss.

Were you trying to make a comment about EDM or just having fun?

A bit of both, I guess. They go hand in hand for me, but it’s hard to comment on anything “EDM” and not have a laugh.

What would you call electronic dance music?

Well, EDM used to be the broad term for it, I thought…. but I don’t know. I rarely follow the s–t as it as. I only really get a good taste of it when you gotta, like, do those festival gigs, and you’re playing last, which means more often than not you have to hang around all day and endure what everyone else is doing until your slot. Of course, that doesn’t include everyone, lots of great dudes making great music out there

When you have to “hang around all day and endure,” isn’t that because you’re headlining the festival?

Sometimes yeah, other times, well… catering, a sunny day, and good company always beats hanging out at a hotel.

What do you think is the major difference between the music you create and what other artists on the bill at a festival are doing?

Well, I get stuck in these DJ festivals mostly.

Right, and you’ve pretty firmly stated your aversion to being referred to as a DJ. What do you see as the main difference between what you do and DJs?

The genre, as it were, just seems pretty disposable to me in the sense that, you produce all this music, put 100% of you into your show, and you’re followed up or opening for some guy playing a CD player of some other dude’s s–t. That’s the gist of it.

Your new album is clearly carefully crafted. How long did it take you to make?

About a year or so.

There are 25 tracks on the album, so that seems pretty quick!

There were some projects included in there that I’ve been kicking around for many years, just couldn’t find the right spot for some of it. I think the album was a great time and place for me to showcase some of it.

Well I’ll always have a skewed view on it, just due to my own familiarity with some of the work. I think that’s something every artist views things from time to time. I’d be pretty saddened to hear anyone say “Yeah, listen to this… God I’m awesome, the way this all sits together” about their own work.

Was that intentional or does it just reflect a mindset or mood that ran through its creation?

Nothing really intentional about the overall vibe. I’m pretty emotionally detached from a lot of things. LOL.

Oh really? You just get in the studio and …what?

But what goes into making a song if not emotion?

Just a load of experimentation. I like to think of “the studio” as a laboratory, where I can go in, learn tricks, apply, revise, and release. I’d figure I had about the same emotional attachment to my craft as a guy over at NASA does over… NASA stuff.

How do you know if something is good enough for release? You said earlier that you stick stuff in the recycling bin a lot.

Maybe some here and there, but nothing worth crying over if I ever win a Grammy.

Do you consider yourself an artist or a craftsman or an engineer?

Well, the artistry comes in when you strive to detach from everything else you’ve heard a million times and once that part’s in, the brunt of the work is, what you said, sonic craftmanship and engineering.

How do you detach yourself? Is it something you have to learn?

It’s not something I’d recommend, or even knew how to do — it’s just something I’m naturally good at. I’m pretty sure a good psychologist could figure it out, but I don’t waste much time wondering why I am the way I am. There are some guys out there who make great music who may or may not be super-emotionally attached to their work. To each their own. I know some brilliant “EDM” artists… who can compose some really interesting melodies, but can’t engineer for s—t and vice versa. Its’ a rare gift to have both.

There’s been a lot of talk about artists that you don’t like or respect, so who do you like? What’s on your iPod?

What music were you playing in your car during the Gumball rally?

Everything else was wiped from my iPod. No joke.

Really? That would make me drive extra quickly, just to put a stop to it. Your album has two How To Destroy Angels remixes, how did that come about?

Well, quite simply, I just really enjoy those works…. and sometimes I just wander off whatever I’m doing and re-produce / remix whatever you want to call it just to put a spin on it for my own satisfaction…. basically I just asked for permission to include those works into the album as they fit in nice, and Trent [Reznor] was kind enough to give us the green on it.

Reznor has moved into doing film scores now. Have you considered that career path at all?

Perhaps at one point, but from my understanding, it’s very time consuming!

This was your first album with Astralwerks. Do you feel like it’s a good fit for you there?

This answer is going to suck, because I feel obligated to just say things how they are. I don’t know anyone at Astralwerks. I’m sure they get on great with my manager and team, but I’ve never heard anything from them. I’m sure they do a great job at distribution. So yeah, thanks guys. I’m a little bummed out at their lack of interest in calling me, or emailing me, but that’s every major label. Sucks having to kinda do everything yourself…I’ve always imagined as a kid or whatever, being signed to a major, walking into their office, and having “meetings” and coming up with cool ideas and working on them together. I guess that’s where the importance of self reliability comes into play.

Are you looking for a collaborator? Or have you come to love your independence?

Maybe not musically, but creatively. “Hello, Mr Astral last name Werks, Joel here! How are you? Man, we should have some of my music scored! Let’s book an orchestra and get something done, what a cool project, and then we could press a limited edition set of it and sync out some to film, or just for fans. I actually asked for that about 8 months ago…. still haven’t gotten a response. Not expecting one anymore, so looks like I’ll just have to do this s–t myself.

You run your own record label now, mau5trap. Are you trying to do things differently there?

Well, mau5trap’s a little different. I have a solid team of people who I’ve known and trusted for many many years helping me out with that and they’ve been doing a great job. I chime in with my thoughts from time to time, but for the most part, I’m quite pleased with it.

And one of your new artists, Colleen D’Agostino, contributed vocals to one of your tracks.

Yeah, wouldn’t that have been awesome if Astralwerks procured that for me? Nope, my lawyer did (she’s cool as f–k). I love my lawyer. And I love Colleen. Never met her yet, but she’s got a voice… All natural talent, too. I love the lack of autotune.

You just competed in the Gumball 3000 Rally and drove from Miami To Ibiza. What was the best part of the race?

Winning. There were so many amazing moments, which is what made it so great for me. I cant even count the “omg remember when…” moments.

Would you do it again? Or have you already moved on to the next thing?

I’ve already booked my spot for next year’s run. In like Flynn.

I read that you didn’t get your driver’s license until you were 30, so are you making up for lost time?

Yeah… and today I was whipping around in an indy500 car in Toronto at the Honda Indy earlier today. I love driving. Specifically, I love driving fast. When legally permitted to do so.

What made you finally get your license?

Living in LA. I just moved there. You can’t get anywhere in LA without a car, before I was in downtown Toronto, no need for nothing!

Do you mind having a reputation as an antagonist? Or do you feel that by calling people out you are pushing music further?

Right, but you do it publicly, where as many people do that in their heads.

Yeah, I guess I catch myself thinking — why do I even bother? But then again, what changes either way. Plus, it’s entertaining.

Do you think you would be where you are in your career without social media?

Not today, my friend, not today.

MORE: A DJ School for Babies in Brooklyn 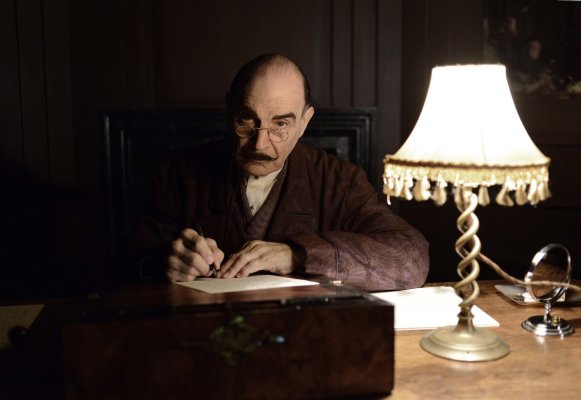 The Same Man Has Played Detective Poirot for 25 Years, But Now He's Out of Mysteries
Next Up: Editor's Pick