The summer of soccer isn’t over yet. Following in the footsteps of nearly rabid fan interest in the United States Men’s National Team during the World Cup, and record numbers of American viewers for the tournament, some of Europe’s best teams have landed here in search of pre-season competition — and pre-season earnings on ticket and merchandise sales.

Manchester United is one of eight teams that will contest the Guinness International Champions Cup against the likes of Inter Milan, A.C. Milan, AS Roma, Real Madrid, Liverpool, Manchester City and Olympiacos. The tournament features a tasty matchup between Man U and Real Madrid on August 2 at Michigan Stadium in Ann Arbor, Michigan — a.k.a. “The Big House” – that will break the U.S. attendance record for a soccer match in the U.S., given that all 109,901 seats have already been sold. Matches will also take place in Denver, Pittsburgh, Chicago, Toronto, Los Angeles and New York City, among other cities. The championship games will be played in Miami on August 4.

United warmed up for the tournament by tearing apart Major League Soccer’s LA Galaxy, 7-0, in a friendly at the Rose Bowl Stadium before a crowd of 86,432. This was not a trip that Man U’s new coach Louis van Gaal, even wanted to make. “But the tour was already arranged, so I have to adapt, I shall adapt,” he said. Better get used to it, Louie. Man U’s American owners, the Glazer family, like to bring their assets home for the locals to see.

Big teams have been making periodic visits to the States for decades, although the scale and scope of this year’s visitors is nearly unprecedented. In the past, it’s been more about reconnecting with immigrant fan bases. Napoli and Santos, with Pele, played to nearly 50,000 in Yankee Stadium in 1968, with the European team tapping into a huge base of southern Italians in the metro New York area.

But as the global game, and its glam teams, have become more visible in the U.S. via weekly television exposure, America has become a destination of choice for brand building and income generation. Why train at home or in Switzerland and play friendlies against local clubs when you can get North American fans to pay your team a premium for getting in shape? Top tickets for these games are as much as $250.

In the case of one of MLS’s newest franchises, New York City F.C., ownership, rivalry and brand building interests come home to Yankee Stadium, where Liverpool meets Manchester City on July 30. NYCFC is jointly owned by the Yankees and Man City, while Liverpool is owned by Fenway Sports Group, the same outfit, controlled by John Henry, that owns the Boston Red Sox. Can’t you just smell the hatred brewing?

Liverpool started its tour with a 1-0 loss in sold-out Fenway Park to another American-owned club, A.S. Roma, which is spending its third consecutive summer in the States with a two-week, four-match schedule. Arsenal, which plays a friendly against the MLS’ New York Red Bulls in Harrison, N.J. on August 2, is partly owned by American Stan Kroenke. And Arsenal knows that, as a global brand, it needs to build its fan base in the U.S. Indeed, Arsenal CEO Ivan Gazidis is no stranger to these shores, having served as deputy commissioner of the MLS before heading to London.

“I can tell you something I’m completely convinced of ,” noted Gunners boss Arsene Wenger on the team’s web site, “before people didn’t know who you were, but now every American guy I met knows Arsenal, knows England and knows the Premier League.” No reason then not to sell a piece of it to them. 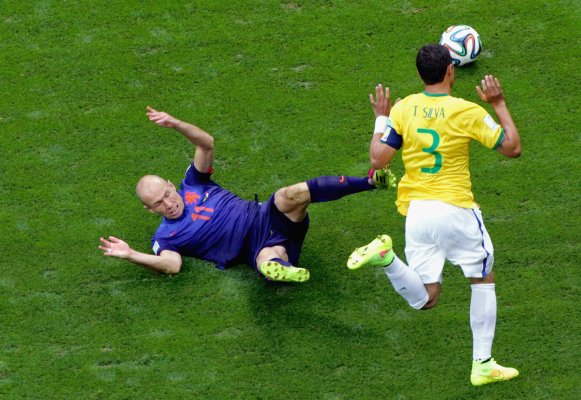 Here's the Winner of the World Cup's Golden Dive Award
Next Up: Editor's Pick