I’m a 30-year-old, single, heterosexual male and I’ve never read 50 Shades of Grey. I’m approaching this trailer as someone interested primarily in what this book, and now movie, reveals about women, so take it for what it’s worth.

Before I press play, here are the two things I know about this book/movie.

I watched the trailer straight through once and my only discernible impression is that this movie looks aggressively boring. So, I decided to watch the trailer again while pause-play-pausing my way through it and annotate my reactions in the moment.

00:12 – Newspaper????? What!? That is the fanciest newspaper office ever in the history of news. Or paper. Are they hiring? (JUST KIDDING, TIME)

00:13 – Oh wait SHE’S the reporter interviewing HIM. OK, never mind. I know other offices are that fancy.

00:30 – The girl is reciting adjectives in a voiceover: Polite. Intense. Smart. Really intimidating. In context, I have to interpret this as a list of attributes for some kind of man-of-my-dreams fantasy, so, obviously, I’m measuring myself against it. I’m pretty polite and I may be uncomfortably intense sometimes and I’m smart enough to fake it around smart people for at least a few minutes but I don’t think I’m very intimidating. Looks like I need to get a mega form-fitting suit. And a giant office with tons of windows and a weird little white chair for visitors.

00:58 – My God, is this a horror movie? Suddenly the soundtrack is screeching and the elevator doors are closing in on her eye and then there’s some kind of photo shoot for some reason. OK, unpausing.

1:04 – “I exercise control in all things.” Here we’ve come to the central question posed by the 50 Shades phenomenon: A man who professes to exercise control in all things becomes (I think? Right?) a cultural symbol for sex god, but isn’t the same basic impulse the foundational evil in stalkers and abusive partners and etc.? That line could literally have been lifted from 1991’s Sleeping With the Enemy, which is like proto-50 Shades but the dark side. Also I’m forgetting that I’ve never read or seen this and I actually know nothing about it but just saying.

1:24 – “I had a rough start in life, you should steer clear of me.” Lame the first time someone said it. Now just…ugh whatever. Moving on. Nice Rocky hoodie running scene though.

1:44 – Why are they in an airplane? This feels like one of those scenes in Entourage where the gang randomly goes to Vegas or a tropical island or wherever for kicks. Which looks fun, I’m not complaining. I did a trick plane ride like that once. It was pretty rad. Moving on.

1:51 – If you have bondage equipment in your house it feels against the rules to keep it in a locked dungeon-ish room, but maybe that’s why I’m not in the subculture because it also seems obvious that you would do just that, so.

2:01 – Flickering images of naked backs and whips and then he’s carrying her and then she’s tied up and heaves herself forward in apparent ecstasy and I must say this sadomasochism all looks exceedingly gentle and sweet and not painful at all. Is that what the book is like? I guess that would explain the mass appeal.

2:12 – Cool soundtrack. Pretty much safe for work though, and I was really hoping an editor would walk by and gasp as I watched that. Thanks for nothing, 50! 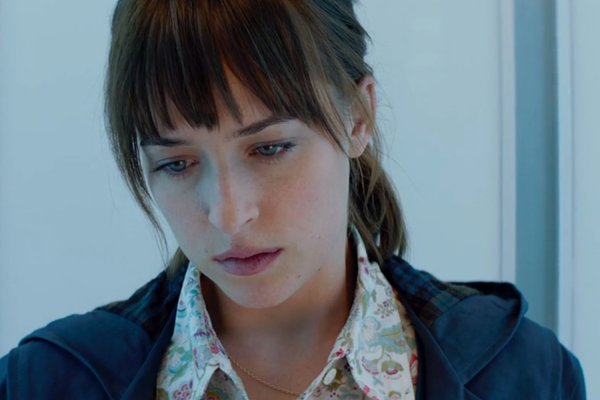 5 Things to Do While You're Waiting for 50 Shades of Grey to Come Out
Next Up: Editor's Pick