When Michael Jackson died, people mourned the death of a giant, but they also mourned the death of the cultural consensus he represented. They mourned the passing of a figure so huge and so central to pop culture that seemingly everyone knew him, no matter where they fell in the cultural divide. In that respect, I suspect that part of the tidal wave of excitement greeting the release of Mandatory Fun, the ecstatically received new album from pre-eminent Michael Jackson parodist “Weird Al” Yankovic, comes from the re-emergence of a figure whose popularity transcends cultural and generational boundaries, who can truly be said to be a household name. The album charted at No. 1 on the Billboard 200 in its first week, a first for the artist.

The mainstream that Jackson personified doesn’t seem to exist anymore. The pop-culture world has fractured too violently into too many different warring factions for the center to hold. If a mainstream exists at all anymore, it can be pieced together, makeshift, from the base components of an album like Mandatory Fun. The album cements Yankovic’s status as an invaluable uniter in a wildly divisive music world.

Yankovic’s music unites his older fans with their past, with the MTV or radio-obsessed kids they used to be and the central role he played in their musical education. But it goes beyond that. Yankovic’s polka medleys are a brilliant microcosm for his take on pop music. Mandatory Fun’s obligatory polka medley, “NOW That’s What I Call Polka,” is essentially Girl Talk for the middle-aged and out of date, a high-energy mash-up of seemingly every inescapable single of the past three years.

One of the overlooked benefits of growing older is the freedom from having to follow pop music closely, from feeling obligated to have an opinion on every important new act or flash in the pan. Part of the brilliance of Yankovic’s albums is that he follows pop music and the rampaging idiocies of the pop chart so that his often middle-aged fans don’t have to, content that dear old Uncle Al will translate the ephemeral ditties and one-hit wonders of the day into language they understand, the musical vocabulary of the genially wacky spoof.

Mandatory Fun might just be the ideal way to experience contemporary pop music. It offers the catchiness of “Blurred Lines” without the rapey gender politics, leering sexism and Robin Thicke’s pervy personality; Miley Cyrus without the twerking and lascivious tongue waggling; and LMFAO without, well, everything that makes them obnoxious, which is everything.

Yankovic famously released eight videos from the album in eight consecutive days, including the zeitgeist-capturing smashes “Tacky” and “Word Crimes.” It’s a strategy that allowed the savvy and prescient Yankovic to leverage his connections with Internet dynamos like Nerdist, Funny or Die and College Humor (needless to say, at least some of those kids who grew up worshiping Al ended up in positions of power inside corporate suites), who helped produce the videos and publicize the album, while highlighting the broad-based appeal of a release that includes not only relatively timely takes on smashes from the likes of Lorde, Imagine Dragons, Iggy Azalea and Pharell but also brazenly untimely homages to Southern Culture on the Skids, the Pixies, Cat Stevens and both a polka and Yankovic’s first-ever march (“Sports Song”).

The every-song-a-single approach is particularly savvy, given the central role singles play in the pop landscape. People aren’t buying albums the way they did before; Robin Thicke’s new album Paula, for example, is flopping, while the infectious beat for his signature song is doing great things for a man who is impishly using it to play grammar bully to a delighted populace.

YouTube was to supposed to maim, if not destroy, Yankovic’s career by flooding the site with a slew of younger, hungrier and lewder parodists who didn’t need a major label to put out parodies, just a video camera and some goofy new lyrics to a familiar song. Yet in 2014, the parody market is still “Weird Al” Yankovic, followed distantly by everyone else. Considering the ways the industry has changed over the past 10 years, it’s remarkable how little progress everyone else has made. Nostalgia undoubtedly plays a role; the release of a new “Weird Al” album can’t help but inspire wistful memories of long-ago days watching Al goof his way through videos spoofing Madonna, Kurt Cobain and countless other giants who are either gone or irrevocably changed, whereas Al never seems to age.

For all the changes in the industry and outside it, a “Weird Al” Yankovic parody of a hit song still feels official and important in a way no other spoof does. For all the pretenders on the Internet, when it comes to parodies, it sure seems like folks still want the 54-year-old they grew up with and who still represents the gold standard for funny music.

Pop-music parodies occupy one of the smallest, least respected ghettos in pop music. Yankovic has never been one to think small, however, and from the very beginning, his domain has been all of popular music, not just the tiny little subsection devoted to his particular specialty. That mind-set is paying enormous dividends right now. It is a halcyon moment for an inveterate uniter with a view of pop expansive enough to fit the totality of recorded music snugly inside one of his fat suits.

Nathan Rabin is a staff writer for The Dissolve and the author of Weird Al: The Book (with “Weird Al” Yankovic) and You Don’t Know Me But You Don’t Like Me. 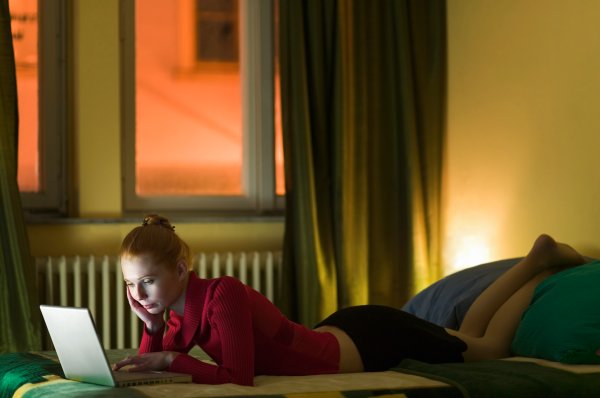 Stop Fem-Splaining: What 'Women Against Feminism' Gets Right
Next Up: Editor's Pick