From Gaza to Ukraine, the Effects of World War I Persist

It was supposed to be over in a matter of weeks. In the summer of 1914, the European war that began in the aftermath of the assassination of Franz Ferdinand drew great armies into the fields, launched ships of war upon the seas and engaged imperial ambitions and fears. There was, however, a sense of optimism among several of the combatants, an expectation that victory would be quick. “You will be home before the leaves have fallen from the trees,” Kaiser Wilhelm II told the German troops in the first week of August.

Of course, it wasn’t over by the time the leaves fell, and what became known as the Great War really isn’t over even now. From the downing of the civilian Malaysian airliner by Moscow-supported insurgents over Ukraine to the Israeli-Palestinian combat in Gaza to Iraq, Syria, Afghanistan and Iran, the troubles of our time directly descend from the world of 1914–18, the era that inflamed ethnic and nationalistic impulses and led to the ultimate creation of new nation-states, especially in the Middle East.

To understand the madness of the moment, then, one needs to take a long view–one that begins in 1914 and not, as many Democrats would have it, with the election of George W. Bush or, as many Republicans think, with the election of Barack Obama. The spectrum of political conversation in our time is, to borrow a phrase from Abraham Lincoln, inadequate to the stormy present.

The 19th century has been said to have ended in 1914, with a war that became, in the words of historian David Fromkin, “in many ways the largest conflict that the planet has ever known.” One could argue that the 20th century lasted only 75 years, ending under the Administration of George H.W. Bush, with the fall of the Berlin Wall in 1989 and the death of the Soviet Union (itself a product of the Bolshevik Revolution of 1917). As the news of this summer reminds us, we are now in a world much like that of 1914, without a truly controlling order.

Americans who grew accustomed to a largely static balance of power during the Cold War must teach themselves to think in kaleidoscopic terms, not binary ones. Our national imagination is still partly shaped by the FDR-JFK rhetoric of American responsibility and the idea that we are capable of bearing any burden and paying any price to bend the world to our purposes. Yet we must be realistic–not defeatist but realistic–about our power. While we should never give up the conviction that we can effectively exert our will around the globe, we should also appreciate that any undertaking is inherently limited, a point supported by the experience of the American President of the 1914–18 era, Woodrow Wilson, who believed that the war of that age would end all wars. He was wrong–woefully so. The first Bush was closer to the mark when he spoke, usually privately, of how foreign policy was about “working the problem,” not finding grand, all-encompassing solutions to intrinsically messy questions.

And those questions today remain urgent and dangerous. In his insightful book Europe’s Last Summer, Fromkin writes that “it takes two or more to keep the peace, but only one to start a war … An aggressor can start a major war even today and even if other great powers desire to stay at peace–unless other nations are powerful enough to deter it.” To think of another conventional conflict on the scale of the Great War–16 million dead, 20 million more wounded–stretches credulity. Still, the forces of ambition, greed and pride are perennial in the lives of men and of nations, and wars of any size bring with them large and unintended consequences.

Summing up August 1914, historian Barbara Tuchman wrote, “Men could not sustain a war of such magnitude and pain without hope–the hope that its very enormity would ensure that it could never happen again and the hope that when somehow it had been fought through to a resolution, the foundations of a better-ordered world would have been laid.” We know now that such hope was illusory. It did happen again, from 1939 to 1945, and now, a century on, we live in a world that remains vulnerable to chaos and mischance and misery. Such, though, is the nature of reality and of history, and we have no choice but to muddle through. There is, in the end, no other alternative, whether the leaves are on or off the trees. 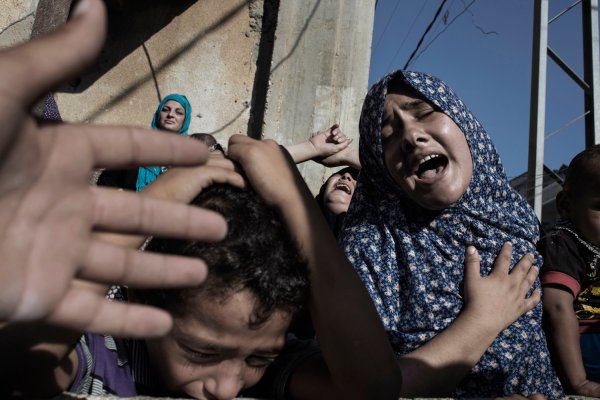 In Gaza, a Just but Bloody War
Next Up: Editor's Pick