Illustration by James Walton for TIME
By James Poniewozik

I have seen Sharknado 2: The Second One, but I cannot properly review it. That’s because I watched the Syfy channel movie–the sequel to last summer’s viral hit about killer fish flying in a killer storm–on a review disc, in advance. In my office. Alone. Like a loser.

I have seen Sharknado 2 the movie, in other words, but I have not had Sharknado 2 the experience. That experience, when the movie airs on July 30, will involve watching it in a crowded room or, better, with limitless friends on social media. The movie is like a cook-at-home meal: the ingredients–the script, the bargain special effects, Ian Ziering chainsawing a great white in half–don’t become dinner until you watch it, wisecracking and making merciless fun, turning Twitter and Facebook into the world’s largest midnight Rocky Horror screening.

And that’s just fine with Syfy. In fact, the channel badly needs you to do that. Sharknado 2 is just an extreme example of how trends in technology and business are pushing TV networks to make shows that play well in the online world.

Last year’s Sharknado, about a superstorm that sucked toothy killers out of the Pacific and hurled them at Los Angeles, landed in the waters of social media like a bucket of delicious chum. It wasn’t a crazy hit, but it was big by the standards of a Syfy movie, and unusually, it grew in reruns: it had 1.4 million viewers for its premiere, 1.9 million for its second airing, 2.1 million for its third. And those ratings came in large part from buzz on social media, which it hit like, well, a tornado made of sharks.

The first thing Sharknado had going for it was its title, a portmanteau of American excess to match the cronut and the turducken. It was ridiculous, shareably so, and Sharknado was generating gale-force winds online long before it even aired.

Then we actually saw it, and good God, was it stupid and glorious. People were knocking out sharks with bar stools, flying through the air into fish gullets, throwing bombs into tornadoes and getting showered with freshly detonated sushi. On Twitter, 1 in 6 tweets about TV that night was about Sharknado; it was a trending topic even in countries where it wasn’t airing. Everyone from political pundits to Mia Farrow joined in the Sharknado-nado.

Just as a tornado erupts from converging hot and cold air masses, the Sharknado is a perfect storm formed from two opposing media trends colliding. The first is that technology threatens TV ratings and revenue: when people record shows and watch them long after they air, networks don’t make money off the ads. (People now watch two hours more video a week than in 2011, Nielsen says–but about 10% less of it is live TV.) The second is that technology can help traditional TV, by driving viewers to watch certain buzzy shows live: if your friends are burning up Twitter about Scandal, you want to OMG along in real time.

This means that networks are increasingly interested in creating “events,” like Sharknado or NBC’s live Sound of Music, that people will want to watch as they air. When you tweet about Sharknado, you’re not just a viewer–you’re a marketer, creating urgency as effectively as did the theme from Jaws. (Syfy even chose the sequel’s title through a Twitter contest, the better to get the Twittersphere invested.)

Now Syfy must make sharklightning strike twice. It’s hard to re-create camp on purpose; Sharknado 2 is like an indie band trying to keep its cred after a massive radio hit. (There’s even a “jumping the shark” joke in Sharknado 2. Because of course there is.) Plenty of people want to ride this sequel’s winds: there are cameos from the Kellys Ripa and Osbourne and Daymond John (of Shark Tank, natch), and there are cross-promotional roles for Syfy’s NBCUniversal sibs the Weather Channel and the Today show. The production quality has been upgraded ever so slightly, from Z movie to, oh, maybe Q movie.

Yet the sequel somehow manages to re-create the dumb fun and stream-of-consciousness plot of the original, without letting the in-jokes overwhelm the fin jokes. Most important, the movie is a target-rich environment for DIY second-screen snarking, with scenes like …

Ah, but I shouldn’t spoil any more of the fun, for you or for me. I’ve got to save my best lines for Twitter. 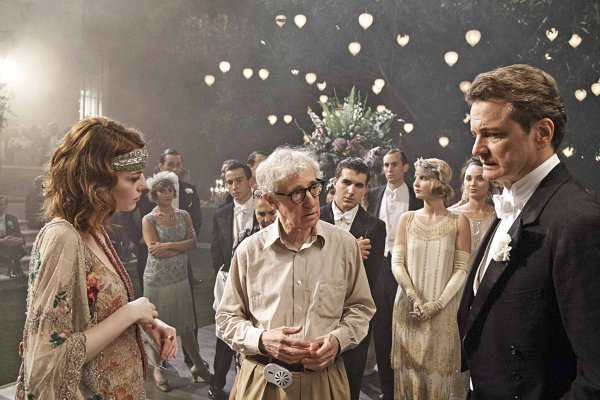 Medium Woody in Magic in the Moonlight
Next Up: Editor's Pick