Displaced Palestinians from Beit Hanoun sleep inside the UNRWA school in Jabalia, July 23, 2014.
Alessio Romenzi for TIME
By David Stout

The UN Human Rights Council voted Wednesday to launch an inquiry into potential violations of human rights by Israel in its conflict with Hamas in the Gaza Strip — a move Israeli Prime Minister Benjamin Netanyahu quickly labeled a “travesty.”

The council’s inquiry would investigate “all violations of international human rights law and international humanitarian law” in Palestinian areas. The resolution was drafted by Palestine, and supported by 29 of the 46-member council. The U.S. voted against the resolution, while European countries abstained.

Prime Minister Benjamin Netanyahu dismissed the UNHRC inquiry as a “travesty” and condemned the organization for failing to bring Hamas to account for its own conduct.

“The UNHRC is sending a message to Hamas and terror organizations everywhere that using civilians as human shields is an effective strategy,” said the prime minister in statement published on his official Facebook page.

The vote came after the UN High Commissioner for Human Rights, Navi Pillay suggested that war crimes might have been committed in the Gaza Strip, accusing Israel of doing too little to avoid civilian deaths, and condemning Hamas for “indiscriminate attacks” on Israel.

“There seems to be a strong possibility that international humanitarian law has been violated, in a manner that could amount to war crimes,” Pillay told the U.N. Human Rights Council. “Every one of these incidents must be properly and independently investigated.”

Civilian casualties in Gaza have soared, according to the UN. As of Thursday, 757 Palestinians had been killed, of which 571 were civilians, including 182 children and 95 women, according to the UN Office for the Coordination of Humanitarian Affairs. At least 30 Israelis have also been killed during the conflict, mostly members of the armed forces.

Israeli tanks and aircraft continued their thrust into the sliver of Palestinian coastal territory on Thursday, aiming to eliminate Hamas’s rocket systems and destroy the matrix of tunnels that Israel says the Islamist group uses to wage war.

The Israel Defense Forces (IDF) said it struck 35 targets overnight. But there were more reports of Palestinian civilians killed; six members of the same family and an 18-month-old infant boy were killed when an Israeli airstrike hit the Jebaliya refugee camp, according to the Associated Press.

While whispers of a possible humanitarian truce ahead of the upcoming Eid al-Fitr festival wafted through the social media sphere this week, there have been no concrete signs that such an armistice will be signed. “It would not be accurate to say that we expect a ceasefire by the weekend,” said a U.S. official, who spoke on condition of anonymity to Reuters.

A smattering of international envoys have been shuttling across the Middle East throughout the week in attempt to wrangle up some sort of agreement that remained elusive as of Thursday morning.

In Qatar, Hamas leader Khaled Meshaal signaled that the organization would consider a humanitarian ceasefire with Israel, but reiterated that his group would not strike a deal with the Netanyahu Administration until Israel agreed to end its seven-year blockade of Gaza.

“We will not accept any proposal that does not lift the blockade,” said the Hamas chief in a televised address Wednesday. “We do not desire war and we do not want it to continue but we will not be broken by it.”

Analysts say Israel is facing mounting global pressure as civilian losses grow in Gaza, but add that Hamas is facing plenty of pressures of its own.

“Hamas is on the receiving end and they can only go a certain distance in terms of absorbing losses and holding a united front within Gaza,” Sultan Barakat, the director of research at the Brookings Doha Center, tells TIME. “Soon they will run out of supplies. There will be an increased number of people displaced within Gaza and people will turn their anger towards them.” 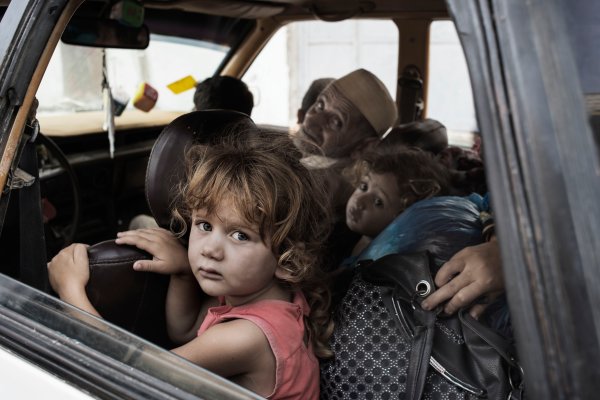 From Gaza to Israel, Innocents Caught in the Crossfire
Next Up: Editor's Pick