Kerry on Gaza: 'This Needs to End for Everybody'

U.S. Secretary of State John Kerry speaks to reporters after meeting with Palestinian President Mahmoud Abbas in the West Bank city of Ramallah on July 23, 2014.
AP
By Maya Rhodan

U.S. Secretary of State John Kerry said Wednesday that there has been some progress made over the past 24 hours in achieving a cease-fire in Gaza. Kerry’s comments came following a meeting with Palestinian Authority President Mahmoud Abbas.

“We had a good conversation today about how we can take further steps, and we’re doing this for one simple reason: The people in the Palestinian territories, the people in Israel, are all living under the threat or reality of immediate violence, and this needs to end for everybody,” Kerry said following the meeting in Ramallah.

As of Wednesday, approximately 635 Palestinians, 77 percent of whom were civilians, have reportedly been killed in the ongoing conflict between Israel and Hamas, which escalated last week when Israel commenced a major ground invasion of the Gaza Strip. At least 30 Israelis have also been killed, 28 of whom were soldiers, according to the United Nations.

Kerry is traveling to Jerusalem, Ramallah, and Tel Aviv Wednesday in an effort to broker a cease-fire deal. Kerry’s presence in the region comes after militant group Hamas, which controls Gaza, rejected a deal presented by Egypt and agreed to by Israel. Kerry said Wednesday he was “very grateful to President Abbas for his leadership, for his deep engagement in the effort to try to find a cease-fire.”

“We will continue to push for this cease-fire,” Kerry said. “We will continue to work with President Abbas and others in the region in order to achieve it. And I can tell you that we have, in the last 24 hours, made some progress in moving towards that goal.”

Following his meeting with Abbas, Kerry was set to meet with Israeli Prime Minister Benjamin Netanyahu. 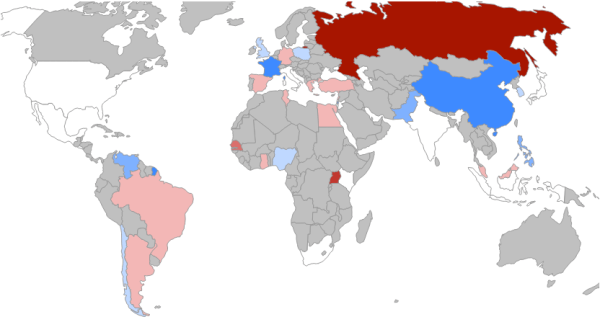 How the World Sees America Now
Next Up: Editor's Pick