Cancelled fights shown on a departure board in Ben Gurion Airport in Lod, just outside Tel Aviv, Israel on July 23, 2014.
Jim Hollander—EPA
By Sam Frizell

The Federal Aviation Administration on Wednesday extended its ban prohibiting U.S. airlines from flying to and from Israel’s main airport for another 24 hours. The renewed ban comes amid escalating violence between Israel and Islamist groups in the Gaza Strip, particularly Hamas.

The announcement came a day after a rocket launched from the Gaza Strip struck about a mile from Tel Aviv’s Ben Gurion International Airport. In response to the rocket attack, the FAA stopped all U.S. air travel in and out of the city. Just hours before the announcement, Delta Airlines and United Airlines said they were voluntarily and indefinitely suspending Israel flights. Several major European air carriers, over which the FAA holds no authority, have also voluntarily stopped flying to Israel.

“Due to the potentially hazardous situation created by the armed conflict in Israel and Gaza, all flight operations to/from Ben Gurion International Airport (llbg) by U.S. operators are prohibited for up to 24 hours,” the FAA said Wednesday in its renewed ban.

The FAA’s renewal of the ban came despite Israeli Prime Minister Benjamin Netanyahu’s plea to U.S. Secretary of State John Kerry that the FAA reverse it. The State Department said Tuesday it was not involved in the FAA’s decision to implement the ban. 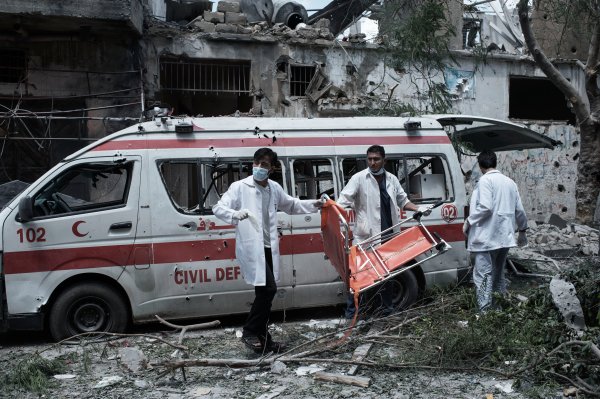 Paramedics in Gaza Face Incoming Fire to Save Lives
Next Up: Editor's Pick