Sure, the Senate has been a wasteland for eight months now, but for some Democrats it was worth sacrificing what little comity was left in the name of a bigger legacy builder for President Obama: taking the “nuclear option” on the filibuster so they could prevent Repubicans from jamming up appointments to the federal courts. And this week’s federal court decisions on Obamacare would seem to have validated that decision.

The Obama Administration is appealing the D.C. decision — which would effectively hobble the healthcare law’s subsidies—and that appeal will go before the D.C. Circuit’s full panel of 11 judges. The D.C. Circuit court is known as the second-most powerful court in the land as it often settles questions of policy given its location in the nation’s capital.

It is also the court Democrats blew the Senate up in order to stack, by stripping the minority of the ability to filibuster certain nominees—a move so toxic it became known as the nuclear option. Seven of the court’s judges were appointed by Democrats, so odds are good the court will reverse the three-judge panel’s decision and agree with the Fourth Circuit.

Such a move would prevent the case from ascending to the Supreme Court, where Republican nominees have a five-four edge, though there are similar cases pending in courts across the country, so the issue could still be decided by the Supreme Court.

But Obamacare defenders will be breathing easier knowing that the D.C. Court leans in their favor. So, maybe it was worth shredding what little bipartisanship that remained to the Democrats in Obama’s second term. The President’s greatest second term legacy may well prove to be stacking the federal courts—not just the DC Circuit but many others—for a generation. Will that be worth all the lost legislation, like reforming the VA, immigration reform, appropriations bills, and so on? Time will tell. 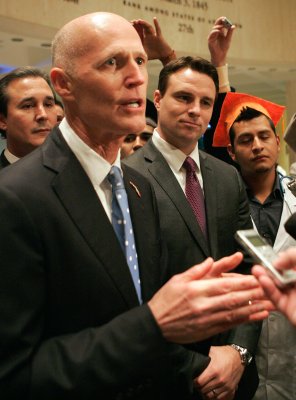 Governor Rick Scott Shows What a Real Scandal Looks Like
Next Up: Editor's Pick