Ukrainian Pilots Missing After 2 Jets Shot Down in East

An aide to separatist leader Alexander Borodai, told CNN that the two jets had been shot down by rebel fighters using a shoulder-fired missile system. However, Yarema Dukh, the Council’s press secretary, says that the jets were shot down from an altitude of 17,000 feet, an altitude she says is too high for those systems to reach. The aircrafts’ altitude, Dukh says, is instead a sign that “the planes may have been shot down by another plane.”

On top of that, though, it’s widely believed that Malaysia Airlines Flight 17, a Boeing 777 which crashed in eastern Ukraine on July 17, was shot down by a surface-to-air missile, which most likely originated from rebel-controlled territory. Flight 17 was traveling at 33,000 feet at the time of the suspected shoot-down — much higher than the Ukrainian jets.

The two jets shot down Wednesday, both Soviet-built Sukhoi Su-25 attack aircraft, were among four fighter planes returning to base after supporting Ukrainian government forces along the Russia-Ukraine border, the Council said in a press conference Wednesday. They were hit over the Savur Mogila area close to the border around 1:30 p.m. local time.

The Ukrainian aircraft were flying in the same area as where Flight 17 crashed, killing all 298 people on board. On Wednesday, 40 of the 200 MH17 passengers’ bodies thus far recovered arrived in the Netherlands for identification. The flight’s two black boxes also safely reached investigators in Britain Wednesday.

In the days before the MH17 disaster, a Ukrainian An-26 transport plane and another Su-25 jet were also shot down. A second Su-25 was fired upon, but the pilot managed to land his plane with minimal damage. 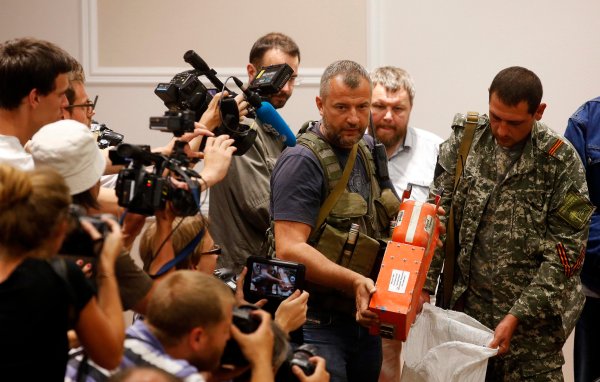