With the Election of Joko Widodo, Indonesia Writes a New Chapter

Indonesians woke up Wednesday morning to something completely new: a President who did not hail from the political or military elite.

The previous evening, the country’s electoral commission, the KPU, declared the governor of Jakarta, Joko Widodo — popularly known as Jokowi — President-elect of the world’s biggest Muslim-majority nation and third biggest democracy. After a highly polarized campaign, Jokowi and his running mate, Jusuf Kalla, won more than 53% of the vote, or some 8 million more votes than their rivals, former general Prabowo Subianto and his No. 2, Hatta Rajasa.

Unlike many established figures who dominate the political arena, the 53-year-old Jokowi came from a humble provincial background: he grew up in a riverside slum in Solo, Central Java, and does not have ties to an influential family. After a career as a furniture entrepreneur, he started in politics as mayor of his hometown less than a decade ago — and this rapid rise, along with the level of electoral enthusiasm and volunteerism his candidacy generated, has invited comparisons to U.S. President Barack Obama (the two were even born in the same year). Many see Jokowi’s win as an augury for a more mature era in Indonesian politics.

“His candidacy would have been improbable just a few years ago,” says Aaron Connelly, East Asia research fellow at the Lowy Institute in Sydney, who focuses on Indonesian politics. “This has not historically been a country in which parents told their children that they could grow up to become President.”

The bitterly contested presidential election also marks the first time that social media and the Internet played a major role in overseeing the electoral process. Taking advantage of the raw data that the KPU released on its site, concerned citizens set up websites to monitor the counting. One such site is Kawal Pemilu, or Guard the Election. Hurriedly built by Singapore-based IT consultant Ainun Najib and a couple of Indonesian programmers working for a Silicon Valley company, it was an instant hit, showing the official vote recapitulation, updated every 10 minutes by volunteers, of which there were around 700. “We wanted to fulfill the calls to guard the election by showing the data openly,” Ainun tells TIME.

With this level of openness and scrutiny, the election is being hailed as Indonesia’s most transparent and democratic. But that hasn’t stopped the loser from complaining that the poll has been “defective.” Prabowo, a former general with a tainted human-rights record, has refused to concede defeat. He initially called for the public to wait for the official count, but as it became clear the victory wasn’t his, he began attacking the KPU, accusing it of not properly investigating what he alleged was massive vote fraud — an accusation the commission has rebutted. On Tuesday afternoon, hours before the KPU’s announcement, he declared that he would not accept the official tally. His decision was widely derided by citizens and legal experts alike. (“The Indonesian people are grateful because we have escaped from the catastrophe of having a heavily stressed-out presidential candidate [as leader],” one Twitter user said.)

On Wednesday, Prabowo’s team says they would challenge the result in the Constitutional Court. Already, however, there are signs that his coalition is falling apart. During the past two press conferences on Sunday and Tuesday, in which Prabowo lambasted the KPU, running mate Hatta was conspicuously absent.

The victor, meanwhile, has been basking in congratulations. In his midnight victory speech on Tuesday, delivered at Sunda Kelapa, Jakarta’s old port, Jokowi said, “This presidential election has given rise to new optimism for us, for this nation … It is time for us to move together.” Stirring stuff, but winning the election, it must be said, was the easiest task on Jokowi’s list. Now comes the hard part — of governing a sprawling archipelago of 18,300 islands that has emerged, blinking, into democratic daylight. 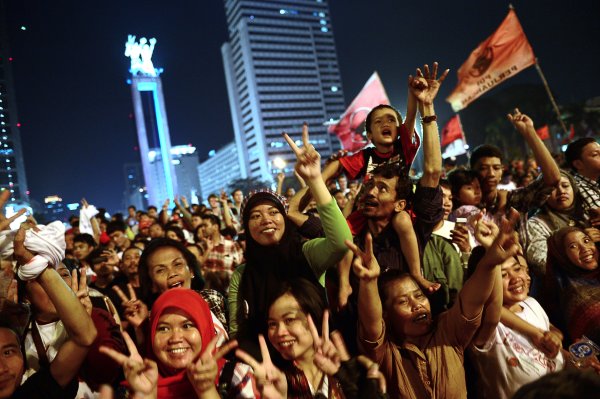 The World's Third Biggest Democracy Is in Political Limbo
Next Up: Editor's Pick