President of Honduras Expects Mass Deportations of Minors From U.S.

(TEGUCIGALPA, Honduras) — Honduran President Juan Orlando Hernández has been warned by U.S. officials to expect a enormous wave of deportations from the United States, he told TIME in an interview at the presidential palace in the Honduran capital on July 17. “They have said they want to send them on a massive scale,” he said.

Honduras has suffered with the world’s worst murder rate in any country outside a war zone, as street gangs known as maras have become increasingly linked to drug traffickers moving cocaine from the Andes region to the Unites States. Hernández said his government has worked hard to reduce this murder rate in his first months in office, but said violence is still a major problem driving the youth migration.

To combat the criminals, Hernández calls for a security plan with U.S. support, akin to Plan Colombia in which U.S. aid helped the South American nation battle drug traffickers and cocaine-funded guerrillas. The United States has a responsibility to help Honduras, Hernández says, because U.S. drug consumption is driving the violence.

The following exchange has been edited for brevity.

The wave of migration has generated a strong debate in the United States. How do explain this rapid rise in child migrants?

I believe there is a combination of factors. One is the lack of opportunities in Central America and we have to build opportunities here more quickly. Two is the issue of violence, because if you look, you will see that in the case of Honduras, the highest level of migration is in the places with the most conflict, particularly in the neighborhoods where the street gangs have become the armed wing of drug traffickers and kill each other for territorial control. . . . But the other factor, that we shouldn’t forget, is the lack of clarity of U.S. immigration policy. When the immigration debate goes on, disgracefully, the coyotes [the human smugglers] come and say, “Now is when you can bring your child from Central America.” . . . So my call to the United States is that it defines these rules with clarity.

The violence in Honduras is complex. What drives it more, drug cartels or street gangs?

What is happening in Honduras is that drug traffickers partnered with the street gangs so that the gangs did the violent work of extortion and kidnapping. What happened? When the huge packages of drugs arrived at the coast or landed in a plane, the drug traffickers said to Hondurans, “Move these drugs to Guatemala or Mexico, but I am going to pay you with drugs and you finance the operation.” So the street gangs carried out extortion and sold the drugs, contaminating society.

For this reason, I call for the principle of shared responsibility between those who produce [drugs] and those who consume them in the North. In the United States, many officials see the drug problem as basically one of health, as how much it costs to treat an addict and stop them getting involved. But for us it is life and death. That is the difference. . . .

I want to remind the North American people what happened before Mayor Giuliani in New York, how drugs, among other factors, combined to make a very difficult security situation. This happened in Los Angeles when the street gangs also moved drugs; it happened in Miami. But the fight against it was successful. [Americans] have suffered violence in their territory from drug trafficking. Well, now it is happening to us, but in much higher rates. Never in Central America, particularly in the northern triangle and in Honduras has there been so much loss of life as in this decade. Never. Never in history. And look, disgracefully, this is a not an issue that originates in Honduras.

If in the United States, there is a move to change the law to deport a minor without a court hearing would you oppose it?

I would like to ask congressmen and senators and those who make political decisions in the United States that they think first in the interest of the child, because the child as well being a human being, is more vulnerable than the adult. But also they [children] go with the very human, very natural desire to be with their parents. . . .

On the other side, if there is a child without a family member in the United States, and the law says they have to return, we are working with this. Like never before in Honduras, we are investing resources to warmly receive our countrymen, with psychologists, doctors, giving them different options that we have for job opportunities, or farming financing. We are also guiding them spiritually, because they are families that are destroyed inside. They sold everything before leaving, and they arrive frustrated. We have to reintegrate them. We are making this effort.

What has the U.S. government said to you about the issue of migration? Have they told you they are going to deport many more people?

Yes, they have said they want to send them on a massive scale. We told them that number one, we have to respect the principle of giving priority to the child. Two, in the case that a family has children that don’t have relatives in the United States, that they don’t deport them along with adults that have committed crimes there. We don’t want them to be mixed. They [U.S. officials] have understood that part, and we, knowing there are large quantities, more than usual, have had to prepare ourselves to receive our countrymen.

Are you optimistic this is the start of something better, or will it be a long, dark difficult time ahead?

It is a difficult situation. It is a humanitarian crisis that the world needs to see. How long will it last? Will it get more complicated? This depends on support from countries such as the United States and Mexico. In Guatemala, El Salvador and Honduras we are working hard.

If they help us, because this is a problem they generate, I repeat, because of the connection between the drugs they consume in enormous quantities in the United States that are produced in the south and pass through Central America, generating violence, generating this migratory flow—if they help us I am sure we will be on the route to resolves this in a short time. 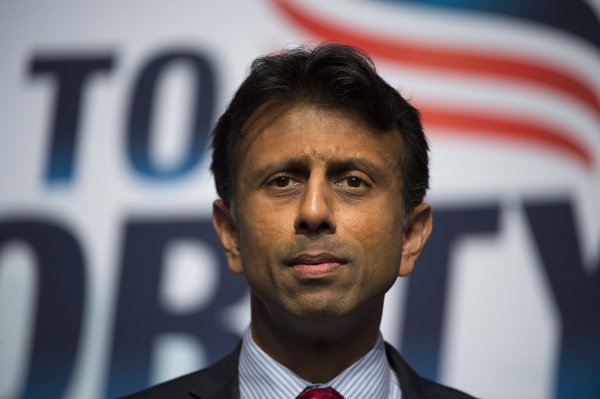 Jindal Explains His Vision for a Path to Victory in 2016
Next Up: Editor's Pick