There he is, the President of Russia, riding bare-back and bare-chested astride a galloping steed; spending $50 billion on a resort town most Russians will never see; seizing Crimea, instigating unrest in Ukraine; maybe even making himself indirectly responsible for the murder of nearly 300 innocents aboard a downed passenger plane: Vladimir Putin, shaking his fist in the face of a West that often seems unable to do more than avert its eyes.

When we in The West do look, it can seem perplexing: How can Russians buy into such blatant bravado? How can a country that is (at least nominally) democratic support such near-authoritarian power? And why does Putin remain so popular?

“Why,” Russians might ask us in return, “do you support a system of government that is so weak?” In 2010, traveling through Russia to research a novel, I was asked this a lot. I’d press people on the way Putin had cowed political opposition, castrated the parliament, brought the media mostly under his control. Usually, they’d shrug. Then they’d tell me, “At least he does stuff, makes stuff happen. Unlike in America. Where your government can’t get even the smallest things done.” Yes, Putin goes big, they’d say—maybe even sometimes goes wrong—but we in America can’t manage to go anywhere at all. Heck, we can barely manage to fund our own government, let alone set aside our squabbling long enough for anyone to actually lead.

I’m not a political scientist; I couldn’t respond with more than a layman’s opinion. I’m not a scholar of Russian history; it’s not my place to proclaim intimate knowledge of a complex and multifaceted culture. And I’m not Russian; I’d never purport to speak for the people themselves. But I am a novelist. And, as a novelist, my job is to listen—to the voices of others, to the voice of a place—and then to attempt to understand, not just intellectually but emotionally. In other words, to empathize.

Everywhere in Russia that I traveled to research my new novel, The Great Glass Sea, I felt a yearning. Sometimes it took the shape of nostalgia: a man who’d made a fortune in the early ‘90s lit up talking about that wild time of unleashed, unfettered capitalism when millions could be made overnight; a school teacher spoke of the way, under communism, everyone knew their neighbors, shared what little they had—a birthday cake cut into dozens of tiny slices to serve the entire apartment block, an apartment block now filled with families too busy trying to make ends meet to even know each others’ names; I even spoke to young men who hungered for a return of the tsar. Sometimes the yearning was for a future for which they fiercely grasped: I saw a deep appreciation for the opportunities that the release from communism had afforded, the new paths capitalism had opened up.

But in all of it there was an undercurrent of aggrievement; a sense of having to restart after seven decades of the Soviet State, having to retrace steps back to the path the rest of the world had been on—and then struggle to catch up; a feeling that the chance for Russia to remake itself had been hampered by the hegemony of the West; a knowledge that the county was less than it could be, should be, that their individual lives were lessened too; or maybe just a knowledge—especially among the populace in poorer towns and villages outside of Moscow—that what wealth and success has come to the county has come only to a very few.

That’s a feeling a great number of Americans can relate to: not only the frustration with growing inequality, but the sense that our country is also somehow becoming smaller than it should be. Here, when our sense of self is threatened, we turn to historical mythology that buttresses our belief in who we are: The American Dream, our forefathers wrestling with what that would be, the presidents who, through our beloved democracy, shaped how we understand it now—FDR, JFK, Reagan. We look for the next in that mold.

But Russians don’t have that history. Theirs is one in which revolutionary uprisings led to instability before being channeled by a system of control; one in which democracy is associated with a time of devastating economic collapse. We all know the long history of Russian strongmen—from Ivan the Terrible to Joseph Stalin—but can you imagine having that history as our own, having those leaders to look back on? Can you imagine our own country collapsed, our own inequality increased, our own dreams squeezed? Maybe you can, all too well. Now imagine that we had a leader who not only gave us hope, promised us change, but delivered.

Josh Weil is the author of the novel The Great Glass Sea and the novella collection The New Valley, which was awarded the Sue Kaufman Prize from The American Academy of Arts and Letters. A Fulbright Fellow and Nation Book Award 5-under-35 honoree, he has written for The New York Times, Granta, and Esquire. 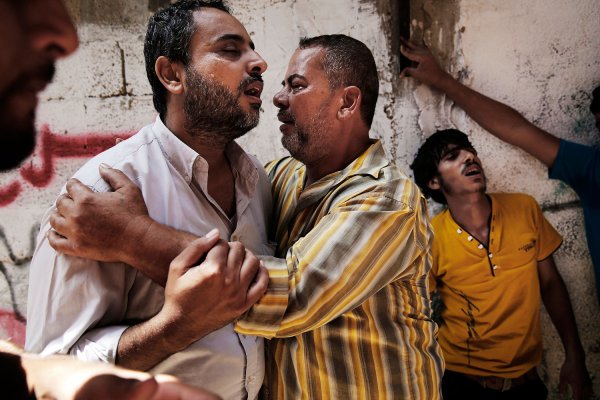 Parties Scramble for Ceasefire
Next Up: Editor's Pick