First lady Michelle Obama, a longtime supporter of healthier eating and physical fitness, is surrounded by children as she expands her push for America to drink more water, at a "Drink Up" event at the White House.
J. Scott Applewhite—AP
By Maya Rhodan

It’s been nearly a year since the First Lady launched the “Drink Up” campaign, a subset of the signature effort to promote healthy choices for kids that focuses on water. But instead of attacking the sugary, carbonated drinks and juices that contribute to the widening waistlines of our nation’s kids, “Drink Up” attempted to flood the market with positive, pro-water messaging.

At an event in the White House State Dining Room, the first lady said those who have been involved in promoting “Drink Up”—from the American Beverage Association to the Obama’s Portuguese water dog Sunny —have succeeded in making water “cool.” “I’m confident that in the coming months and years we will see people across the country drinking more and more water,” Obama said.

Their efforts have been proof that when you market and promote healthy choices as fervently as junk food, “then kids actually get excited about these products, and families actually buy them and consume them,” Mrs. Obama added. Seven organizations, including Brita, Nalgene, Haws Corporation, and S’well bottle, recently joined the campaign to promote the consumption and accessibility of water. And so far, according to a study conducted by Nielsen Catalina Solutions on the impact of the “Drink Up” campaign, online ads have helped fuel a 3% lift in sales of bottled water, worth about $1 million.

It’s good news for a campaign that came out the gate to criticism from nearly all sides. Some argued Mrs. Obama’s messaging about the benefits of water, which she called a natural “energy drink,” was inflated. Others said she should be promoting drinking tap water over bottled for the sake of the environment. While many were critical of the fact that instead of vilifying soda companies like Coca-Cola and Pepsi she partnered with them, which seemed contradictory given the direct link from sugary drinks to obesity.

“It’s less a public health campaign than a campaign to encourage drinking more water. To that end, we’re being completely positive,” Lawrence Soler, president and CEO of Partnership for a Healthier America, said at the time of the campaign’s launch. “Only encouraging people to drink water; not being negative about other drinks. ”

A year later, however, tensions have cooled. “It’s terrific that the First Lady is working to make water more available, more cool,” said Margot Wootan of the Center for Science in the Public Interest. “Increasing the appeal is one part of what needs to be done to reduce the consumption of other beverages.”

And meanwhile, First Lady Obama has gotten tougher on her efforts to promote healthier lifestyles. Though Tuesday was about fun and positivity—a group of local YMCA kids on the South Lawn even “surprised” the First Lady with a 60-by-40 foot water drop made out of 2,000 “Drink Up” branded reusable bottles—the anti-junk undertones didn’t go unnoticed. She even took time to mention the U.S. Department of Agriculture’s healthy school lunch standards she championed in 2010 and has been fighting since May to protect.

On Tuesday, the general message was, “don’t give up on our kids.”

“We need to keep working together within industries and across industries to help our kids lead healthier lives,” the First Lady said. ” And if we do all that, then I am confident — I continue to be confident that we can give our kids the bright, healthy futures they deserve.”

This story was updated to clarify that the survey on Drink Up was performed by Nielsen Catalina Solutions, a joint venture between The Nielsen Company and Catalina Marketing Corporation. 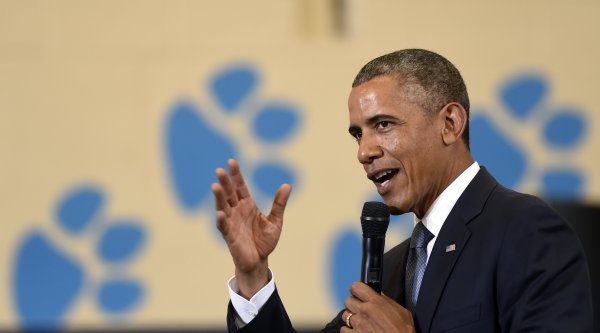 President Obama Plans to Act as Mentor in 'My Brother's Keeper' Initiative
Next Up: Editor's Pick