Missiles don’t shoot down airliners. People do. But determining whose finger pushed the button that sent a guided rocket into MH17 is a lot tougher than determining that it was a missile that brought the Boeing 777 down, killing all 298 aboard.

While the smoke has cleared from the crash site of Malaysia Airlines Flight 17, and its victims begun their long journey home, much smoke—and some mirrors—remain for those seeking to determine culpability. U.S. officials said Tuesday that their latest intelligence suggests that pro-Russian separatists acted alone, without Moscow’s help.

But that’s a distinction without a difference. The Russian government has fanned and fueled pro-Russian separatists in eastern Ukraine for months. There’s little chance the rebels would have been able to shoot down the jet—if indeed that is what happened—without Moscow’s support. Implicit in that latest assessment is Washington’s eagerness to avoid pushing Russian President Vladimir Putin into a corner. Washington is trying to entice him into abandoning his support for the separatists.

Amid the ferocious propaganda battle, powered by dueling briefings and instant analysis on social media, it’s important to remember both sides have been caught fudging before.

Moscow took nearly a week before finally acknowledging it shot down Korean Airlines Flight 007 in 1983, killing all 269 on board. The U.S. denied early Soviet reports that Moscow had shot down a U-2 spy plane in 1960—until it produced Francis Gary Powers a week after his plane was shot down (and the weapons of mass destruction used to justify the 2003 U.S. invasion of Iraq—weapons that remain MIA—are often cited when questioning the trustworthiness of U.S. intelligence claims).

It has been nearly a week since the plane crashed. The pair of black boxes, at last in the hands of Malaysian authorities, are unlikely to offer many clues. The crew aboard the plane likely had no knowledge they were under attack, so there’s probably no conversation on the cockpit voice recorder detailing what happened. It’s also likely that the flight data recorder will show everything aboard the plane was normal—until it shut down as the plane disintegrated.

There is growing evidence that some kind of missile warhead peppered the plane with shrapnel. An anti-aircraft missile’s warhead generally shatters as it comes within 100 yards or so of its target, flinging hundreds of high-velocity shards of shrapnel into it. They cripple the plane’s flaps and engines, severe fuel lines and can lead to its near-instantaneous destruction.

The shrapnel plays into both competing narratives. The Russians have suggested, without offering proof, that a Ukrainian Su-25 may have fired the missile that brought the plane down. The U.S., showing how much remains unknown, didn’t dismiss the Russian claim. “I haven’t seen any information that indicates a Ukrainian jet,” State Department spokeswoman Marie Harf said Tuesday. “We’re still looking into it, obviously. The president of Ukraine has said there was not, but again, we like to independently verify things.”

Russian officials also indicated that their own intelligence shows that Ukrainian missile systems were in the area and could have downed MH17. Moscow has argued that photographs of purported Russian missile systems inside Ukraine, and taped phone calls implicating Ukrainian rebels and their Russian allies in the shootdown, have been doctored, or are from different times and different places than the shootdown and its aftermath July 17.

The rest of the world—the U.S., Europe and Ukraine—believes that an SA-11 surface-to-air missile—fired either by pro-Russian separatists or Russian troops themselves, from rebel-held territory in eastern Ukraine—is responsible. Chemical testing of any explosive residue left on the remnants of the plane—or the missile—might pinpoint the kind of missile involved.

Smarting under increasing global pressure, Russian generals went on the offensive at a briefing Monday where they claimed a Ukrainian fighter jet flew within two miles of MH17 despite Kiev’s contention that no other aircraft were close by. And if an SA-11 Buk missile downed the jet, Lieutenant-General Andrei Kartopolov said, it didn’t come from Russia. Moscow hasn’t given pro-Russian Ukrainian separatists missiles, he added, “or any other kinds of weapons or military hardware” (that claim set off howls of laughter from inside U.S. intelligence and military circles).

“According to the U.S. declarations, they have satellite images that confirm the missile was launched by the rebels. But nobody has seen these images,” Kartopolov said. “If the American side has pictures from this satellite, then they should show the international community.”

If Monday’s Russian briefing—complete with radar images flashing across giant screens—was state of the art, Tuesday’s U.S. posting of a graphic designed to show how the shootdown happened was crude. The American embassy in Ukraine posted the sketch, which quickly turned up on cable television. But it listed no sources for what it supposedly showed, and was widely ridiculed online for its lack of provenance and authority.

“It’s commercial imagery that’s available commercially,” the State Department’s Harf said Tuesday. “Flight paths are obviously publicly available information.” But it’s the alleged trajectory of the missile that’s key. Who added that? “I don’t think anyone here did,” Harf said. “I think this is just something we’ve been using internally inside the broader USG [U.S. government] who’s been talking about this.”

Ukraine and Russia were involved in a similar case more than a decade ago. In 2001, Kiev belatedly acknowledged that its military mistakenly shot down a Siberia Airlines plane over the Black Sea, killing all 78 aboard.

Coming less than a month after the 9/11 attacks, Russians initially suspected Chechen rebels for the shootdown. Back when Moscow and Kiev had warmer relations, the Russians declared that U.S. intelligence suggesting a wayward Ukrainian missile was to blame was “unworthy of attention.”

Putin, no less, denied that the plane could have been downed by a Ukrainian missile. “The weapons used in those exercises had such characteristics that make it impossible for them to reach the air corridor through which the plane was moving,” he said shortly after the shootdown, while in his first of three terms as Russian president. So were terrorists responsible? “The final judgment of that and the cause of the tragedy,” he said, “can only be made by the experts after very careful study.”

Ultimately, such study concluded that a Russian-built Ukrainian S-200 flew past its target drone after a second missile destroyed it. But instead of self-destructing, the S-200 locked on to the civilian airliner 150 miles away and blew it out of the sky. 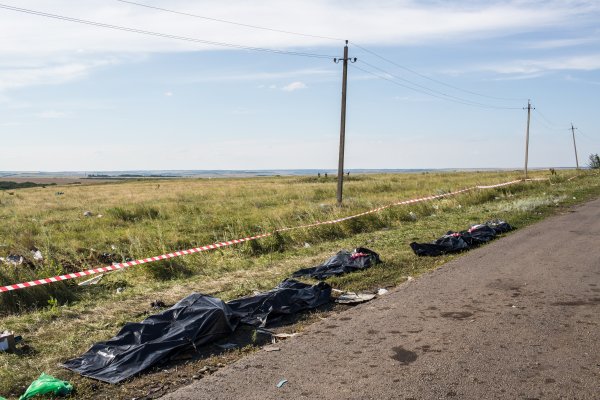