Have the Feds Made School Food Worse with Government-Approved Junk?

Last week I attended the School Nutrition Association’s annual meeting in Boston, a gathering of the nation’s school food service workers. While most of the controversy lately has focused on the federally-required improvements to nutrition standards for school lunches, getting lost in the shuffle are new standards coming online this fall for school snacks and beverages.

These foods are known collectively as “competitive foods” because they compete with the school meal program; think kids eating their lunches out of vending machines. With schools desperate for extra cash, the likes of Coca-Cola and Frito-Lay take full advantage by hawking their unhealthy products to schoolchildren.

This problem caused Congress and the White House to include in its 2010 Healthy, Hunger-Free Kids Act requirements that U.S. Department of Agriculture set nutrition guidelines for foods sold outside the school meal program. (Thanks to a lawsuit filed by the soda lobby some thirty years ago, a court found that USDA had no authority over soda and junk food, and it’s taken this long to correct that decision.)

To help guide USDA, the Institute of Medicine made science-based recommendations to the agency for the best nutritional approach. But as often happens in Washington, what starts out as a public health policy comes out the other end as industry-friendly, watered down rules.

Instead of insisting that schools do right by kids – and the taxpayer-funded school meal program – by removing vending machines altogether, the feds just required a few tweaks to the ingredients. Big Food put its sophisticated R&D departments to work and out came “USDA-compliant” junk food. Several vendors proudly told me that their “healthier” products weren’t even available in stores, as if this were a good thing.

But is it really better now that “reduced fat” Cheetos have replaced regular in schools? Can parents rest easier knowing their kids are buying “whole grain” Pop-Tarts still containing 15 grams of sugar? Can USDA really claim that the “low sugar” line of Gatorade products (called G2) is significantly superior nutritionally, given that they contain artificial sweeteners and dyes?

As I warned in my comments to USDA last year, too narrow a focus on nutrition indicators such as whole grain and levels of sugar and fat would not address the bigger problem with competitive foods: branding. Corporations hawking junk foods and beverages in schools have no problem tweaking a few ingredients as long as they remain in front of the eyeballs of impressionable youngsters. Schools are not only big business, they are essential to ensure brand loyalty for life.

While real food such as fresh produce, along with truly healthy snacks such as dried apples, were also on display in the expo hall, several vendors I spoke to complained about the challenge of being able to compete with the likes of Kellogg’s and PepsiCo on price, given the economies of scale.

Now with the federal government seal of approval on dressed up junk foods, what messages are we sending to children in their place of learning? That Cheetos and Pop-Tarts are great snacks as long as they contain a sprinkling of “whole grains”? That blue-colored Gatorade is an acceptable beverage as long as it contains fake sugars? Some have defended these changes as incremental. OK, but given how hard it was to get the current rules passed (not to mention the ongoing fight over school meals), it’s likely to be a very long time before we see real improvements.

Meanwhile, school kids are now being exposed to deceptive marketing messages on health-washed junk foods, brought to them by mega-corporations who aim to get them hooked on a lifetime of bad eating habits, all courtesy of the federal government. 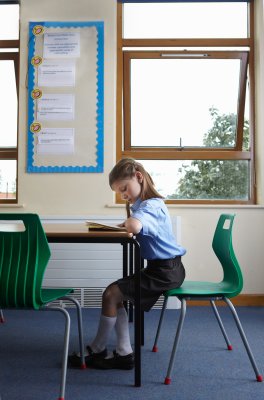 Learning to Read Does Not End in Fourth Grade
Next Up: Editor's Pick