What the Guilty Verdict Means for Amanda Knox

A court in Italy has found Amanda Knox guilty of murdering British student Meredith Kercher in the Italian city of Perugia in 2007. The court also found her Italian ex-boyfriend Raffaele Sollecito guilty.

The decision came after 11 hours of deliberation by judges. Knox has been sentenced to 28 years in prison.

The decision comes more than two years after Knox, a Seattle native who was studying abroad in Italy when the murder happened, and Sollecito were acquitted on appeal by another Italian court. Knox and Sollecito spent four years in jail following their arrests. Knox now lives in Seattle. She had declined to attend the trial, but said in an interview with Italian state TV earlier this month that she would be waiting for the decision at her mother’s house, “with my heart in my throat.” After the verdict Thursday, she said in a statement “frightened and saddened.”

“This has gotten out of hand,” Knox said. “Having been found innocent before, I expected better from the Italian justice system.”

Kercher and Knox were both studying in Perugia in 2007 when the murder happened. Police found Kercher dead in the apartment she shared with Knox and two Italian women. Kercher’s throat had been cut and she’d been stabbed more than 40 times. Days later, police arrested Knox and Sollecito and charged them with the murder. In a trial that attracted huge media attention, prosecutors claimed that Knox, Sollecito and a local man named Rudy Guede killed Kercher in sex game gone wrong. The court in Perugia convicted the couple in November 2009. Meanwhile, a different court convicted Guede of sexually assaulting and murdering Kercher and sentenced him to 16 years in prison.

In 2011, an appeal court acquitted Knox and Sollecito of the murder due to a “lack of evidence,” and released them from prison. But Italy’s supreme court overturned the appeal verdict and called for a retrial, which began on Sept. 30 in Florence. This time around the prosecution presented much of the same evidence, yet they offered a new motive, suggesting that Knox killed Kercher over a dispute about house chores.

Lawyers for the defense presented closing arguments on Thursday morning, before the court, made up of two judges and a panel of jurors known as lay judges, retired to deliberate.

After her release on appeal in 2011, Knox returned to Seattle and began studying creative writing at the University of Washington. She also published a memoir in 2013 about Kercher’s murder, the trial and her own time in prison. The book, called Waiting to Be Heard: A Memoir, sold to HarperCollins in a deal reportedly worth $4 million. Both Knox and Sollecito, who still lives in Italy, have said in past interviews that they had hopes of leading normal lives.

Sollecito — who has sporadically appeared at the trial — will likely be arrested and imprisoned at once, but the guilty verdict doesn’t automatically mean a return to prison for Knox. Although Italy may attempt to extradite her from the U.S., it’s unclear whether the U.S. would comply with such a request due to its own double jeopardy laws. “Under U.S. law, she was once put in jeopardy and later acquitted,” Sean Casey, a former prosecutor, told CNN before the verdict. “Under the treaty, extradition should not be granted.”

Rebecca Shaeffer, an international law expert with Fair Trials International, told the Independent that if Italy sought extradition and it was “refused by the US, there are other things that Italy might do” to ensure Knox’s incarceration. “As a country seeking to extradite the person, [Italy] might contact Interpol for help or use a red notice (and international arrest warrant). This means she would be safe in the U.S. territory – but not if she travelled abroad. She could be seized were another country minded to act on the request by the Italian authorities. So traveling would be the biggest danger for her.”

But until an extradition request is formerly made and dealt with, Knox remains in limbo. 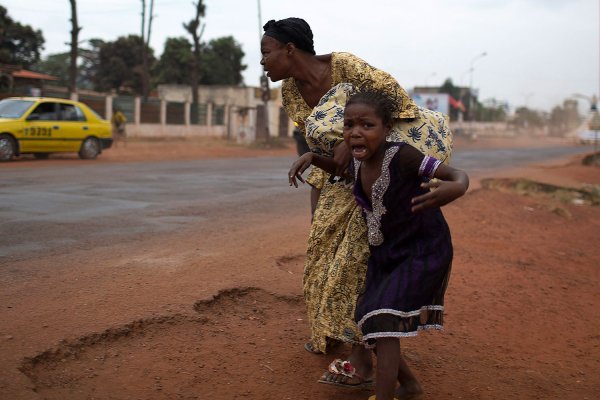 Photos: Crisis in Central African Republic
Next Up: Editor's Pick