On July 17, Ramsey Orta was talking to his friend, Eric Garner, about where to eat dinner — Friday’s, maybe, or Applebee’s. They eventually decided on Buffalo Wild Wings, but Garner never made it. Soon, a fight broke out nearby, Orta says, and after Garner helped break it up, New York Police Department officers on the scene accused Garner of selling untaxed cigarettes and attempted to arrest him.

Garner, a 43-year-old father of six who was unarmed at the time, argued with the officers about why he was being targeted. To corral Garner, one officer used what appeared to be a chokehold, a technique banned by the NYPD. Several others helped drag him to the ground. Garner, who had a history of health problems, died soon after.

Orta recorded the incident on his phone and the video has helped turn the fatal encounter from a local tragedy into a national debate over the use of force by police. Orta, 22, says he’s known Garner for several years and called him “the neighborhood dad.” Orta’s video shows what appears to be one officer pressing Garner’s face into the sidewalk as other officers attempt to subdue him. On the ground, Garner can be heard repeatedly saying “I can’t breathe.”

“I felt like they treated him wrong even after the fact that they had him contained,” Orta says.

Since Orta’s video became public after being published by the New York Daily News, the officer who grabbed Garner by the neck, Daniel Pantaleo, was ordered to turn in his badge and gun; another was reassigned to desk duty. The four emergency medical workers who responded to the scene have also been suspended without pay. New York Mayor Bill de Blasio said he was “very troubled” by the footage, and both prosecutors and the NYPD are investigating the incident.

Patrick J. Lynch, the president of the Patrolmen’s Benevolent Association, criticized the department’s response as “a completely unwarranted, kneejerk reaction for political reasons and nothing more.”

Orta recorded another violent arrest at the same location in Staten Island a week earlier. He says officers have harassed him since the Garner video became public, but he says he isn’t likely to put his camera away if something happens in his Staten Island neighborhood again.

“It just gives me more power to not be afraid to pull out my camera anytime,” he says. “Even if they’re pushing me back, I might just like keep going forward and if I get arrested, hey, I got something on camera.”

Read next: No Charges for Officer Who Put Eric Garner in Deadly Chokehold 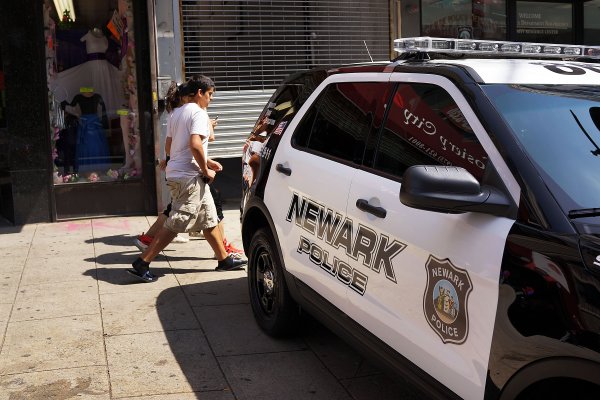 Newark Cops Censured for 'Unconstitutional Policing'
Next Up: Editor's Pick