Once HIV invades the body, it doesn’t want to leave. Every strategy that scientists have developed or are developing so far to fight the virus – from powerful anti-HIV drugs to promising vaccines that target it – suffers from the same weakness. None can ferret out every last virus in the body, and HIV has a tendency to hide out, remaining inert for years, until it flares up again to cause disease.

None, that is, until now. Kamel Khalili, director of the Comprehensive NeuroAIDS Center at Temple University School of Medicine, and his colleagues took advantage of a new gene editing technique to splice the virus out of the cells they infected – essentially returning them to their pre-infection state. The strategy relies on detecting and binding HIV-related genetic material, and therefore represents the first anti-HIV platform that could find even the dormant virus sequestered in immune cells.

MORE: Treatment as Prevention: How the New Way to Control HIV Came to Be

Even more encouraging, they also used the system to arm healthy cells from getting infected in the first place, by building genetic blockades that bounced off HIV’s genetic material. “It’s what we call a sterilizing cure,” says Khalili.

His work was done on human cells infected with HIV in cell culture, but, he believes the results are robust enough to move into animal trials and eventually into testing the idea in human patients.

The key to the strategy is the gene editing technique known as CRISPR, a way of precisely cutting DNA at pre-specified locations. CRISPR acts as a customizable pair of molecular scissors that can be programmed to find certain sequences of DNA and then, using an enzyme, make cuts at those locations. Because HIV is a retrovirus, its genetic material comes in the form of RNA; the virus co-opts a host cell’s genetic machinery to transform that RNA into DNA, which it then inserts into the cell’s genome. HIV’s genes, which it needs to survive, then get churned out by the cell.

MORE: David Ho: The Man Who Could Beat AIDS

Khalili designed a CRISPR that recognized the beginning and end of HIV’s DNA contribution, and then watched as the enzyme snipped out HIV from the cell’s genome. “I’ve been working with HIV almost since day 1 [of the epidemic] and we have developed a number of molecules that can suppress transcription or diminish replication of the virus. But I have never seen this level or eradication,” he says. “When you remove the viral genes from the chromosomes, basically you convert the cells to their pre-infection state.”

The advantage of the system lies in the fact that CRISPR can recognize viral genes wherever they are – in infected cells that are actively dividing, and in infected cells in which the virus is dormant. Current drug-based strategies can only target cells that are actively dividing and releasing more HIV, which is why they often lead to periods of undetectable virus but then cause levels of HIV to rise again. That’s the case with the Mississippi baby, who was born HIV positive and given powerful anti-HIV drugs hours after birth and appeared to be functionally cured of HIV when the virus couldn’t be detected for nearly four years, but then returned.

MORE: Rethinking HIV: After Five Years of Debate, a New Push for Prevention

Khalili admits that more work needs to be done to validate the strategy, and ensure that it’s safe. But it’s the start, he says, of a potential strategy for eradicating the virus from infected individuals. That may involve excising the virus as well as bombarding it with anti-HIV drugs. “We can get into cells, eradicate the viral genome, and that’s it,” he says. 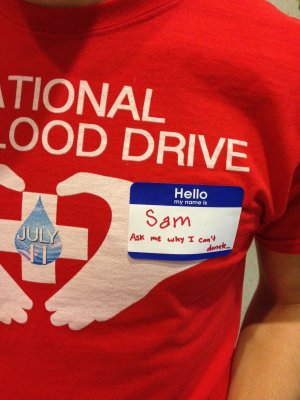 This Blood Drive Is Fighting the FDA Ban on Gay Donors
Next Up: Editor's Pick