Rebel forces handed over Flight 17’s black boxes to Malaysian investigators in the rebel stronghold of Donetsk on Monday, hours after Malaysian Prime Minister Najib Razak struck a deal with the separatists.

The leader of the investigative team reported that the boxes were in good condition, the BBC reports.

Najib announced on Monday that he had reached an agreement with the leader of a pro-Russian separatist group to return victims’ bodies, hand over the jet’s black boxes and let independent international investigators gain access the site where Malaysia Airlines Flight 17 was shot down last week.

A train containing remains of some of the bodies arrived in Ukraine’s second city of Kharkiv early on Tuesday, as per the arrangement, and were due to be flown to Amsterdam. Dutch Prime Minister Mark Rutte said his government expects them to arrive on Wednesday, the Associated Press reports, and that the identification of some victims’ bodies could be quick while others may take “weeks or even months.”

Remains of Malaysian citizens will be flown home, Najib said.

The Malaysian leader announced in a Facebook post Tuesday that the final stipulation of the deal—a full investigation of the crash site—has yet to be fulfilled, but he called the agreement a “breakthrough.”

“I am pleased to confirm that the first two conditions have now been met,” Najib said. “We are closer to finding out what happened to [the] aircraft, and fulfilling our shared responsibility to those who lost lost their lives.”

The prime minister said he and Alexander Borodai, the self-appointed “Prime Minister” of the “Donetsk People’s Republic,” had reached a deal on “securing evidence from the aircraft, launching an independent investigation and above all recovering the remains of those who lost their lives.”

Najib said Monday that despite the tentative agreement, “there is work still to be done … which relies on continual communication in good faith.” He called on all parties to “continue to work together to make sure this agreement will be honored,” adding that “only then can victims be afforded the respect they deserve.”

“For the families, nothing can undo this damage,” said the Prime Minister, who reportedly lost a relative in the crash. “The lives taken cannot be given back. The dignity lost can’t be regained. My heart reaches out to those whose loved ones were taken on MH17.”

Borodai used a press conference before the handover of the black boxes to deny any involvement in the accident, The Guardian reports. Instead, he said, the Ukrainian government had “both the technical ability and the motive” to shoot down the plane. 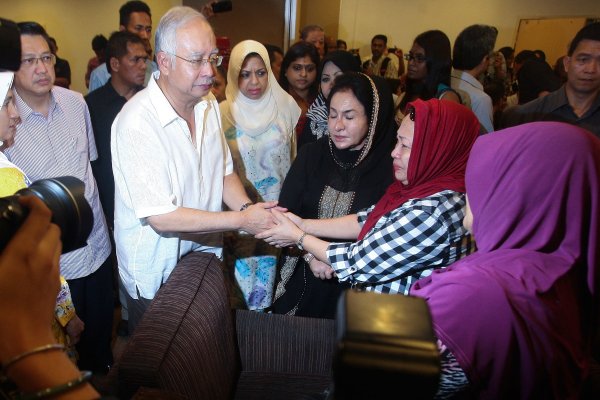