The Lives Lost in the MH17 Disaster

Local people pray during a special mass in Saint Vitus Church in memory of the victims of Malaysia Airlines flight MH17 on July 20, 2014 in Hilversum, Netherlands.
Christopher Furlong—Getty Images
By Aleksandra Gjorgievska

A total of 298 lives—including over 20 families and as many as 80 children—were lost when flight MH17 was apparently downed by a surface-to-air missile on Jul. 17. A German aerospace engineer, a leading Dutch AIDS researcher, an Australian nun, and a Malaysian actress were among the passengers on board when the flight crashed over eastern Ukraine, near the settlement of Grabovo. Malaysia Airlines released the passenger manifest on Saturday, revealing that nationals of 12 countries were traveling on the Kuala Lumpur-bound plane.

Here is a breakdown of the victims’ nationalities:

193 from the Netherlands, with one passenger carrying a dual Dutch-U.S. citizenship

43 from Malaysia, including all crew members

10 from the United Kingdom, with one passenger carrying a dual U.K.-South African citizenship

Here are just some of the individuals who lost their lives in Thursday’s incident:

Father Jeroen, mother Nicole, 17-year-old Brett, 15-year-old Jinte, 12-year-old Amèl, and 9-year-old Solenn were from the small town of Neerkant. Before Thursday’s flight, Jinte tweeted her excitement about flying to Malaysia: Over uurtje in t vliegtuig naar Maleisië! (In an hour, I will be in the air to Malaysia!) The father, Jeroen, had been a fan of cycling. Neighbors of the family told Dutch newspaper Algemeen Dagblad that they could not believe they would “never again … see Jeroen bring out the bicycle for his daughter.” Solenn, the family’s youngest member, had been allowed to skip a year in St Willibrord primary school, which all four children attended, due to her extraordinary abilities.

A portrait of Neeltje Tol and Cor Schilder is placed with flowers and candles in front of their flower shop in Volendam, Netherlands,July 19, 2014.
Phil Nijhuis—AP

The couple owned a flower shop in the town of Volendam, where locals have been laying flowers in their honor since the crash. They were on their way to a vacation in Bali, Indonesia, Channel 4 News reports. Shortly before take-off, Schilder posted a photo of the plane on his Facebook wall, commenting in Dutch that “in case it goes missing, this is what it looks like”—he was referring to the disappearance of Malaysia Airlines Flight 370 in March. In May, he wrote of the couple’s upcoming trip: “We will stay in a villa with a private pool with rose petals floating in it. We won’t leave before all those petals have withered away.”

The 19-year-old had been studying business in Amsterdam and playing football for a local club, Olympia ’25. He was born in New York, but his family moved to Europe soon afterward, and Schansman spent the rest of his life there. A fan of the Dutch soccer team Ajax, he was on his way to meet his family for a three-week vacation in Indonesia, the birthplace of his grandfather, according to a relative. His social media accounts show that he had a girlfriend and was adventurous and fun-loving.

Dalziel, reportedly in his mid-40s, was a helicopter pilot who lived in Malaysia with his wife and two children, aged 4 and 14. A South African citizen born in Zimbabwe, he was traveling on a British passport. His brother-in-law Shane Hattingh has said that Dalziel took a position with CHC Helicopters in Malaysia last year in order to spend more time with his wife and kids, as he had previously been flying around the world, unable to see them for extended periods of time. One of his former colleagues posted on Twitter that Dalziel was “one of [the] world’s best rescue helicopter pilots” and a “great man, father, [and] husband.”

Adi Soejipto, an Indonesian of Dutch descent, had been planning to celebrate her 74th birthday in Jakarta, where she lived with her adopted son, after visiting relatives in the Netherlands. She and her late husband, who passed away two years ago, did not have any children of their own. They stayed in Indonesia when her parents and six siblings moved to the Netherlands in 1963. She spent the last months of her life in the Netherlands with her sick mother, who died during the visit.

Allen family, the UK and the Netherlands

A bunch of flowers with a picture and a message for John Allen, a British lawyer who died with his Dutch wife and three sons on flight MH17, is placed at Schiphol airport, in Amsterdam, July 20, 2014.
Patrick Post—AP

John Allen, his wife Sandra Martens and their three sons Christopher, Julian and Ian—whose ages ranged from 8 to 14—lived in Amsterdam and were headed to Indonesia for a vacation. Allen, a British lawyer, worked at the Dutch law firm Nauta-Dutilh, which in a statement on its website said that “all … who had the privilege of working with John during his 18 years at NautaDutilh came to know him as a kind, down-to-earth and humorous man.” Sandra Martens, who was Dutch, worked as an elementary school teacher.

77-year-old Tiernan was a Roman Catholic nun returning to Sydney from a retreat in France. She worked at the Kincoppal-Rose Bay School of the Sacred Heart near Sydney, where she had taught for over 30 years. In a statement, the school’s principal said that sister Tiernan—known as “Phil”—had visited St. Francis Xavier Church in Paris, the burial site of the Society of the Sacred Heart’s founder Saint Madeleine Sophie Barat, adding that the visit was “a special moment” for Tiernan. “Phil was a very much loved staff member and friend. We are devastated by the loss of such a wonderfully kind, wise and compassionate woman who was greatly loved by us all,” principal Hilary Johnston-Croke said.

The family of six—Tambi Jiee, 49; Ariza Ghazalee, 46; Afif, 19; Afzal, 17; Azmeena, 15; and Afruz, 13—was returning to Malaysia after spending three years in Kazakhstan, where Tambi Jiee had been working for the energy company Shell. The three youngest children, Afruz, Azmeena, and Afzal, had attended school in Kazakhstan, while the eldest, Afif, had been attending Taylor University in Kuala Lumpur, and had joined his family for a vacation in Europe prior to their trip home, according to the Wall Street Journal. Ariza’s final Facebook post on July 17 was a photo of the family’s suitcases.

The leading Dutch AIDS researcher, along with five other passengers on board, was en route to the International AIDS Conference in Melbourne, Australia—the largest AIDS conference in the world. During the opening ceremony on Sunday, speakers commemorated the lives of their lost colleagues. Lange, 59 and his partner van Tongeren, 64, had both worked at the Amsterdam Institute for Global Health and Development—he as its executive scientific director and she as a communications director. Lange was also a professor of Medicine at the University of Amsterdam, where he had recently been working on a paper about medical research in Africa, according to the AIGHD’s website.

Alder and Sweeney were ardent Newcastle United fans on their way to New Zealand to watch their favorite team’s preseason tour. Sweeney, 28, had previously volunteered as a steward on fan buses to Newcastle’s away games, and was thus well-known among the teams’ supporters. His father, Barry, told the BBC that “football was his life,” adding that he’d “rather it was [him] sitting on that plane … because he was only 28.” Alder, 63, had reportedly seen all but one of Newcastle’s matches in 50 years. Newcastle’s managing director expressed his condolences to Alder’s and Sweeney’s families and said that “both men were dedicated supporters of our club and were known to thousands of fans and staff alike.” 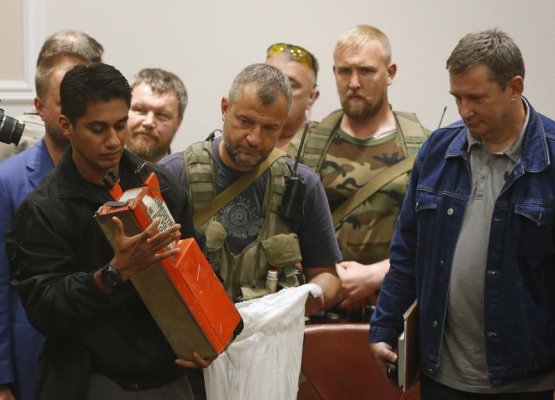 Black Boxes Handed Over
Next Up: Editor's Pick