When Kanye West spoke to GQ magazine last month, it was mere days after his news-making wedding to Kim Kardashian. Now, though it may already seem that married-Kimye has existed since the beginning of time, the results of that conversation — including new information about the wedding — are finally available for public consumption at GQ.com. The many things can be learned include:

West has a new album on the way, but he’s not sure he wants to be the biggest name in rap: In addition to a forthcoming menswear line, West is working on an album. He still doesn’t have a release date, though September looks like a possibility. But, he says, Drake is now the most popular artist in the genre — and when asked whether he feels the urge to best his rival, he equivocates. “It’s a real question for me,” he tells GQ. “Do I want to?”

His speech at his wedding was about the state of celebrity: Though wedding toasts are more typically the land of drunk maids-of-honor recounting embarrassing stories, West himself spoke for an extended period of time at his reception. Though previous accounts had said that he talked about himself, he says that what he discussed was “the idea of celebrity” and how he and Kardashian planned “to find to raise the respect level for celebrities so that [their] daughter can live a more normal life.” There’s a class system among celebs, he said, with people like the Kardashian family not as well respected as high-fashion figures or film auteurs; both of those groups were represented at the wedding (by Carine Roitfeld, whom West calls “the Walt Disney of what Tumblr is today,” and Steve McQueen), all spending time together. West plans to erase the lines between which the celebrities who receive respect from audiences and paparazzi and those who don’t.

He wants to make being a dad cool: West admits that he doesn’t like to do anything that might be perceived as uncool, but he also knows that he has “the ability to make things cool.” The next thing on his list is being a family man. “Going home to one girl every night is super cool,” he says. He also shares the reasons he fell for that girl: her body, face, style, niceness, financial independence and family-orientedness. (Also of note: West apparently calls her “Mom.”)

He’s a blowfish: “I’m not a shark, I’m a blowfish,” West says, speaking of his relationship with the paparazzi — meaning that he doesn’t go after anyone, but he will defend himself when necessary. He also compares himself to a porcupine to make the same point.

He’s a fan of Step Brothers: He is, he says, the ultimate embodiment of a motivational speech from the 2008 Will Ferrell comedy Step Brothers. Even as his star rose, he says, he never lost track of what he was looking for in a relationship — his, as he puts it, dinosaur:

There’s more where that came from — including West’s take on which of his tracks contains the best rap verse ever — over at GQ. 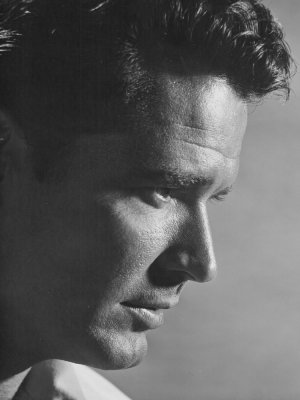 James Garner's Life in Photos
Next Up: Editor's Pick