Children Suffer as War Continues in Gaza and Israel

The father of 18-month-old Razel Netzlream, who was fatally wounded during an air strike, carries her body right before her funeral in Rafah, Gaza Strip, on July 18, 2014
Alessio Romenzi
By Megan Gibson

As the conflict in the Gaza Strip and Israel moves into its third week, the impact of the fighting on Palestinian and Israeli children has become a heart-breaking signature of the conflict. Reports from Gaza relay stories of shells destroying civilian homes, killing children sheltering within; of tank fire killing a 5-month-old baby; of a strike on a beach killing four young boys who had been kicking around a soccer ball. In Israel, parents hear the first wail of air-raid sirens, grab their frightened children and run for bomb shelters.

After two weeks of aerial attacks by the Israel Defense Forces (IDF) against the Palestinian militant group Hamas in the densely populated Gaza Strip — followed by a ground offensive that began last week — the statistics are just as grim as the news reports. UNICEF’s communications chief in Jerusalem, Catherine Weibel, says that according to U.N.’s figures at least 121 Palestinian children under the age of 18 have been killed since the conflict started on July 8, making up a full one-third of Palestinian civilian casualties. Between July 20 to July 21 alone, she says, “there were at least 28 children killed in Gaza.”

The conflict, which was, in part, precipitated by the killing of children — first the murder of three Israeli teens in late June and then one Palestinian teen earlier this month — has so far claimed the lives of a further 479 Palestinians and 27 Israelis, according to the latest U.N. figures. But it’s perhaps the escalating toll on innocent children that has drawn the greatest concern from human rights organizations, world leaders and critics of both Hamas and Israel. In a press conference on July 22, U.N. Secretary-General Ban Ki-moon called for a cease-fire, saying that “too many Palestinian and Israeli mothers are burying their children.” The day before, U.S. President Barack Obama said in a press conference that there was an urgent need to “stop the deaths of innocent civilians.”

In response to the outcry over the loss of children’s lives — much of it directed toward Israel — the Israeli military has said that it has gone to extensive lengths to prevent civilian deaths, while psychologists in Israel point out that the conflict has taken a toll on Israeli as well as Palestinian children.

Lieut. Colonel Peter Lerner, a spokesman for the IDF, tells TIME that Israel has made efforts to “encourage people to leave areas that were potential combat zones” by releasing leaflets, sending texts and making phone calls before the IDF launched its ground offensive. Lerner says that civilians are never the targets. “Some of the targets have been civilian homes that have been utilized for command and control positions by terrorists,” he says.

Bill Van Esveld, a senior researcher at Human Rights Watch who is based in Israel, the West Bank and Gaza, tells TIME that “given the fact that more than 50% of Gaza’s population is under 18 years old,” any attacks on the region’s densely packed residential areas are likely “going to harm civilians [and] chances are, given that population ratio, going to be killing kids.”

Given the large, young population in Gaza, experts say that many children are likely suffering from symptoms of trauma, even if they haven’t been physically injured. The U.N. Office for the Coordination of Humanitarian Affairs (OCHA) says that “at least 72,390 children require direct and specialized psychosocial support (PSS) on the basis of families who have experienced death, injury or loss of home over the past 10 days.” OCHA also expects that number to soar.

An Israeli mother and her son run to a bomb shelter as the siren goes off in Ashkelon, Israel, on July 14, 2014.
Ilia Yefimovich—Getty Images

So far no Israeli children have been killed in the conflict and there are no reports of injuries. But Israeli activists and researchers report that the conflict has traumatized children on both sides of the walls and fences that separate Gaza from Israel. Hamas has fired 2,000 missiles into Israel, according to the IDF, since the conflict began. Says clinical psychologist Yotam Dagan, the international cooperation director at Natal, an Israeli nongovernmental organization that treats victims of trauma related to war and terror: “It’s not just an Israeli problem and it’s not just a Palestinian problem — children are children are children, everywhere. Whenever hostilities break, you know the fire starts to blow [and] children are the first and the most likely to be affected by the situation.”

Irwin Mansdorf, an Israeli psychologist and fellow at the Jerusalem Center for Public Affairs, says that Israeli children exposed to attacks by Hamas are susceptible to “real clinical symptoms as a result of real, distressing events.” According to both psychologists, the symptoms of trauma in children, much like in adults, can include nightmares, flashbacks, detachment, anxiety, depression or acting out and regression.

Some Israeli children are also dealing with being displaced from their homes. Roni Taronski, 12, is seeking refuge — along with her mother, grandmother and aunt — in a boarding school about 11 miles (18 km) southeast from her home in Kibbutz Mefalsim, which is only a mile from the Gaza border and has become a target of Hamas rocket fire. “It’s not that we don’t want to go, everybody wants to go home,” she tells TIME. “We’re not allowed. Our houses are [like] a military base right now.” When asked how she’s feeling so far away from home, Roni says she’s homesick. She then adds, “I’m really scared.”

In Gaza, Samira Attar, a 13-year-old girl from the Beit Lahia neighborhood, is among the 100,000 Palestinians who are now displaced and seeking refuge in an U.N. Relief and Works Agency (UNRWA) school, where her mother Souad, says the sound of shelling keeps the family awake at night. “I hate this school,” Samira tells TIME. “I want to play with my cousins and sisters and live normally like others.”

Twelve-year-old Shahd Majed lies on a bed in Gaza City’s Shifa Hospital, her leg injured by shrapnel from a shell or bomb that exploded near her house on July 21. “I hate the war,” she says. “I want it to end please. I want to return to normal life. Please let us live.”

— With reporting by Hazem Balousha / Gaza

Correction: An earlier version of this story drew a premature conclusion about the source of the Israeli attack that killed four boys in Gaza. Israel is still investigating the strike. 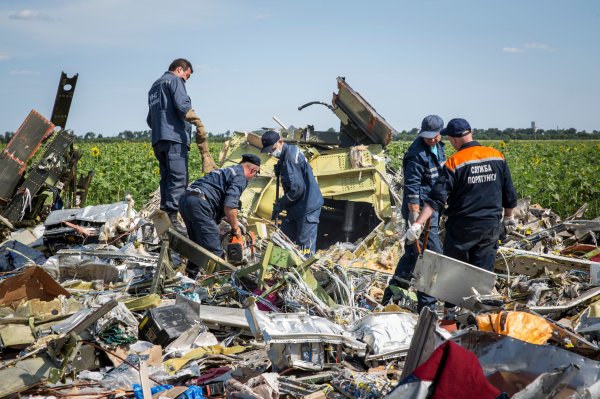 Rebels' Control of the MH17 Crash Site Could Foil an Investigation
Next Up: Editor's Pick