Zulrusdi bin Haji Mohamad Hol dressed for iftar dinner with other relatives of MH17 victims at Marriott Hotel in Putrajaya, Malaysia, on July 20, 2014. Zulrusdi's cousin was returning after a three-year work stint in Kazakhstan with his wife and four children on July 17, when the Malaysia Airlines plane they were traveling with was shot down midair over eastern Ukraine.
Per Liljas
By Per Liljas

Update: This story was updated at 22:45 ET on July 22 to include an official quote on the correct handling of dead bodies in Islam.

Dusk settles and Malaysia comes together to break the daily fasting of Ramadan. Hundreds of people in elegant attire mill about the lavish iftar buffet at Marriott Hotel in Putrajaya, 25 km south of Kuala Lumpur. Two floors down, however, the mood is less festive. There, MH17 relatives gather around tables in one of the conference rooms and yearn for a completely different religious observance.

“We need to get the bodies home to expedite the burials,” says Zulrusdi bin Haji Mohamad Hol, whose cousin was on the plane together with his whole family. “Otherwise, how will our family members get peace?”

Four days after Malaysia Airlines flight 17 from Amsterdam to Kuala Lumpur was shot down over eastern Ukraine, pro-Russian rebels who control the area have piled almost 200 corpses into refrigerated boxcars and used cranes to move chunks of the downed aircraft. International investigators still have limited access to the crash site, and Western governments have condemned the separatists for tampering with the scene.

A rebel leader said Sunday that they will hand over the bodies to the International Civil Aviation Organization, yet that depends on an as yet nonexistent cooperation between rebels, the Ukraine government and international investigators. A government-appointed counselor at the Marriott says he has to shield relatives from media coverage from Ukraine. Zulrusdi has caught images of remains putrefying on the fields, and rebels carrying away bodies in plastic bags. International media has carried reports of victims’ luggage and personal belongings being rummaged through and possibly looted.

“I’m very angry,” Zulrusdi says. “They’re inhumane, they don’t understand. First they murder our relatives then they keep the corpses with them.”

Pressure is mounting on Russia to take a firmer role in securing the investigation and recovery of bodies. The U.S. has been particularly harsh in their allusions to Russian culpability. On Sunday, the embassy in Kiev stated that “MH17 was likely downed by a SA-11 surface-to-air missile from separatist-controlled territory in eastern Ukraine,” that Russia had sent “a convoy of military equipment” to the separatists over the weekend of July 12-13, and that Moscow had trained the rebels in the use of air defense systems.

However, officials in Malaysia have chosen a more cautious tone.

“Culpability is only the third priority of the Malaysian government,” says Bridget Welsh, senior research associate at the Center for East Asia Democratic Studies of the National Taiwan University. “It would be counterproductive for their goal of bringing back the bodies to take a harder position on Russia now.”

James Chin, professor of political science at Monash University, says that Prime Minister Najib Razak has put himself in a bind by promising to recover the bodies from MH17 before next week, when the fasting period of Ramadan ends.

“It will be almost impossible to do this, and it will show how powerless Malaysia is in a situation like this, involving big players like the U.S. and Russia,” he says.

A Malaysian team is currently in Ukraine to take care of the Muslim bodies, equipped with kafan, the ritual cloth that remains should be wrapped in.

“The way the bodies were handled by the separatist has not only made us angry but has saddened us,” Othman Mustapah, director general of the Department of Islamic Development, tells TIME. “Islam places great emphasis on respecting the dead body. Not only must burial rites be managed properly, with care and in a civilized manner, the bodies must be washed, wrapped in kafan and buried as soon as possible.”

Dr Mohammad Asri Zainul Abidin, former mufti of Perlis province, adds: “If you cannot find the body, there is a special prayer that can be read. As for the relatives of MH370, it’s been up to them to decide when to do that.”

The next-of-kin at the Marriott Hotel continue to fast, join for iftar in the evening and pray that the remains of their relatives will soon be retrieved. Zulrusdi knows that in this process, his government only has limited power.

“It’s like the Malaysian saying, when the elephants fight, the little animals get trampled underfoot.” 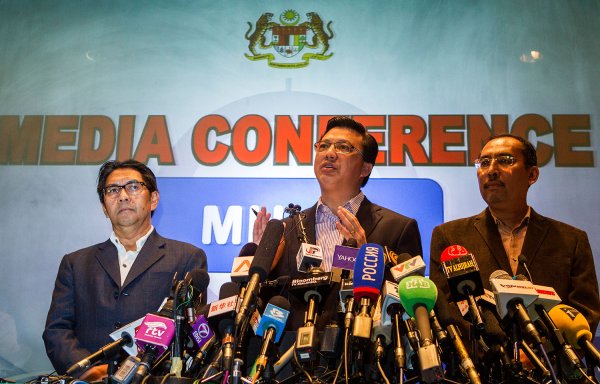