The BRICS Don’t Like the Dollar-Dominated World Economy, but They’re Stuck With It

When the BRICS get together for their annual summit — as they did last week in Brazil — they always make a lot of noise about changing the way the global economy works. They have good reason to be frustrated. The BRICS (Brazil, Russia, India, China and South Africa) are gaining in economic power and crave the political clout to match, but standing in the way is a global financial system organized by the West and dominated by the U.S. They’re forced to conduct their international business in the unstable U.S. dollar, making their economies swing back and forth with the winds of policy crafted in Washington, D.C., and New York City. The West has ceded influence in institutions like the World Bank and the International Monetary Fund (IMF) only grudgingly. To them, today’s financial system is out of touch with the changing times, and ill-suited to support the world’s up-and-coming economic titans.

So in their summit, from July 14 to 16, the five BRICS announced two major initiatives aimed squarely at increasing their power in global finance. They announced the launch of the New Development Bank, headquartered in Shanghai, that will offer financing for development projects in the emerging world. The bank will act as an alternative to the Washington, D.C.—based World Bank. The BRICS also formed what they’re calling a Contingent Reserve Arrangement, a series of currency agreements which can be utilized to help them smooth over financial imbalances with the rest of the world. That’s something the IMF does now.

Clearly, the idea is to create institutions and processes to supplement — and perhaps eventually supplant — the functions of those managed by U.S. and Europe. And they would be resources that they could control on their own, without the annoying conditions that the World Bank and the IMF always slap on their loans and assistance. Carlos Caicedo, a Latin America analyst at consulting firm IHS, noted, for instance, that the New Development Bank “has the potential to match the role of multilateral development banks, while offering the BRICS a tool to counterbalance Western influence in international finance.”

In theory at least, the BRICS possess the financial muscle to make that happen. Four of the BRICS — China, India, Brazil and Russia — are now ranked among the world’s 10 largest economies. (South Africa, not a member of the original constellation of BRICs as conceived by Goldman Sachs, comes in a distant 33rd.) Yet the reality is more problematic. The BRICS at this point are simply not committing the resources necessary to make anything but a dent in global finance.

Research firm Capital Economics estimates that the New Development Bank, with initial capital approved at only $100 billion, could offer loans of $5 billion to $10 billion a year over the next decade. Though that’s not an insignificant amount, it’s far lower than the $32 billion the World Bank made available last year. The situation is the same with the currency swaps. Set at a total size of $100 billion, the funds available would be a fraction of those the IMF can muster.

That’s assuming these initiatives ever get off the ground. This sixth BRICS summit is the first to produce anything beyond mere rhetoric, and it remains to be seen if they can cooperate on these or any other concrete projects. Despite their common distaste for the U.S.-led global economy and desire for development, the BRICS share as many differences as similarities. They have vastly diverse levels of development and types of political systems, and the bilateral relations between some of them are strained. India and China, for instance, routinely spar over disputed territory, while Brazil sees China as much as an economic competitor as partner.

Beyond that, all of the BRICS have serious economic problems to deal with at home. The new government in India led by Prime Minister Narendra Modi will be hard pressed to implement the reforms necessary to jumpstart the country’s stalled economic miracle. Growth in Brazil, South Africa and Russia has been even more sluggish. China’s growth has held up, but it suffers from rising debt, risky shadow banking and excess capacity. And now Moscow has to contend with sanctions imposed by the U.S. and Europe over its aggressive policy toward Ukraine. It may soon face even greater isolation as the world probes its connections to the separatists in Ukraine, who reportedly downed Malaysian Airlines Flight 17 with the loss of nearly 300 lives.

Meanwhile, whether they like it or not, the BRICS will be stuck operating by the rules of the U.S.-led world economy for the foreseeable future. There is simply no other currency out there that can replace the U.S. dollar as the No. 1 choice for international financial transactions. China has dreams of promoting its own currency, the yuan, as an alternative, and has made some progress. But the yuan can’t truly rival the dollar until China undertakes some fundamental financial reforms — liberalizing the trade of the yuan and capital flows in and out of the country. That’s far-off. And until then, China’s massive reserve of dollars forces it to continually invest in dollar assets. Even as Beijing bickers with the U.S. over cyberspying and regional territorial disputes, it has been loading up on U.S. Treasury securities — buying at the fastest pace on record so far this year.

Still, the steps taken during this latest BRICS summit point to what may be the future of the global economy. Though their initiatives may be small and tentative now, they signal an intent to remake the global financial system in their own interest as they continue to grow in economic power. Perhaps one day it’ll be the U.S. that does the complaining. 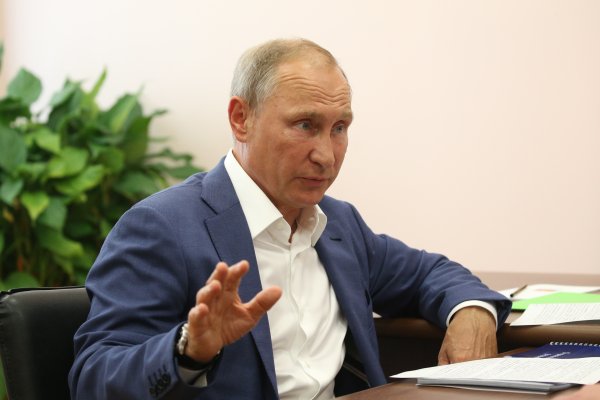 Putin Says Trump's Approach to North Korea Is 'Futile'
Next Up: Editor's Pick