During a cease-fire, Palestinian medics look for survivors in Gaza's Shujaiyeh district after a night of Israeli heavy shelling on the neighborhood
Alessio Romenzi
By Ilene Prusher / Jerusalem and Hazem Balousha / Gaza

If you look at most maps of Gaza, you won’t find the neighborhood of Shujaiyeh on it. But the name of the neighborhood on the eastern edge of Gaza City will likely go down in history as a particularly horrific point in a war between Israel and Hamas that only seems to get bloodier and more bitter by the day.

Each side has its own story, and they differ so substantially that it is almost a déjà vu of the terrible bloodshed in the West Bank city of Jenin in 2002: Palestinians called it a massacre, Israelis said it was a battle.

This much is clear: the Israeli army laid siege to the Gaza neighborhood of Shujaiyeh late Saturday night and throughout the early hours on Sunday, shelling it with artillery blasts as well as air strikes and helicopter fire. Israel Defense Forces (IDF) soldiers also went in on foot and had heavy exchanges of automatic gunfire with Hamas militants. At least 501 Palestinians have been killed, according to figures from the Palestinian Ministry of Health. The IDF also released its grim death toll: 13 soldiers were killed in the fighting.

For Jalal Ghouleh, 47, it was one of the worst nights of his life. He’d been receiving messages from the army — by telephone and by leaflet — to leave Gaza City for days, but he could think of nowhere to run: Palestinians seeking shelter have already packed U.N. schools in the Gaza Strip, with more than 50,000 displaced people sleeping on classroom floors and in courtyards.

The shelling starting at 9 p.m., and it never seemed to stop.

“We were about 65 people in the same building, children, parents, aunts and uncles. We all went down to the ground floor. The shelling and shooting just keep going all night and I thought, ‘We’ll die in this house, we have to get out,’” says Ghouleh. After six harrowing hours, there seemed to be a lull in the fighting. So they decided to make a run for it, leaving the house en masse and scurrying on foot to Shifa Hospital. It was the only place they could think to go that would theoretically be safe.

By midmorning, they were evacuated to a U.N. school, where there was hardly space for them to stay. When a humanitarian cease-fire was declared at 1:30 p.m., Ghouleh came back to their building on the main drag of the neighborhood to collect a few key belongings. A neighbor, Raed Zaqout, had also come back to throw a few valuables and items of clothing into a bag, not knowing when they would be home again. They returned to a street with half-destroyed buildings, burnt-out cars, felled trees, downed electricity poles. The ground was a charred crumble of rubble and shrapnel. The worst, he said, was the inability to help others. “We saw bodies lying in street, maybe some of them just badly injured, but it was such chaos trying to carry out our children and escape that we couldn’t help others,” Ghouleh said.

At the overcrowded Shifa Hospital, families searched frantically for people who were missing and sought treatment for the many wounded. One of the injured was a 4-year-old girl name Ritaj, who was in the emergency room wearing pink pajamas and being treated for shrapnel injuries to her leg. “I lost my brother, I lost my brother,” she repeated over and over again. Her mother sat in the seat next to her, crying.

A little over an hour’s drive north from the hospital, in the Tel Aviv suburb of Hod HaSharon, another child was crying. Uri Greenberg, 10, was bidding a final farewell at his father’s funeral: Major (res.) Amotz Greenberg, 45, was one of Israel’s first casualties of the war. He and another Israeli soldier were killed on Saturday — and four more wounded — after Hamas militants who had infiltrated Israel through an underground tunnel opened fire on them.

“Dad, once you seemed like superman. Now you are superman,” said the redheaded boy between sobs.

While the first two soldiers to die in the current conflict were buried, the news of the losses the IDF sustained in Gaza stretched across Israel. The loss of 13 elite Golani Brigade soldiers in a single day — 15 more soldiers were injured, four of them seriously — was heavy news that served as a kind of grim reality check of what is to come. This was no weeklong flare-up like 2012’s Operation Pillar of Defense. The stakes are high, there is no immediate end in sight, and it would be almost inappropriately euphemistic to call it an “operation” rather than a war.

IDF spokesman Peter Lerner tells TIME that Israel sustained relatively heavy losses because Hamas militants were intent on trying to defend what was far from a regular neighborhood.

“It’s a Hamas stronghold, a fortified position, a fortress of tunnels that extend from houses to rocket launchers to caches of rockets that are concealed underground. Eight percent of the rockets in the past 12 to 13 days were launched from there,” Lerner says. “The difference in what happened there, compared to previous days, is that we met huge resistance in the form of rocket-propelled grenades, antitank missiles and automatic fire from AK-47s and other machine-gun fire coming from all the houses, targeting our forces. It was substantial, and that’s why we provided air and artillery support.”

Could Israel not have worked harder to avoid the civilian casualties? Lerner says the IDF tried to get people to leave the area. “For the last three days we’ve been urging Palestinians from Shujaiyeh and other places to leave the vicinity. But Hamas urged the population to stay, and the situation is unfortunately that this developed as it did.”

In the evening, Israeli Prime Minister Benjamin Netanyahu held a press conference with his Defense Minister, Moshe Ya’alon. Netanyahu sought to comfort the grieving families and the somewhat stunned nation, but also to boost morale for a military campaign that he indicated was far from over.

“We bow our heads to those who fell so that we can continue our existence in the State of Israel. There isn’t a more just war than the one our sons fell in than this war,” Netanyahu said. “In every battle there are difficult periods, but despite this the ground campaign will expand and continue until the quiet returns to the citizens of Israel.” So far, 1,700 rockets have been fired at Israel, which suffered only one civilian death before the IDF soldiers were killed this weekend. The Palestinian death toll in Gaza has soared to 434 since the most recent wave of violence began a week and a half ago, according to Reuters, citing health officials in Gaza.

Meanwhile, regional leaders met in Doha Sunday to hold talks on cease-fire possibilities, following a failed Egyptian-brokered effort last week. Palestinian President Mahmoud Abbas arrived in Qatar to discuss a cease-fire with Hamas leader Khaled Meshaal, and U.N. Secretary-General Ban Ki-moon was there later on Sunday to help push truce efforts. The Obama Administration also tried to beef up its efforts, with U.S. Secretary of State John Kerry due to travel to Cairo to seek a truce based on the November 2012 cease-fire agreement. That one kept the peace — for a year and a half, anyway. 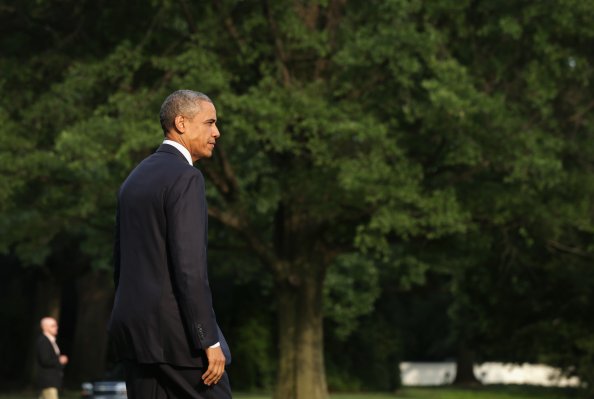 Obama Has 'Serious Concern' About Mounting Casualties
Next Up: Editor's Pick